Numbering the People.
Christian Scientists shall not report for publication the number of the members of The Mother Church, nor that of the branch churches. According to the Scripture they shall turn away from personality and numbering the people.

My wife and I paused to view the mountain scenery in an isolated area of Idaho. We were startled to notice on a trail below, a wild wolf wandering toward us. Margie and I were standing perhaps four or five feet apart as he approached, looked me right in the eye, and cautiously strode between us as he loped on up the side of the mountain.

Ordinarily that would have been the most memorable event about our visit to this area. But it wasn’t. Ohhh, you may be thinking, Did a grizzly come along next? No, something very different. Nearby was an old place that looked as if it had been vacated long ago. The thing that stays most vividly in my memory is what was hanging on the door handle. An aging census form!

That’s right. Someone had made his or her way to this remote place, who knows how long ago, and left the census questionnaire in hopes that maybe it would be filled out. There were probably plenty of wolves in those mountains, but my guess is that we wouldn’t have seen any other census forms around! To me, it was a kind of symbol. This illustrated how vital someone felt it was that every possible individual be counted.

When you’ve read the Bible’s Old Testament, you may have noticed how important some felt it was to get a count of the people belonging to the various tribes. That importance of counting still lingers in thought. But in those early days a large number of people wasn’t always of prime
importance. Sometimes a small band, or even one or two individuals, could be a powerful force. When Mary Baker Eddy established Christian Science, she provided more than one of those “look away” or “turn away” points of guidance. In Science and Health with Key to the Scriptures, she calls on us to “look away” from the body to Truth and Love if we want progress (see p. 261). And then in her Church Manual, she indicates the value of turning away from numbering the people if we want progress unimpeded.

Take a look at the wording of Article VIII, Section 28 (Church Manual, p. 48). Initially the By-Law was titled, “No Census-taking,” but was changed to “Numbering the People.” In a June 15, 1908, letter from Mrs. Eddy’s secretary, Adam Dickey, to her Committee on Publication, Alfred Farlow, Dickey requests “that no more mention be made in the public press of the statistics of our Church … Our Leader says statements of this sort arouse the enemy and provoke opposition and we should conform to the scriptures,—‘Boast not thyself’ ” (L01570, The Mary Baker Eddy Collection, The Mary Baker Eddy Library). A short time later, the new By-Law with its “turn away” features was adopted. While the quote from Proverbs (chap. 27, verse 1) was not incorporated, the spirit of this Old Testament precept surely was.

OK, it’s clear that our Church is not going to push forward with human determination like that census taker in the mountains did, to get a complete count for a public record. But should we just ignore the body, either the individual or collective body? And this question is especially relevant if either body isn’t thriving. So, is our church body thriving? In some ways, a case could be made that there are flourishing elements in our movement. But on the point about “numbering the people,” well, there have been fewer bodies to count during the last half century.

We don’t need to publish numbers to get the message when a lot of church pews are empty or when subscriptions to our publications have declined over recent decades. This is true of many denominations of Christianity itself. But it doesn’t have to remain true for The First Church of Christ, Scientist.

Other denominations may ask each of their members to "go out and get"—that is, convert someone so that their congregation will become larger. The request of this Church would be closer to "go out and give"—that is, heal someone in need of the Christ.

Some in our Church have pointed out the Gideon lesson in the Bible (see Judges 7). His troops are trimmed until there is a lean, mean core of committed fighters. Fair enough. Nevertheless, it is reasonable to feel the time has come for us again to have a growing membership.

Normally, as a reader of this magazine, you would finish an article and walk away, satisfied that you have received some inspiration to help make your day. But this piece is going to do a little more asking of you than giving to you. As Clerk of The Mother Church and on behalf of the Christian Science Board of Directors, I’m inviting you, as a member or friend of the Church, to pray about our membership. Does this mean something dramatic is happening to our Church? No, but it does indicate that we feel a gradual, longtime decline in membership deserves to be specifically addressed by the membership itself.

So, does this suggest you are being asked to pray for more members? Well, I’d say that has too much the flavor of “numbering the people.” But this request does encourage you to take a moment right now, before you set this Journal aside, and defend the progress of those who have become members, as well as the rights of those who would normally join, but are being artificially stopped from taking the step.

Some of you will go further and take up Christian Science treatment for our membership on a more consistent basis. Others will share their spiritual thoughts in an article,
an insight, or a letter to the editor of the Journal. A few outsiders who learn of this call for prayer and who feel unsympathetic toward Christian Science may seek to nullify or reverse our prayers. A little like those who were unsympathetic when Nehemiah decided to rebuild the walls of Jerusalem (see Nehemiah, chaps. 2—7). But we know how to handle such malpractice, just as Nehemiah did. Our Leader,Mary Baker Eddy, reminds us, “Never fear the mental malpractitioner, the mental assassin [of our Church], who, in attempting to rule mankind, tramples upon the divine Principle of metaphysics, for God is the only power” (Science and Health, p. 419).

God has a world-changing purpose for our Church. The founding of this denomination opens the door to a powerful, enabling force as human consciousness again wakens to healing through prayer. Nothing is going to thwart that purpose. There is a spiritual shield protecting this Church, and it can be demonstrated in the context of Christ Jesus’ words, “Upon this rock I will build my church; and the gates of hell shall not prevail against it” (Matthew 16:18). This “rock” of Christ, Truth, describes how solid our purpose is as “a Church of healers.” Our Church Founder draws on the Master’s example: “Jesus established his church and maintained his mission on a spiritual foundation of Christ-healing” (Science and Health, p. 136).

Other denominations may ask each of their members to “go out and get”—that is, convert someone so that their congregation will become larger. The request of this Church would be closer to “go out and give”—that is, heal someone in need of the Christ. Nothing will grow the foundational roots of our Church the way healing will.

I know a fellow who overcame some shyness and began to feel more open to healing others. Opportunities opened up more than once in his travels. On an international flight one time, when a medical emergency arose, he reached out and put his hand on the man’s shoulder while praying. Gradually the symptoms (of what some may have feared was a heart attack) began to subside until there was reasonable normalcy again.

Are you up to such an offer of helping others in need? Of the seven billion people on this planet, you are one of only a relative handful of individuals who know enough about the Comforter, promised by Jesus, to pray scientifically. In thinking about how you might contribute to strengthening our movement, maybe private praying, inspired writing, public healing, will be some of the steps you take. Or maybe you will have other ideas. But do be willing, in your own individual way, to be a blessing to our membership.

A new member of The Mother Church wrote to me as Clerk and said, “OK, I’m a member. So what do I do now?”

I guess this Journal article might be thought of as a written response to your question. I’m not counting you as just an additional member. I’m counting on you as a vital healer. So let’s go to work! 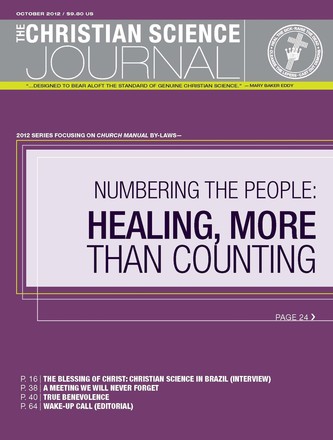 Is Christian Science supposed to be completely different from other churches and beliefs?

Do children need to make Christian Science their "own?"

Can you explain if "lower powers" are real?

How do you know if you are ready for Primary class instruction?

Hope at a halfway house

From the Christian Science Board of Directors | October 2012

Message from the Clerk of The Mother Church

A Full-Text Quarterly designed to bring the word into focus

The blessing of Christ: Christian Science in Brazil

Healing, more than counting, the people

'Clearer than the noonday'

Beyond debate and dialogue