The Bible records humanity's search for its divine source, the creator of the universe. All people are affected by the Bible's message, whether or not they are actively seeking God. A bird flies high or low but never gets away from the air. In much the same way, every conscious being is influenced, at least to some extent, by divine, infinite Spirit, which the Bible reveals as always present. Like the air around the bird, the presence of Spirit, or God, touches everyone, everywhere.

The Bible has often been referred to as God's revealed Word, or Logos. The revealed Word starts with an affirmation, in essence, that God is All and has created everything entirely good out of His own perfect being. The Biblical record moves on through valleys of darkened thought and mountains of inspired vision up to the teaching and example of Christ Jesus, and on through his earthshaking resurrection and to his matter-dissolving ascension. It shows the present, practical possibilities of Scriptural teachings for each of us. The Bible record draws to a conclusion with St. John's vision of "a new heaven and a new earth." Again, like the ever-present air, the inspiration of the Bible is for everyone, everywhere.

The inspiration of the Bible is for everyone, everywhere.

The Bible inspired me when I let it speak to me in its own terms and when I let myself respond to it. For example, the ninety-first Psalm begins, "He that dwelleth in the secret place of the most High shall abide under the shadow of the Almighty." When I read that, I asked myself, "What is the secret place of the most High"? And I thought, "It's the presence of God—the quiet consciousness of divine Love's ever-available care." Then I asked myself, "Why is it secret and what is it secret from?" And I thought: "It's secret because it's unknown to negative material thinking. It's a safe harbor that's visible to good and invisible to the opposite of good." Then I'd continue with the whole psalm almost as if I were having a conversation with it. I've seen the practicality of that dialogue in the presence of bullets and bombs, anger and fear.

While traveling in a country going through political unrest, I would sometimes find that just before or after I was at a particular spot, a bomb would go off. And not only was I safe but no one else was harmed during those incidents. Again, "the secret place of the most High" was a very happy place to be!

This Science is as old as the Word itself and as new as the present expression of that Word. It's as universal as divine Love and as individual as Love's specific, personal care. Science and Health reveals the Science of Christianity and the means for experiencing its results in daily life. The textbook is inseparable from the Bible because it's inseparable from the revealed Word. It's complementary to the Bible because it helps its readers understand the revealed Word and explains how to live that Word in practical terms.

Christian Science is basic Christianity. It corrects, improves, and heals the human scene in an identifiable way. It lays great stress on healing.

Its purpose in healing, however, is not only to destroy suffering but to prove the divine Principle of existence. It's to prove the truth of perfect God and of His perfect child, made in His spiritual likeness. Without proof, this truth might be passed by as theory rather than as Science, or divine law. Jesus indicated the importance of proof, of healing works, as confirmation of his divine source: "If I do not the works of my Father, believe me not. But if I do, though ye believe not me, believe the works: that ye may know, and believe, that the Father is in me, and I in him." John 10:37, 38. Yet his teachings also indicate that healing isn't an end in itself, but is the "bugle-call" to salvation. See Mary Baker Eddy, Rudimental Divine Science, p. 2.

I have been cared for by many physical healings in my own life. But more important, those healings have played a major role in forcing me to look at and elevate my own character. We often wait for circumstances to push us into needed introspection. Paul said, "Examine yourselves, whether ye be in the faith." II Cor. 13:5. Renovation of character speeds our journey on the road of spiritual progress. A balloon rises as the ballast, or weights, that hold it down are dropped off. It's easy to accumulate ballast unnoticed in the daily round of life. And one way to drop that weight is to turn humbly again and again to the spiritual and moral teachings of the Scriptures.

Mrs. Eddy was a deep student of the Bible. Christian morality rooted in Jesus' Sermon on the Mount permeates her teaching. Referring to the Science of Christianity, she writes, "The Sermon on the Mount is the essence of this Science, and the eternal life, not the death of Jesus, is its outcome." Science and Health, p. 271. Although she immersed herself in Bible research for three years before writing Science and Health, the Bible was her constant companion, her teacher and guide. It was a continuous source book in her home. So she naturally turned to the Scriptures in a search for the method behind the works of Jesus and his disciples. Her book is replete with direct quotations from the Bible and allusions to it.

These two great books, the Bible and Science and Health, have been the cornerstone of my own life. I've found the daily study of these two books to be like two parts of one song sung together. One time while serving as a marine in Korea, I was tracking and guiding an airplane down through the mountains in very bad weather. The pilot was unable to determine where the mountains were and how to get through them. His fuel supply was limited, and he needed to be brought down as quickly as possible. As I was guiding him, his plane disappeared from my radar scope. All efforts to reestablish connection failed, and time was of the essence. I turned instinctively to the Bible for aid, and these verses from the book of Romans came to mind: "For I am persuaded, that neither death, nor life, nor angels, nor principalities, nor powers, nor things present, nor things to come, nor height, nor depth, nor any other creature, shall be able to separate us from the love of God, which is in Christ Jesus our Lord." Rom. 8:38, 39. Then, immediately joined with that, I thought of two sentences from Science and Health: "Spiritual vision is not subordinate to geometric altitudes. Whatever is governed by God, is never for an instant deprived of the light and might of intelligence and Life." Science and Health, p. 215.

I sensed instantly that God wasn't controlling electronics, but that the divine Principle, God Himself, was in control of every facet of His own creation. That God's Christ, the care of divine Love, was always present. Christ was right there in a practical, tangible way to take care of this specific need. I sensed that this tender Christ held everyone in his or her right relation to God and that no one could be separated from the intelligent guidance needed for safety and direction. I was now fully persuaded that no one could be separated from the mothering care of divine Love.

Mary Baker Eddy was a deep student of the Bible.

Contact with the pilot was reestablished, the needed directions were given, the pilot gave a relieved "Thank you," and I gave a silent "Thank you, dear God, for Your tender care."

The Bible speaks to every need of humankind. And Science and Health joins with it, showing the practicality of Jesus' teachings now. The Christian unity of these two books is described by Mrs. Eddy: "The Bible was my textbook. It answered my questions as to how I was healed; but the Scriptures had to me a new meaning, a new tongue. Their spiritual signification appeared; and I apprehended for the first time, in their spiritual meaning, Jesus' teaching and demonstration, and the Principle and rule of spiritual Science and metaphysical healing,—in a word, Christian Science." Retrospection and Introspection, p. 25. 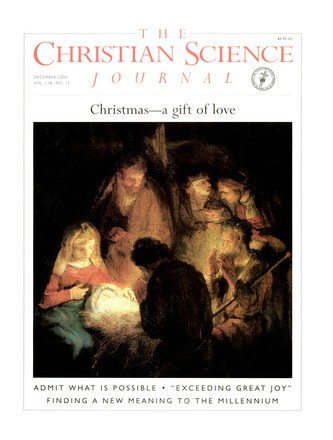