Carrying anger, hostility, and resentment around is like carrying a heavy object. It makes us feel tired and strained, and it becomes heavier the longer we carry it! But we have a choice. We can put it down, and practice true forgiveness and heartfelt love.

To forgive, one dictionary tells us, means "to cease to feel resentment against on account of wrong committed." Resentment and reaction stem from the "self" family—self-will, self-love, self-justification, self-righteousness, self-pity. And they bring a whirlpool of anger, confusion, frustration, "dis-ease." How important, then, to deal with unforgiveness when it appears as just a wriggling, slithering snake, rather than when it has grown into an all-consuming, fiery-tongued serpent!

The theme song of Christ Jesus' teachings is unconditional love.

The theme song of Christ Jesus' teachings is love—unconditional, forgiving, unselfed love. Love is the anchor word of what Jesus said were the two great commandments: to love God with all our heart, soul, and mind, and to love our neighbor as ourselves. See Matt. 22:35–40 . So many of his teachings bring out the need for forgiveness, and the very last thing he said on the cross was, "Father, forgive them; for they know not what they do." Luke 23:34.

Forgiveness is one of the qualities that Jesus clearly linked to healing and regeneration. He said: "What things soever ye desire, when ye pray, believe that ye receive them, and ye shall have them. And when ye stand praying, forgive, if ye have aught against any: that your Father also which is in heaven may forgive you your trespasses. But if ye do not forgive, neither will your Father which is in heaven forgive your trespasses." Mark 11:24–26.

Perhaps one of the most demanding lines in the prayer that Jesus left for his followers is, "And forgive us our debts, as we forgive our debtors." Matt. 6:12. This line does not say, "Forgive me my debts and I'll try to forgive others." Nor does it say, "Well, I'll forgive in general, but there may be the odd exception." This is a demand to totally forgive anyone who has hurt us or caused us resentment—unconditionally. And it makes our own forgiveness dependent on our forgiveness of others. Setting those free whom we feel we cannot forgive sets us free to feel the love of God. To forgive is to set a prisoner free—and to discover that the prisoner is ourselves.

Forgiveness may involve apparently small incidents. But it may also extend to an almost inconsolable sorrow over the needless loss of a loved one, whether it's the result of conflict in another part of the world or of senseless killings in our own communities. How does one forgive under such circumstances?

Here is a moving example of a man's courageous, life-changing choice to forgive. He was called "Wild Bill" Cody, and the following excerpts are from a book by George G. Ritchie:

"He was one of the inmates of the concentration camp, but obviously he hadn't been there long: his posture was erect, his eyes bright, his energy indefatigable. Since he was fluent in English, French, German and Russian, as well as Polish, he became a kind of unofficial camp translator.

"We came to him with all sorts of problems. ... But though Wild Bill worked fifteen and sixteen hours a day, he showed no signs of weariness. While the rest of us were drooping with fatigue, he seemed to gain strength. ... His compassion for his fellow-prisoners glowed on his face, and it was to this glow that I came when my own spirits were low.

"So I was astonished to learn ... that he had been in Wuppertal since 1939! For six years he had lived on the same starvation diet, slept in the same airless and disease-ridden barracks as everyone else, but without the least physical or mental deterioration.

"Perhaps even more amazing, every group in the camp looked on him as a friend. He was the one to whom quarrels between inmates were brought for arbitration. ...

"'It's not easy for some of them to forgive,' I commented to him one day. ... 'So many of them have lost members of their families.'

The way to forgive is to yield to the healing influence of God.

"Wild Bill leaned back in the upright chair and sipped at his drink. 'We lived in the Jewish section of Warsaw,' he began slowly, the first words I had heard him speak about himself, 'my wife, our two daughters, and our three little boys. When the Germans reached our street they lined everyone against a wall and opened up with machine guns. I begged to be allowed to die with my family, but because I spoke German they put me in a work group.'

... " 'I had to decide right then,' he continued, 'whether to let myself hate the soldiers who had done this. It was an easy decision, really. I was a lawyer. In my practice I had seen too often what hate could do to people's minds and bodies. Hate had just killed the six people who mattered most to me in the world. I decided then that I would spend the rest of my life—whether it was a few days or many years—loving every person I came in contact with.'

"Loving every person ... this was the power that had kept a man well in the face of every privation." George G. Ritchie, Elizabeth Sherrill, Return from Tomorrow (Waco, Texas: Chosen Books, 1978) .

This is a choice that each one can make today, however difficult the circumstances.

So how do we forgive? How do we cease to feel that nagging resentment when we feel we have been wronged? This may seem an almost impossible task, so imbued is the human mind with self-justification and self-righteousness. But the way to forgive is to yield to the healing influence of God. It's to allow our thought to be so filled with Truth and Love that nothing harmfully critical or resentful can enter. It is daily and hourly breathing a blanket of love over all within the circle of our thought. Forgiveness doesn't disregard wrongdoing, but loves through a higher concept of true identity as God's likeness, regardless of how ungodlike people appear to be at times.

In a remarkable article called "Love your Enemies," Mary Baker Eddy writes: "We must love our enemies in all the manifestations wherein and whereby we love our friends; must even try not to expose their faults, but to do them good whenever opportunity occurs. To mete out human justice to those who persecute and despitefully use one, is not leaving all retribution to God and returning blessing for cursing." And she says further along, "If you have been badly wronged, forgive and forget: God will recompense this wrong, and punish, more severely than you could, him who has striven to injure you." Miscellaneous Writings, pp. 11, 12.

A very important part of forgiving is to forget that there was ever any need to forgive. There is a timeless proverb, "Bury the hatchet, but don't mark the spot where you buried it!" Forgiving heals the wound; forgetting heals the scar. But again, true forgiveness is not glossing over evil or pushing it under the carpet; it is seeing right beyond the evil to everyone's real, God-created nature.

The Psalmist said, "Bless the Lord, O my soul, ... who forgiveth all thine iniquities; who healeth all thy diseases." Ps. 103:2, 3. As we begin to realize that God is a loving, forgiving God, we begin to see the basis of true forgiveness: man, the image of God, has to express the loving, merciful nature of his creator.

So to wipe out the memory of that deep hurt or seemingly irreparable damage caused by another, we need to see that person more as God is seeing him. We're helped in this work by praying to be delivered from falsely judging others; praying to let go of self-justification, self-righteousness, self-will, self-pity, and to see that we and the one we are having such difficulty forgiving have the same Mind, the same Father. Therefore we are actually brothers, part of the same loving family, equally loved and cherished. The error manifested by another can be washed away through the expression of tender Love. In Science and Health with Key to the Scriptures, the enlightening, spiritual interpretation of the verse from the Lord's Prayer "And forgive us our debts, as we forgive our debtors" is "And Love is reflected in love." Science and Health, p. 17.

Divine Love, God, never changes. It always remains unconditional, universal. Because God, Love, fills all space, He knows nothing outside Himself to forgive—like the sun that only knows sunlight, its own presence. However real a dark corner may appear to be, when the sun shines there, the darkness disappears.

Science and Health states, "Love, redolent with unselfishness, bathes all in beauty and light." Ibid., p. 516. Redolent means sweet-smelling. There is an old saying, "Forgiveness is the perfume a flower sends back to the heel that has crushed it." A lily cannot help giving off its perfume to all who pass by it, whether they appear to be good or evil. So, as the image of divine Love, we all naturally express love toward all. Love has never known or seen anything but its own gentle presence; therefore evil has no history in Love, and in truth, we have no memory or remembrance of anything but Love and its expression. Love is unconditioned by circumstances. Like the sun, it shines equally on all.

Today, let's rejoice that as the image of Love, we have no option but to drop the burdens of anger, resentment, and hostility; they are no part of our true, Godlike being. We reflect only the loving, forgiving heart of Love, which sees all in the sunlight of its own perfect being. 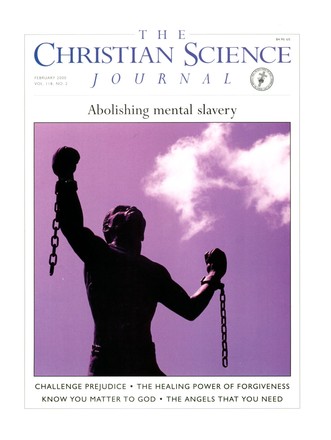 "When you pray, move your feet"

The active stillness of prayer

Spirituality in the workplace

A warrior of peace and love?

The angels that you need

"Can there any good thing come out of Nazareth?"

The Christian Science Monitor: ITS PLACE IN MY LIFE

"Can you make a living as a practitioner?"

The Christ is "the answer to their need"

Only Love to Meet