There are always some affirmative, upbeat things to notice. It is never total night. No matter how depressing current events may seem—local, international, or even domestic—we can always find some flickerings of light if we watch for them. We don't have to bog down in a trough of negativism.

The presence of good in human affairs is not something that happens by mere accident, in a universe of chance. It is an evidence that God is Love. And the love of Love, of Truth, is expressed through the Christ. The Christ is as universal as God, as eternal as divine Life. "Christ," Mary Baker Eddy says, "is the true idea voicing good, the divine message from God to men speaking to the human consciousness." Science and Health, p. 332.That message of truth is infallible and demonstrable. We manifest it in Christianity that loves and heals.

The Christ includes all truth — of health, of movement, of intelligence, of substance. God is what impels the good in whatever we see and do; and, by implication, leads us to uncover what is not good and correct it. The understanding of the Christ, then, is the base on which our ability to demonstrate Christian Science rotates.

Even where there seem to be only mortal mind's messages, themes, designs, and actions, there is the Christ. Our affirmations of this fact, and denials of the contrary evidence, are the substance of scientific prayer. The Christ, understood and given reign in our own life, makes prayer potent. The Christ represents, carries with it, the all power of Love.

It can turn a peace breaker into a peacemaker, bring a new turn to negotiations threatened with collapse. The power of the Christ is restricted to neither time nor place. "Christ, as the true spiritual idea, is the ideal of God now and forever, here and everywhere," Ibid., p. 361. our Leader, Mrs. Eddy, writes reassuringly.

The Christ can be seen to be active even in the most unlikely quarters. Whatever evidences genuine good, whatever leads to the advancement of the charitable, whatever reinforces good will, whatever assertions are made of the love of God — all these evidence the presence of the Christ. Religious clashes and hatred can be tempered by the Christ, healed by its universality. The Christ doesn't belong to just one group or nation. It is truly supranational — though we would be naive to think that this will be perceived and widely demonstrated overnight. The claims of animal magnetism, or the anti Christ, first need much clearer identification and much more consistent nullification.

"Anti Christ" is a term for a supposition, not a term for an actual antigood force. Its impotence needs to be demonstrated in solid Christianity, not just verbalized. Wrong thinking, whether it seems to come through individuals or nations, can prod a reaction only from materiality. Spirituality is unresponsive to evil. Christ Jesus said, "The prince of this world cometh, and hath nothing in me."John 14:30.

The Christ reveals the reality of all things. Animal magnetism would conceal the reality of all things. It would distract us from the evidence of Christ's universality. It would attract us to the viewpoints of mortal mind and dampen — even eliminate — our Christianity. It would induce skepticism about the power of good, would persuade us to doubt the legitimacy of the divine law, would generate resistance to the purposes of divine Mind.

But mortal mind is at most a pretended talker; it is not a doer. The Christ truly speaks and does.

The life, standpoint, and works of the Founder of Christianity point to the universality and irresistible dynamism of the Christ, Truth. He proclaimed this universality: "Neither shall they say, Lo here! or, lo there! for, behold, the kingdom of God is within you." Luke 17:21.

It is the dynamism of the Christ that impels people today to reach out for a better sense of man. Because of the Christ at work, human thought is not left contented with its beliefs and misconceptions. It will not be left forever with its puzzlement and dilemmas. Many people are realizing that the merely physical sense of man is unsatisfactory and unsatisfying. What is man? they ask. It is Christ, Truth, that prompts the question asking. And Truth that reveals the answers in the Science of Christ.

As we admit the universality of the Christ we won't be too surprised at some surprising workings of the Christ in human affairs! The Christ is infinitely versatile in its operations and can be seen and demonstrated at any time in any place.

Mrs. Eddy observes, "Throughout all generations both before and after the Christian era, the Christ, as the spiritual idea, — the reflection of God, — has come with some measure of power and grace to all prepared to receive Christ, Truth."Science and Health, p. 333. To the extent we ourselves are prepared to live and love the Christ, we will see its dynamism more evident everywhere. The Christ is the very activity of the love of Love and is irresistible. 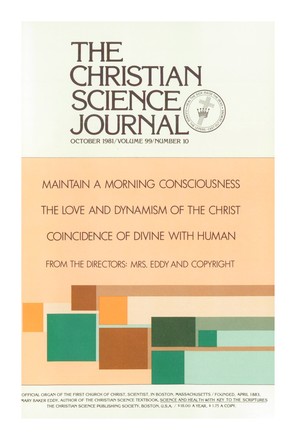 Woman-Eve or immortal daughter of God?

The love and dynamism of the Christ

No self-doubt in healing

Getting beyond Marah: healing bitterness

For I know the thoughts

Are we ready for the lecture?

I waited patiently for the Lord...

Love in our churches

For man, no need to get