When I first began studying Christian Science, one of the most life-changing concepts I encountered was that fear is based on the false assumption that we are separate from God and, therefore, vulnerable. It’s something I’m still learning today: that because of my oneness with God, I can experience only what is real to Him—Life, Truth, Love, and all things good. God’s reality is my reality; they are one and the same.

I love to read testimonies about “first healings” through reliance on Christian Science. Some seem quite remarkable—as if God wants to make a clear point that He exists and answers prayers. I think that was the case the first time I relied on God for healing. Although at the time I had little understanding of the laws of metaphysics, I did have faith in God, and my desire to follow His direction was sincere.

I had visited a dentist to have a broken tooth repaired, but he recommended extraction. My first and overwhelming reaction was fear—I understood that Christian Scientists turned to prayer rather than medicine to handle physical challenges, and I assumed this would preclude the use of anesthesia. (It wasn’t until later that I learned that Christian Scientists sometimes do choose to use anesthesia for dental procedures.) I dreaded the thought of having the tooth pulled! (I had never been a particularly hardy dental patient; once I fainted in a dentist’s chair before he even started the procedure, and had to lie down in a back room until I was calm.)

I asked the dentist if there was an alternative to extraction, and he said he could replace the tooth with a crown even though it wouldn’t last as long. To my way of thinking at the time, any procedure was preferable to an extraction, so I asked him to do the alternative but also asked for a week to pray about the situation. He agreed.

That week I diligently studied the Christian Science Bible Lesson and attempted to “pray without ceasing” (I Thessalonians 5:17). I remember focusing on “the scientific statement of being” from page 468 of Science and Health with Key to the Scriptures by Mary Baker Eddy—the words “there is no … substance … in matter” helped me overcome the fear and see that my identity wasn’t contained in a physical body. I spoke often with the woman who’d introduced me to Christian Science, and she supported my prayers with prayers of her own.

Mary Baker Eddy’s words from Retrospection and Introspection were also calming: “St. Paul said to the Athenians, ‘For in Him we live, and move, and have our being.’ This statement is in substance identical with my own: ‘There is no life, truth, substance, nor intelligence in matter’ ” (p. 93). I was beginning to understand that since my being is in God, not in a separate material body, I can experience only Godlike qualities, not pain. Additionally, only to mortal belief is a tooth more sensitive to one procedure than another, for matter is matter, and I am wholly spiritual.

I was still fearful the next week as I drove to the appointment, but I was also determined at least to try to remain true to this new sense of myself as spiritual. Then, suddenly, my hands quit shaking and all the butterflies and fear left me; I was completely calm. The dentist performed the needed root canal without anesthesia, and put the crown on my tooth. I felt no pain whatsoever. Later I learned that my friend had started praying for me, and at that moment my fear had left. I was so grateful and a bit amazed at this demonstration that there was, indeed, no sensation in matter.

A few years later the crown fell off, as predicted, and the tooth needed to be pulled. By now I had experienced many “proofs of God’s care” (Science and Health, p. 66) and the procedure didn’t frighten me. The dentist pulled the tooth with no anesthesia, and I felt no discomfort during or after the extraction. My understanding of my relationship to God had deepened, and I’d gone from being frightened at the thought of a dental procedure to being totally unaffected when the work was eventually done. Later, I understood this progression of thought better by delving into the metaphysics supporting it.

When I was new to Christian Science, my prayer was often: “Lord, I believe; help thou mine unbelief” (Mark 9:24)—since even though I knew what I was learning to be true, putting it into practice wasn’t always easy. Despite that, it seems God’s answer to my prayer was: “Blessed are they that have not seen, and yet have believed” (John 20:29), and “Blessed are the pure in heart: for they shall see God” (Matthew 5:8). With study, practice, and prayer,
I was blessed and learned to be less fearful and to trust God more.

In Genesis 1:27 we read, “So God created man in his own image, in the image of God created he him; male and female created he them.” This passage does not mean that God has a human form, but just the opposite: that we are created in God’s image, comprised wholly of spiritual qualities such as love, life, and honesty. Jesus’ mission was to help humanity understand that we express those qualities, too. Prior to his ascension he prayed: “Neither pray I for these alone, but for them also which shall believe on me through their word; that they all may be one; as thou, Father, art in me, and I in thee, that they also may be one in us” (John 17:20, 21). Mrs. Eddy explains this unity further: “As a drop of water is one with the ocean, a ray of light one with the sun, even so God and man, Father and son, are one in being” (Science and Health, p. 361).

The more firmly we claim our oneness with God, the more peace and harmony will be manifested in all aspects of our lives. Since fear (of pain, lack, death, and so on) is not a godly quality, it has no foundation in Truth and can be denied.

Understanding and demonstrating this oneness is an ever-unfolding process with trials and proofs along the way, but as Mrs. Eddy says: “These proofs consist solely in the destruction of sin, sickness, and death by the power of Spirit, as Jesus destroyed them. This is an element of progress, and progress is the law of God, whose law demands of us only what we can certainly fulfil” (Science and Health, p. 233). I learned early on in my study of Christian Science that God knows our needs, and helps us feel secure in turning only to Him for healing and comfort. We don’t learn it all at once, yet we find, as we continue to “work out [our] own salvation” (Science and Health, p. 443), that it becomes easier to trust in God’s omnipotence for healing and guidance.

As we strive to correct erroneous beliefs and replace them with Truth, our trials give us the proof we need to move from faith to understanding—to the demonstration that we reside in Spirit, not matter, and that we are safe and whole. 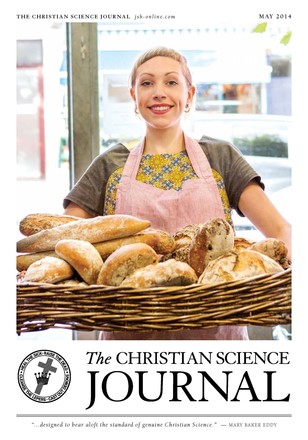 Appealing to a higher law

Mary Baker Eddy and her lecturers

Paul Stob interviewed by the Journal’s Rosalie E. Dunbar | May 2014

From faith to understanding

Why do we pray?

The value of fasting

Look toward the high goal

Twisted ankle was a dream

Back on the tennis court

By Liz Butterfield Wallingford | May 2014

By The Christian Science Board of Directors | May 2014