[Names and addresses of practitioners and patients noted below furnished on application to Mrs. E. Hopkins, 571 Columbus Ave., Boston.]

I was greatly amused by the relation of the experience of a Christian Scientist in connection with an M. D. A family of four were nearly asphyxiated by charcoal gas. Nobody knew what the trouble really was, but they were very ill. Two of them (equally sick with the other two) sent for an M. D., and two sent for a C. S. The M. D. treated for paralysis; the C. S. treated as instructed in mental science The C. S.'s patients rallied at once, and were as well as ever in a little while. The M. D.'s two grew worse and worse, and himself went home overcome with the gas, which had not escaped from the premises. Pretty good triumph for C. S. Reporter.

A lady was given up to die by her doctor. Her friends sent a telegram to a well known scientist telling him of her terrible sufferings. She recovered almost instantly, to the utter amazement of the physician, who said (not knowing of the treatment she had received in C. S.) that it was one of those wonderful cases he had heard of where medicine (?) really seemed to conquer death. E.

My little son was taken suddenly ill with tonsilitis. Throat swelled so that his tongue protruded and looked purple. He became delirious and was soon in high fever. All my friends advised an M.D., but I had known of too many cases lost by the "faculty" to trust my precious child to their guessing empiricism.

I took charge of the case myself, and before morning (he was taken at night) the fever had subsided, the pulse quieted, and he was on the way to restoration. During the day he asked for food and fruit, ate them, and went out to play. Have seen no symptom of tonsilitis since.

I have been much interested in reading the accounts of cases cured by Christian Science; but I have never yet seen one mentioned at all like mine in any respect, and I yield to an impulse to write about it and send to your columns, hoping some other sufferer may read it, and be thereby imbued with hope for himself.

I inherited from several generations back a family trait called "pride of birth." As I grew to womanhood, it developed into an ugly egotism, which fostered a sarcastic and critical attitude of mind toward others. These diseases became chronic, and their attendant physical conditions baffled the skill of the best medical faculty. Finally I became known to myself and others as a bad case of "nervous prostration."

I have heard many people say they object to Christian Science because through it they lose their personality. Never was I so rejoiced as when I learned that through science I could lose personality and its attendant selfishness, and in the place of it become a partaker of the divine nature in the image and likeness of God. Now I am in perfect health physically; but that is of far less importance than that I am a better woman in every other way; thereby proving the power of Christian Science to destroy sin as well as sickness. A Patient.

Miss L. B., of Boston, had been in hospital several times during the past year for treatment for white swelling on leg. Three prominent physicians had refused to perform an operation, insisting upon amputation. She wore plaster cast and walked with crutches, but left the hospital, preferring death to amputation. One treatment in Christian Science destroyed all pain, and she has walked on street every day since without crutch or cane; all swelling subsided and muscles relaxed in two weeks.

Mrs. A., cured in three treatments, of serious troubles which had rendered life a burden for fifteen years.

Mrs. T., an invalid from neuralgia, was cured in one treatment.

Mr. R., held a conversation on C. S., and has been free from rheumatism since.

Miss B., cured of spinal trouble and nervous prostration in two treatments,— would not take a third, declaring she could not be improved for she felt like a Hercules. MRS. F. E. S.

Dear Doctor (in Science),—I was entirely cured of chronic dysentery three days after writing you. It had been long standing. "M. D.'s" pronounced it incurable. At the time I wrote you, I was suffering intensely. I return you sincere thanks for my restoration, and trust more fully than ever in Christian Science.

Distance is no obstacle to cure by C.S. One of my cases was inflammatory rheumatism. Telegraphed from a thousand miles' distance of his sufferings. Healed him same day. L.

One of the Christian Scientists cured a case of lock-jaw within a few hours. He cures everything he attempts, as nearly as I can learn. J.

An interesting ease carried by the Scientist, Miss Ellen E. Cross, is that of humors caused by vaccination being entirely removed by absent treatments in C. S. The grateful patient writes: "I owe so much to Christian Science, and want every one to know about it,—that there is something in this world that will cure mortals afflicted like myself."

This new Science of healing is creating no little excitement, and wonderful things are predicted of it. Its operations are indeed almost miraculous. I have seen in my own family results which astonished me. My wife, who is a properly qualified physician of the homeopathic school, and has had a successful practice for twenty years, has become so thoroughly imbued with this new Science as to discard the use of drugs entirely, and her present results by the new method of treating disease are simply marvellous. J. A.

So wonderful is the healing power of Mrs. Eddy, the discoverer of C. S., that people are cured of life-long diseases by simply hearing her speak. To read a page of her writings has cured many a hopeless invalid, and even her printed name in the Journal of Christian Science lifts people from sick beds. So potent is the power of a mind consecrated wholly to the salvation of the world!

A paragraph in a current publication reads: "Christian Science is a late discovery, and like all other discoveries of principles unsuspected and unexpected, is running the gauntlet of contemptuous denunciation by the "old fogy" element of existing systems. History is black with records of the maltreatment of just such unwelcome innovations. This is the systematized knowledge of the Principle by which Jesus of Nazareth worked bodily cure, and effected moral reform. It solves the problem of man and the universe, and brings Truth that is Good down to the daily wants of humanity. It is at once therapeutics for body, and therapeutics for mind. Macbeth's bitter cry:

"Canst thou not minister to a mind diseas'd,
Raze out the written troubles of the brain'
Cleanse the stuff'd bosom of that perilous
stuff
Which weighs upon the heart?"

finds herein gladdening answer; for it points the way to peace of mind, and physical health for the most deeply afflicted,—as thousands are testifying. God speed the Cause! 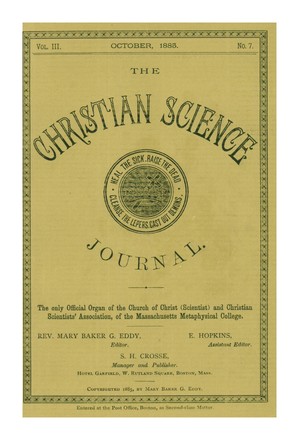 THE MIND THAT HEALS

By Sarah Doudney with contributions from The Huskers | October 1885

Nor can there be found a more rigorous...

Sickness is the fruit either of ignorance...

A WORD FOR MANY

"Who Forgiveth All Thine Iniquities."

Letters and Cases of Healing