Sometimes, what's familiar suddenly looks new. That's what happened to me one day when I was reading the chapter "Christian Science Practice" in Science and Health. I have read it many times, but this time I read it looking for the verbs, the action words. There were so many that I started writing them down, and before I had reached the end of the chapter, I had a six-page list. Here are just a few of the action-packed directions the author, Mary Baker Eddy, gives in that chapter for dealing with the symptoms of sickness: dispute, destroy, dismiss, disagree, rise in rebellion, banish, mentally contradict, be firm, be calm.

The next Sunday, I asked my Sunday School class to write down the action words from just a few pages in this same chapter. All of a sudden, one student yelled, "I get it! Fight! Fight! Fight!"

When trouble comes, it's so easy to lie down and let it steamroll right over you. But it's possible to develope the capacity to fight on the side of divine Truth, of God. Fighting this way doesn't imply an exhausting battle. One kind of fighting can be actively trusting and resting in God's love. Whatever action is called for, by your firmly siding with God, you raise your sights above the problem and begin to see God at work, right where it looked as though there was only trouble.

Science and Health explains Jesus' method of healing. And it's easy to see that its call to action is modeled on his. The Gospels repeatedly show Jesus rousing people to action as he healed them. Take these statements, for instance: "Rise, take up thy bed, and walk"; "Stretch forth thine hand"; "Damsel, I say unto thee, arise." John 5:8; Matt. 12:13; Mark 5:41.

You raise your sights above the problem and begin to see God at work.

A few years ago, I saw the value of fighting on God's side. I was at a church meeting, when the speaker, a friend of mine, suddenly collapsed. Sensing that something was wrong just before she fell, I was able to get to her and catch her before she hit the floor. Another friend came up, and we both began praying aloud "the scientific statement of being," which is on page 468 of Science and Health. It includes strong, unequivocal statements about the allness of God and our spiritual nature as God's likeness, which we spoke forcefully.

Our friend didn't look good at all, but we weren't afraid—actually, there was no time for fear. I encouraged her to say "the scientific statement of being" with us (I knew that she knew it by heart), and after a few minutes she started to, but softly. "Say it louder," I urged. The severity of the situation made it clear to me that all three of us needed to, in that Sunday School student's words, "Fight! Fight! Fight!"

Our friend responded to the truths I was reading, and literally rose to the occasion. She announced that she was going to get up and drive herself home. The doctor was very concerned, but my other friend and I assured him that we would take good care of her. He seemed satisfied at this point, and left. Then, 15 minutes after she had collapsed, she also left, walking out entirely on her own. We saw to it that she got home safely. And it was evident soon afterward that she was completely healed.

There was no time for fear.

Different occasions call for different responses, but the key in every case is to act. One of the reasons the Bible and Science and Health are so helpful is that they're guidebooks to action. They help us resist being passive in the face of problems, and show us how to fight, by whatever means, on God's side—the winning side. 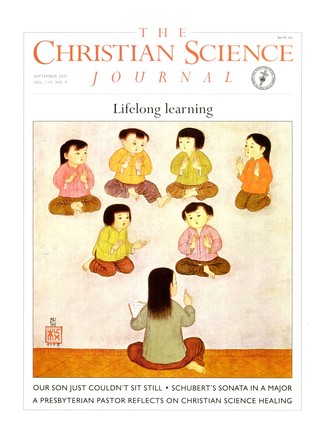 Getting a "leg up"

The bombs were duds

Healing and protection in wartime

Engaging with deep things of the universe

'Spirituality' and the need for structure

How I survived my first year of teaching

A teacher learns with the children

A gospel message takes to the streets

The end of chronic back pain

A toolbox for better grades

'I'm better and smarter than I give myself credit for'

Child healed in the night