Not long after the end of the Second World War, I tried to destroy my own life. My submission to so-called laws of heredity, inferiority complexes, circumstances connected with family disharmony, and war disturbances had caused deep depression and finally despair. And these elements seemed to temporarily overpower the tender seedlings of Christian Science that had just started to grow in my heart. But in my darkest hour of temptation there came to my consciousness, as a flash of light, a reminder that divine Life and its spiritual idea are infinite. This truth came with such power and clarity to me, that I found the strength to rise with hope for a new beginning. I no longer wished to die.

Because I had lost much blood from my suicide attempt and was very weak, concerned relatives took me to a hospital. After a short time my arm became infected by blood poisoning. During the night I lost consciousness, and the surgeons decided to amputate the arm. When I regained consciousness for a short time, I found myself on the operating table with the surgeons around me. The thought came to me very strongly that God had helped me to stay alive and He would not forsake me now. The doctors suddenly changed their plans and decided not to amputate. The nurse later told me that in my case God had really worked a wonder.

During the next weeks in the hospital a stillness grew within me, and my confidence returned. Each day before dawn I studied the Lesson-Sermon in the Christian Science Quarterly, using the Bible and Science and Health by Mrs. Eddy. There was a lot of time to think of God and my relationship to Him. I took no medicine (the pills given to me I destroyed), and the wounds were only cleansed. Slowly I regained strength so that I could get up and walk around.

One wound on my wrist did not seem to heal. I had been in the hospital for nearly three months and longed so much to go home. Because I had learned in Christian Science that true healing takes place in consciousness, I felt that something in my thought still needed to be healed. A friend, who was a Scientist, came to visit one day, and I told him about this. He urged me to really acknowledge God's supreme goodness, right then and there and everywhere. He quoted Psalm 46 (v. 10), "Be still, and know that I am God," and encouraged me to be active in letting my light shine, to express my true selfhood as God's child. He pointed out that there were many people in the beds around me who were longing for friendliness and love.

I accepted this advice with eagerness, and from that minute on I rejoiced in God's ever-present goodness and labored to express His love to all. There were many small kindnesses to perform, such as caring for the flowers and getting a glass of water for someone. Suddenly my hours were filled with service of love and my heart with deep happiness. I was no longer concentrating on a mortal self. Before a week had passed, the remaining wound had closed, and I could go home.

I am telling about these incidents that happened over thirty years ago because I wish so much to help someone who seems in a dark valley gain new confidence and hope. God's help is so near! Through spiritual understanding we must subordinate our human lives to the divine Life. Then wonderful blessings can be ours.

From childhood I longed to help my fellowmen. An understanding of this Science gave me many opportunities to do this. After years of spiritual growth, I left my small town for a part of the world where I could take active part in church work. My desire to learn English to better understand Christian Science literature took me to England.

There I helped a Hindu gentleman (who later became my husband) to become acquainted with this Science. A prominent physician had just told him that it was uncertain whether he could survive a needed heart operation. Through faithful study and practice of this newfound religion, he was healed of heart disease. We had a very happy and fulfilling marriage. When we had to undergo medical examinations in order to obtain a visa to go to the United States, my husband's medical report read: "No defect, disease, or disability." Only a few years before this a life insurance company had refused to insure him because the medical diagnosis was so discouraging.

"Thanks be unto God for his unspeakable gift"! (II Cor. 9:15.) I am very grateful for the enrichment my training and work as a Christian Science nurse has brought me. It has thoroughly grounded me on the rock, Christ, as well as provided opportunities to witness outstanding healings in Christian Science and meet faithful workers in our Father's vineyard. A broader understanding of the father-motherhood of God has opened the way for increased usefulness, lasting friendships, a wider understanding of our tasks for the world, and greater satisfaction. 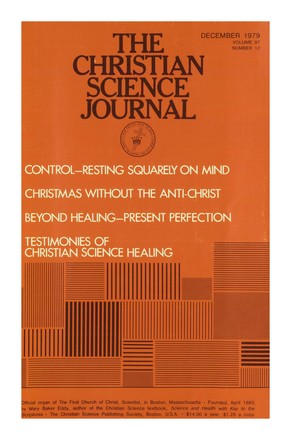 The continuity of being

The myth of mortal mind

Christmas without the anti-Christ

The star and the scepter

Behold, I send an Angel before thee,...