A friend once asked me what my favorite thing is that Christian Science teaches. I have many favorites, but one of the things I am most inspired by and grateful for is the idea that “God has endowed man with inalienable rights, among which are self-government, reason, and conscience” (Mary Baker Eddy, Science and Health with Key to the Scriptures, p. 106). The idea of self-government being a divine right can lift us out of all kinds of limitation, or anything that is not in alignment with the law of God, good. It benefits all aspects of our experience—our health, relationships, even finances.

This divine right is based on God as infinite and all-powerful, as well as totally good. It is not a license to do whatever we want. The expression of proper self-government under God’s supreme rule blesses others as well as ourselves. Following the quote above, Science and Health says, “Man is properly self-governed only when he is guided rightly and governed by his Maker. . . .”

For instance, the patriarch Abraham shifted the course of history when, motivated by a desire to glorify God, he left his family’s worship of idols to lay the foundation for a nation founded on monotheism. He showed that understanding God as governing all makes it natural to express the freedom of self-government guided by God. Not only was Abraham blessed, but those trusting in God’s all-power over many centuries have similarly been benefited as well.

This presiding sense of self-government under the reign of God, divine Mind, allows us to feel at peace, or regain it. For instance, when a family member imposes an unhelpful opinion, or when we disagree with the governance and direction of politics, spiritual self-government frees us from being controlled, manipulated, or intimidated. Instead of fearing what others might think, we are enabled through our conscious self-government to let go of resentment or imprisonment.

To exercise proper self-government, it helps to be clear about our inherent relationship to God. On biblical authority, Christian Science teaches that we are in reality spiritual, not material, the image and likeness of God. We are at one with the only, all-governing divine Principle. Mrs. Eddy describes this oneness in the following way: “As a drop of water is one with the ocean, a ray of light one with the sun, even so God and man, Father and son, are one in being” (Science and Health, p. 361). In this oneness, there is nowhere we can go outside of infinite Love. Understanding this gives us the ability to overcome the false sense of a selfhood apart from God, which is often not peaceful at all.

Self-government is not about willfully trying to control this mortal “self” apart from God, but about increasingly recognizing its unreality. We exercise proper self-government on the basis of the fact that we have a spiritual selfhood that truly reflects God. When this is seen, it’s natural to let go of impositions on our thinking or suggestions that aren’t aligned with God, such as unloving impulses and reaction. We’re also empowered to break free from mere people-pleasing, intimidation, and personal domination.

As a child, I danced a lot. I had some lovely teachers, but in one class, the teacher made comments that felt verbally abusive. All week long, I felt on edge and stressed, and would dread the thought of going to this class. But it felt impossible to leave. Afraid of what others and my teacher would think of me if I quit the class, I continued to endure it.

Around this time I started praying with a Christian Science practitioner about unrelated matters. I learned that as God’s loved idea or child, I couldn’t be controlled by another mortal or even feel afraid of being controlled. My decisions and actions could actually be directed by God and God alone. All I needed to do was be obedient to God’s guidance and recognize divine Love’s supreme government.

While following through with commitments is generally a good thing, in this instance I felt led by God to continue in the class only until the recital and then to not return. The teacher was visibly upset by my decision. But for the first time I can remember, others’ opinions didn’t control me, because I knew I was relying fully on God for direction.

We each have the ability and right to make decisions and act based solely on God’s direction.

I felt the rightness of the action I had taken was verified when I later read the following in Science and Health: “Never breathe an immoral atmosphere, unless in the attempt to purify it” (p. 452). This holy counsel gives us the ability and courage to stand up for what’s right, to be treated as God’s child should be treated, and to know God’s will is done, not someone else’s will.

This lesson about my ability to allow God to govern my experience has set the groundwork for my life ever since. When bigger decisions have come up, I continue to reap the freeing benefits of this cherished lesson. It shows how we can be governed by God alone, and there is immense freedom in the knowledge and prayerful application of this spiritual law, whether the situation is a little annoyance or more dire and urgent. God’s government and understanding our reflection of that bring healing.

For instance, as I had to learn in the dance class, if fear seems to be revoking our power to make our own decisions, the remedy is to know that all fear, including the fear of being controlled, is a mental imposition. Such fear is exterminated by recognizing God’s all-power, and when the fear of others controlling us is eliminated in this way, our experience begins to change. We see that everything is under God’s control, and reap the benefits of knowing that.

Because God is all-powerful and ever present, we each have the ability and right to make decisions and act based solely on God’s direction. When we learn that it’s natural for each of us to express proper self-government under God’s supreme rule, we are out of reach of any mesmeric pull. We aren’t swayed by personal influence or anything else attempting to act as a god in our thinking. We are free to go to God for all guidance and direction.

These timeless words from Science and Health encapsulate the natural fruitage of understanding what truly governs us: “Citizens of the world, accept the ‘glorious liberty of the children of God,’ and be free! This is your divine right” (p. 227). 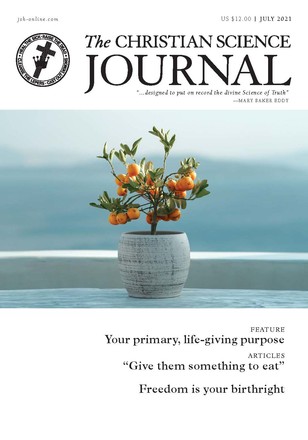 Praying with and for the military

“Give them something to eat”

A deeper trust in God

Freedom is your birthright

“Stand porter” and reject the impostor

Self-government is an inalienable right

By Helen Stevermer with contributions from Julia Stevermer | July 2021

Healing of a collapsed lung

My prayers about parenting

Moving house, but staying in the kingdom of God

Live in the sunlight of Truth