In the early 1950's, Bette Graham was a secretary in search of a solution: a better way to correct typing mistakes. Her invention, Liquid Paper Correction Fluid, created a whole new industry. After watching her company grow from a kitchen stove operation to an international corporation with several hundred employees, Mrs. Graham stepped down as chairman of the board and entered the public practice of Christian Science healing.

As a friend told the Dallas press when Bette Graham recently received their award as one of the top women news-shapers: "I don't think you can separate her from Christian Science. Her inspiration, her convictions—everything she does—come from her religious beliefs. "

When people walk through Liquid Paper's manufacturing plant today and watch thousands of bottles being filled with correction fluid, it must be hard for them to imagine this all started in a kitchen. How did the company come into being, and how do you explain its rapid growth?

It was the result of working out a problem of chronic lack in a spiritual way— through radical, spiritual means. I have had the hardest time getting others to understand that the company's success was not because of an unusual ability on my part, but because of the direct effect of this clear recognition that Spirit is substance—a recognition available to everyone.

When Christian Scientists deal with physical problems they learn that true substance is spiritual, not material. The same is true in matters of supply. That was my standpoint. What I accomplished was not through human will but through a recognition of the presence of the Christ and of true substance. I had a deep desire to build this company by underpinning it with spiritual concepts. In those early days that meant day by day refuting the suggestion that money was substance instead of Spirit.

If one's basis is divine Truth, if one conceives a project as an expression of spiritual ideas, that project must move forward. There are pitfalls in trying to build a company on the basis of material concepts, because the spiritual dimension, which is actually the only dimension, is where the real substance is. Christian Science teaches us how to look beyond material products and production lines, and deal with fundamental spiritual elements.

Do you think business can be more than financial reward for the producers, and products or services for the consumer?

From the company's beginning, there has been a long-range plan to elevate our practice of business—to see business as something more than the usual functions of manufacturing and getting the product to the consumer. I worked to base business on the spiritual value of man.

The employee's thinking has been the most valued asset, rather than the buildings and dollars. This concept has blessed the company, and has attracted very talented employees, but it demands that employees be treated differently than usual. It even means, for instance, that board members are not chosen for business acumen alone.

What do you mean?

Well, in the company's organizational structure, instead of the traditional line and staff hierarchy with one individual over another, each employee's contribution was regarded as equal in importance and value. When the market planning committee was established, for example, employees ranging from secretaries to marketing vice-presidents attended each meeting and offered their suggestions for new, inventive products. This structure allowed a contribution of everyone's talents.

Business managers may sometimes be guilty of not valuing people, especially when it comes to the spiritual aspect of the individual. But the recognition of these great untapped spiritual resources in each employee can free business from much of the limitation of the nine-to-five burden inherent in material, traditional thinking.

I often thought deeply about these words of Mrs. Eddy's: "In the scientific relation of God to man, we find that whatever blesses one blesses all, as Jesus showed with the loaves and the fishes,— Spirit, not matter, being the source of supply." Science and Health, p. 206.

A lot of people, then, might wonder what role profit plays.

The profit-and-loss statement relates to your credibility, and it's the point that often gets people's attention. I've been grateful for profit because it has represented to me the outcome of radical reliance on God. People listen when you can show results. They're not turned off by the spiritual—they just don't think it's always practical. Profit can be a sign, however, that we're doing things right.

Do you find that people you meet in business are aware of the spiritual concept the company was built on?

Sometimes, but they don't call it spiritual. They call it ethics and honesty. It's been thrilling to see how people give Spirit-derived qualities credit for the company's success.

One way I established this ethical basis was through the method chosen to make discounts on the price sheet for distributors. In the beginning some people thought I was foolish not to sell the bottle directly to some stationers. This would have meant cutting out the wholesaler and his legitimate profit in order to make a larger profit myself. But I decided to forget about the dollar and think instead about the marketing structure as a means of building a business founded on an understanding of Spirit—a business that could bless everyone touched by it.

Some wholesale customers would say, "You'll never sell a bottle of Liquid Paper in my state unless you give me an extra 10 percent." But I wasn't tempted to deviate from what I felt was ethical, because I was working from a spiritual basis. This approach proved effective. It grew from that state of consciousness which has no fear, which is not concerned with the material but with the spiritual. It opened the door, and success kept appearing just the way healing does in the body when we understand substance to be spiritual.

So how or where does money come into the picture?

Money seems to be such an influence. People forfeit their ethics and integrity for it. You might be involved in a court case, for example, and think, "I've got to win this case or I'm going to lose millions of dollars." But the minute you stop looking to the dollars as motivation, it's much easier to tell right from wrong. When money is out of the way, decisions are more likely to be made without fear. We would immediately stand for what was right if we felt there wasn't anything to lose.

You have to be correct yourself, living what you believe. You're not playing a game in business. Too often people think of business as a competitive sport where anything goes so long as you play within the rules or the law. They don't feel their actions necessarily have to be moral. Yet when you have the ethic of complete honesty, you have the power of that honesty. Then you're not playing a game at all. You're expressing Spirit.

Did you face special challenges as a woman running a corporation?

Yes. There have been lots of battles to fight along those lines. Women are broadening their concept of themselves —their aspirations are changing, and the world is changing its thinking about women.

Discrimination or inequality can be effectively dealt with in Christian Science. You need to expect good and allow for it, because God is good. You shouldn't condemn men, but love what they are doing, and appreciate how hard many of them work to help women. When something comes along that is unfair, I've had to get down to a practical spiritual basis, recognize justice is the fact, and then prove this.

Some people may deny there is a power struggle going on, but I think there certainly is. But the struggle is actually between two differing concepts of power—concepts held by both men and women: the supposed supremacy of physical force versus the genuine supremacy of grace and love.

To me, one of the greatest issues facing mankind is the role of women. It has enormous implications, bringing changes in the family, business, leadership, and even in the way countries solve their problems.

Do you mean that changes of this scope will occur just because women are entering into decision making in a greater degree?

No. But because more people are valuing love, for instance, instead of force, and love is where women have traditionally found their strength.

Many people think women will have to become tougher, more aggressive, and even hard as they enter what has historically been a man's world. How do you feel?

I don't believe the way women have tended to think will be lost when they go into business. Instead, that quality of thought will be brought into business. Men will increasingly value the power of love, as women have valued it in raising children, for example.

I can speak from experience. The entrance into business has made me depend more on love—the love that comes from divine Love—because I've seen the futility and powerlessness of brutality and hostility. I've learned to depend more on God's provision of good, supporting every individual.

You've recently started a foundation designed to help women. How does a philanthropic activity fit in with the ideas you built your company on?

You might say this approach to both the foundation and business has more than a religious tone. It's logical and intelligent to realize good comes from God. It all goes back to what is credible, what works. If you're making a profit, if your ideas are practical, if you're healthy—people listen. If these facts— that Spirit is true substance, that honesty is the most practical business basis, that grace and love bring true power—didn't work, no one would listen. But they do work, and people are proving them! 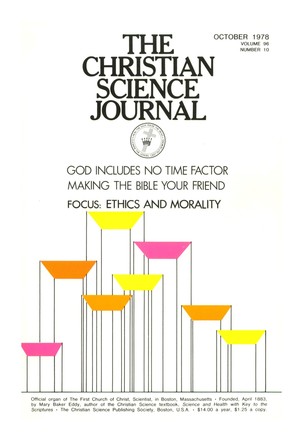 Making the Bible your friend

Proof of healing: "a sound of a gentle stillness"

Church breaks through the mist of material sense

The unethical practice of Christian Science?

My freedom from homosexuality

An interview: She built an international corporation on a spiritual basis