Hearken is not a word you come across in daily speech or conversation. It sounds old-fashioned. In fact, the first time I ever used it was in elementary school, when we sang the traditional English refrain of an old Neapolitan song: “Hearken, hearken, music sounds afar! Funiculi, funicula, funiculi, funicula. . . .”

But as I started being a serious student of Christian Science, I noticed that hearken comes up a lot in the Bible, at least in the King James Version. In fact, it appears 233 times (in various forms). So it must be important, I reasoned. It had to mean more than just “hear,” because it says in Isaiah, “The ears of them that hear shall hearken” (32:3). When I looked up hearken in my dictionary, I found: “To listen, hear, and heed.” In today’s vernacular, it would probably be “Listen up!” or “Pay attention!”

In Scripture, hearken is often used as an admonition to not only listen and hear, but heed God’s voice—or that of His messengers. The Old Testament records how Moses was told by God that he should go to the children of Israel and tell them he was chosen to lead them out of slavery in Egypt. He responded, “They will not believe me, nor hearken unto my voice” (Exodus 4:1). The Lord then gave Moses two signs of His omnipotent power that he should show the people: (1) Following the Lord’s instructions, he threw his rod (walking stick) on the ground and it became a serpent; then, he picked the serpent up by the tail and it became a rod again. (2) Directed to then put his hand in his bosom, once again Moses obeyed, and his hand turned leprous; repeating the motion, the leprosy vanished. If the children of Israel didn’t heed him after he showed them the first sign, the second would offer additional proof.

I’ve given a lot of thought to this. That first sign (the rod becoming a serpent) could have been explained away as magic. The Bible says that the Egyptian sorcerers and wise men (the magicians) could also turn their staves into serpents (see Exodus 7:11). But there is no mention of them ever healing disease. So the second sign, the healing of leprosy, would be the more convincing proof that Moses was sent by the one all-powerful God to save them. They would surely hearken unto Moses’ voice following that irrefutable sign, and they did.

The word hearken is also used in Moses’ prophecy of the coming of the Christ, or Messiah: “The Lord thy God will raise up unto thee a Prophet from the midst of thee, of thy brethren, like unto me; unto him ye shall hearken” (Deuteronomy 18:15). And, “He will magnify the law, and make it honourable,” it says in the book of Isaiah, “Who among you will give ear to this? who will hearken and hear for the time to come?” (42:21, 23). Christ Jesus’ disciples did. They left their homes and their livelihoods in order to follow him.

Instructing a large group of his followers one day, Jesus tells them his parable of the sower. “Hearken,” he begins, “Behold, there went out a sower to sow. . .” (Mark 4:3). He goes on to say that some of the seed the sower scattered to the ground fell by the wayside, some on rocks, and some among thorns, and none of it produced fruit. But some seed fell on good ground. The seed, he explains, is the Word of God, and the seed that fell on good ground represents those “which in an honest and good heart, having heard the word, keep it, and bring forth fruit with patience” (Luke 8:15).

During Primary class instruction, my Christian Science teacher assured us that we were each “good ground”—and told us not to forget it. The last day of the two-week class, he said we’d received God’s Word (heard His truth), and should go home and keep it (hold on to it, cherish it, take it to heart) and bring forth fruit (heal) with patience. To me, this means persist in the calm expectation of healing even when circumstances are trying, and it involves being patient with God, with myself, and with my neighbor. This is what it means to hearken.

Healing is not a matter of personal ability, but is the outcome of the Christ.

Ever since then, I’ve begun my daily study of the Bible and Science and Health with Key to the Scriptures by Mary Baker Eddy by hearkening—not by simply reading or listening to some nice words, which can go in one ear and out the other, but by really listening for God’s message, holding it close to my heart, and obeying it. Not every day has been stellar in this regard, but whenever I’ve fallen short I’ve been brought around by Jesus’ strong wake-up call: “Heal the sick, cleanse the lepers, raise the dead, cast out devils: freely ye have received, freely give” (Matthew 10:8).

In other words, the spiritual truths I’ve freely received I have a duty to God, to myself, and to humanity to “freely give”—to demonstrate by healing. Jesus told his disciples, “In this rejoice not, that the spirits are subject unto you; but rather rejoice, because your names are written in heaven” (Luke 10:20). To me, this meant that healing is not a matter of personal ability, but is the outcome of the Christ (God’s healing message) we are cherishing in consciousness.

Soon after class instruction, I began receiving calls from people who were in need of healing. One night I received a call for help from a young mother whose infant was showing frightening symptoms of something she felt was serious. She asked if I would pray for her baby. Not feeling confident in my ability to treat the case, I suggested she call a Christian Science practitioner who had helped me when I had moved to town and asked for Christian Science treatment. “She’s not available,” the mother answered, “and your name came to mind.”

Just then two passages in Science and Health that had really spoken to me when I’d really pondered them that morning came to me. The first was this: “First in the list of Christian duties, [Jesus] taught his followers the healing power of Truth and Love” (p. 31). That the healing power is Truth and Love (God) was clear to me, so I asked myself, What’s my Christian duty here? This answer came promptly: “Ye are my witnesses, saith the Lord, and my servant whom I have chosen” (Isaiah 43:10).

A witness sees. So my part as God’s witness was to see divinity reflected everywhere in God’s perfect workmanship, no matter what the physical senses reported. And at that moment I committed to doing that all day. That we are God-chosen as God’s witness said a lot to me—that we’re God-called, God-prepared, and God-equipped (God-anointed and God-appointed).

The second passage in Science and Health that struck me was this: “If the student adheres strictly to the teachings of Christian Science and ventures not to break its rules, he cannot fail of success in healing” (p. 448). This had pointed out to me that there were just two things I needed to do: (1) stick to the truth I’d been taught (the inseparability and perfection of God and His child) no matter what appeared to be the case; and (2) venture not to break its rules.

I noted that the counsel wasn’t “doesn’t break its rules,” but “ventures not” to do so. That spoke to me of motive. There could be a rule I hadn’t come across yet, but my desire was and would be to do it God’s way. That would be a pure motive, and that is obedience. And the promise that that obedience meant I could not “fail of success in healing” had so encouraged me.

My plan to “someday” enter the full-time public practice of Christian Science was revised. That phone call from the mother asking for treatment was, to me, a demand that I hearken to God’s voice now, without hesitation, and put into practice what I understood. I don’t remember what I said to that mother that night, but together, she and I prayed, trustingly, knowing her child was in Love’s omnipotent care. And we watched God work. Quickly, that baby rallied, then slept well and awoke totally free of the complaint.

Needless to say, soon after this experience, I went into the healing practice full time.

Though the word hearken still sounds old-fashioned to my ear, it will always have special meaning to me. 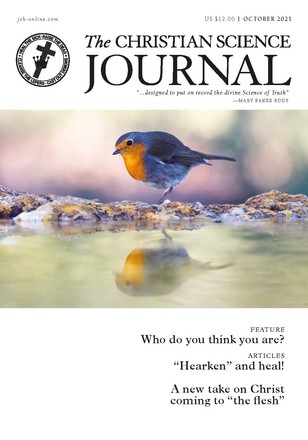