There are ways out of the trap of depression—ways that avoid the slippery road of becoming heavily dependent on drugs. I found such a way, and it taught me some of the most useful lessons I've learned in my life.

In the 1980s, I started having extreme attacks of depression. They were accompanied by feelings of total incompetence. These attacks spanned a period of more than seven years. I was unemployed during this time (with no unemployment compensation for over 30 months). The attacks became more and more virulent in the six months before they suddenly stopped. They ended once and for all after a telephone conversation with a friend of mine. More about that later.

When I look back over this period, I feel there were several key factors in my healing. First, I learned to be "stedfast, unmoveable," to use words of the Apostle Paul. I Cor. 15:58. I liked words that described what I wanted to be, and I discovered dozens of them—words expressing the idea of unyielding steadfastness. They included undeflected, unrelenting, unwavering, dogged, unflagging. Periodically I would say aloud to myself: "I will never, never, never,... never give in. I will never, never, never,... never give up." This wasn't a form of self-hypnosis or autosuggestion. It was a conviction about my true, spiritual nature. God is Principle and cannot be shaken; so, as the likeness of God, we are naturally unmovable.

I liked words that described what I wanted to be—steadfast, unwavering.

A second lesson was the intuition that this trial I was going through held a hidden blessing. God doesn't send trials, but we do learn valuable lessons from them. I often thought about this statement from Science and Health: "Trials are proofs of God's care." Science and Health, p.66. And about St. Paul's idea that "all things work together for good to them that love God." Rom. 8:28. All things—not most of them, not 99 percent of them, but all of them, all the time, everywhere. Another statement that helped me in a special way—and that has since become one of the mainstays in my life—is this verse from Psalms: "It is God that girdeth me with strength, and maketh my way perfect." Ps. 18:32. I started repeating it slowly, thoughtfully, in complete faith, many times every day. Today I understand it to mean that because God is All, infinite good, only wonderful things are happening in reality—despite all appearances to the contrary.

A third discovery that became a healing tool had to do with the power of gratitude. I saw that gratitude could not possibly coexist with any negative feeling or thought. For a long period, every evening I would make a list of the things I was grateful for that day, from the smile of a child to a sunset. I found that gratitude is a powerful antidote to any kind of difficulty one faces. Yet this isn't simply positive thinking. In its deepest sense, gratitude is being thankful for God's allness. Thankful for our spiritual status as God's reflection, which can know nothing but eternal joy. What more meaningful reason for gratitude could a person have?

In its deepest sense, gratitude is being thankful for God's allness.

Refusing to feel I was a victim was another lesson I learned along the way. I found that accepting total responsibility for one's actions is extremely important. Referring to Jesus, Mrs. Eddy wrote, "He did life's work aright not only in justice to himself, but in mercy to mortals,—to show them how to do theirs, but not to do it for them nor to relieve them of a single responsibility." Science and Health, p. 18.

During this time I began to see that I was depending too heavily on the prayers of a Christian Science practitioner who was helping me. That help was certainly beneficial. Being able to call on someone in this way is wonderful provision of God's love. But in this case I needed to see that God was the actual healing power, not a person, and that I was spiritually empowered to pray for myself and be healed.

Slowly, over the years, and in a very subtle manner, I had let myself become caught in a trap. Rather than pray vigorously for myself when an attack of depression came along, I would just pick up the telephone and call the practitioner. The turning point came one night when I phoned a dear friend. My friend gently pointed out that Psalm 23 doesn't say there is no valley of the shadow of death. Rather, it states that if we are in the valley, God is with us. See Ps. 23:4 . The same for Psalm 139: "If I make my bed in hell, behold, thou art there." Ps. 139:8. I felt I was in hell. But my friend said not to pretend bad feelings weren't there, but to acknowledge that God had given me authority over them. I can't explain why specifically, but at that very moment, seven years of anguish fell away like an old cloak. There has been no return of the condition.

I've come to understand that my only enemy is the little human ego that calls itself "I." Fear, anger, hatred, envy, depression, disease, can attach themselves only to this false ego. They have no place in the divine Ego, God, or in its expression, which is who we really are.

When men are cast down,
then thou shalt say, There is lifting up;
and he shall save the humble person.
He shall deliver the island of the innocent:
and it is delivered by the pureness of thine hands.
Job 22:29, 30 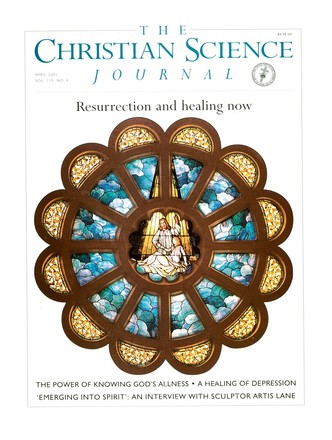 The story of the resurrection

By Colleen Douglass with contributions from Artis Lane | April 2001

Time—only a way of seeing things

Breaking the bounds of religion

A healing of depression

An end to 'My Year of Drinking Dangerously'

A Celebration of Healing

Feeling an urge to pray? Listen

The power of knowing God's allness