The word "weather" is used to indicate the state of the material atmosphere as to heat or cold, wetness or dryness, calm or storm, cloudiness or clearness. In recent times nations, recognizing the importance of weather in human experience, have sought to discover the physical factors and forces causing atmospheric changes, and to anticipate and foretell weather conditions.

Even more needed is enlightenment as to what men can do to control and forestall those atmospheric conditions which are destructive and obstructive to right human activity, and cause to appear those more normal atmospheric conditions which contribute to the security and well-being of the human family. There is no bad weather in the kingdom of God, and we can begin now to demonstrate this. Because tornadoes, fogs, intense heat and cold, excessive dryness or wetness are not attributable to God, they must give way before a better understanding of Him and His spiritual forces.

Christian Science teaches that nothing is outside of, or beyond, God's control— not even the weather. If you have backed away from the thought of applying divine Science to demonstrate God's power to control the weather, remember that God is infinite; that the extensiveness of the outdoors is not in the least formidable when considered in the light of Mind's infinite presence. God is honored when we realize that the harmony-producing forces of deific Mind are not active just somewhere, but everywhere, controlling every effect, and demonstrating the simple truth that "the earth is the Lord's, and the fulness thereof."

The material atmosphere has been described as "a heat engine of planetary proportions, with the boiler at the equator, and the condensers at the poles." Radiation of the sun's heat maintains an excess of thermal energy in the lower latitudes, and keeps the system constantly out of balance, and consequently in constant operation. In an effort to achieve an equilibrium, a planetary circulation of the atmosphere is evolved which brings masses of cold air to the tropics in exchange for warm air transported toward the poles. The conflict of these cold and warm masses generates storms.

This effort of physical force to produce an equilibrium between the forces of heat and cold is the physical explanation of all atmospheric disturbances. Physical forces are the materially mental forces of the basic error, mortal mind. These forces are subjugated and controlled in the degree we realize that because God, immortal Mind, is the only Mind, infinite and omniactive, there are actually no forces but the moral, spiritual, intelligent forces of this Mind which produce only order and peace.

These positive forces constitute, maintain, and govern the universe, and all of God's ideas therein, in the atmosphere of intelligence and Love, wherein there are no opposing forces, but a universal constancy and equality of the one true force—Mind-force—which ensures the security, harmony, and unhampered activity of all.

These are some of the truths which may be used to subjugate and make subservient, instead of dominant, the forces that produce weather conditions. Says Mary Baker Eddy, "Immortal Mind, governing all, must be acknowledged as supreme in the physical realm, so-called, as well as in the spiritual" (Science and Health with Key to the Scriptures, p. 427). Certainly this is what Christ Jesus did when he said to the winds and waves, "Peace, be still." Negative physical forces had no alternative but to yield to the infinitude of omnipotent Mind-force, confidently understood, and unhesitatingly trusted, by this spiritually-minded man.

Mortals have differing views about the weather. Some like it hot; some like it cold. An artist, a child, and a skier may like a heavy fall of snow, while railroad men, bus drivers, merchants, and motorists may dislike it. Air pilots dislike storms over the mountains, but farmers, needing water for irrigation, rely on these storms to fill their reservoirs.

What seems desirable weather to some, sets things out of balance for others. So of course one does not work with the truths of divine Science to produce weather to suit his own personal preference. He does not presume that his human preference has the authority of divine law. The Christian Scientist is not interested merely in bringing out conditions more satisfying to himself. His interest is, through an increasingly clear understanding of the omnipresence, omnipotence, and omniaction of God, to prove the superiority of spiritual power over physical force, with resulting atmospheric and climatic conditions which are less and less destructive, and more and more constructive; which are less obstructive to right human activity, and more contributive to the welfare of mankind.

Working from the basis of divine Science, which is the very atmosphere of God, he becomes more and more aware of the equipollence, or universal equality, of the spiritual forces of Mind, and the inevitable stability and balance resulting therefrom. The human needs of all climes and classes for serviceable weather will be met as the controlling power of omniscient Mind is realized. Under this all-knowing, all-loving, all-controlling power, groups and individuals will find their thought no longer disturbed by weather most needed by the greater number, nor will their normal activity be hindered thereby. Droughts will give way to necessary precipitation as thought looks not to the sky, but to the Most High, whose adequate means for meeting the human need no combination of physical forces or circumstances of any kind can contravene. The forces of evaporation, condensation, distribution, and precipitation are all subject to His will.

We need not accept as final the predictions of a weather bureau. The meteorologists diagnose the physical conditions, and base their forecast thereon. They make no pretension to consideration of the supremacy of the forces of God. Only the Science of Christianity does that. Jesus saw that the phenomenon of the storm was in the light of divine Science as false as leprosy or paralysis. So we may properly realize that the prophecy of any phenomenon that would be contrary to the will of Love and the law of God cannot eventuate. He who is All accords it no substance, power, activity, or place.

Man, individually and collectively, lives in the atmosphere of divine Science, wherein all conditions of being are held in balance by Mind. The spiritual fact is that into this realm, mortal mind and its phenomena have no entree. Excluded from God's infinitude, they cannot threaten or endanger man's God-secured, God-embraced being, cannot encroach upon the continuous unfoldment of good in his life, cannot hamper or restrict his God-ordered activity.

God said of man made in His image and likeness (Gen. 1:26), "Let them have dominion ... over all the earth." Jesus proved this dominion includes dominion over the atmosphere. So must we. 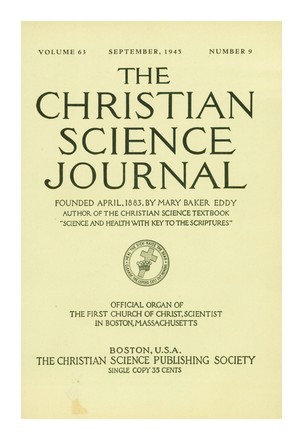 FAITH, ITS IMPORTANCE TO DEMONSTRATION

DIVINE MIND, THE SOURCE OF PEACE

SOWING BESIDE ALL WATERS

HAS THE THOUGHT STRUCK YOU?

"THE HOPE OF OUR RACE"

JESUS AT TWELVE YEARS OF AGE

TRUTH RATHER THAN FALSE IDEALISM

THE PEACE OF UNDERSTANDING

LOVE HAS ONE RACE

WAR NO PART OF TRUE CONSCIOUSNESS

"NOW ARE WE THE SONS OF GOD"

IMPOSSIBLE? DON'T YOU BELIEVE IT!