One of mankind's worst enemies is hatred. It may be discomforting to be hated, but it's injurious to do the hating. One who hates, harboring intense animosity against another, sometimes feels the bad effects physically in tension and other unhealthy stimulation of the body. These symptoms should warn him of the danger he is courting by hating.

Mrs. Eddy quotes Hannah More as saying, "If I wished to punish my enemy, I should make him hate somebody." See Mary Baker Eddy, Miscellaneous Writings, p. 223; And elsewhere our Leader warns: "Hate no one; for hatred is a plague-spot that spreads its virus and kills at last. If indulged, it masters us; brings suffering upon suffering to its possessor, throughout time and beyond the grave." ibid., p. 12; Yet she also reassures us, "Clad in the panoply of Love, human hatred cannot reach you." Science and Health, p. 571;

Christ Jesus preached God's law of loving one's neighbors under all circumstances—even though humanly they may seem to be bitter enemies working against one's very life. The Master's own ultimate demonstration of loving even those who nailed him to the cross is our example.

He not only taught but practiced the doctrine that there is no situation in which hatred against another is legitimate, and Christian Science maintains that it is in our own interests invariably to express love. Hate's virus is always deadly to the one who lets it infect his thoughts and actions—it is much more dangerous to him than to the one against whom he directs his hatred—but love heals.

How can we love when others hate? Prayerful turning to God, divine Love, with the earnest desire to express His qualities under all circumstances will give us strength and ability to do right. At one time Mrs. Eddy must have found the following words a source of comfort for she had them displayed on her bedroom wall: "When others hate, oppose, ignore, help me, dear God, to love them more." from the Archives and Library of The Mother Church; Her gentle but uncompromising response to enmity was proof that her prayer was answered.

Christ Jesus prayed for his tormentors, "Father, forgive them; for they know not what they do." Luke 23:34; Such Christly response is a triumph for good over evil and a stride toward the demonstration of hate's powerlessness—even its utter nothingness in the true universe of Love's creating. And Christian Science shows that all who respond in this Christly way are sure to win their safety, even from ill will that may humanly be specifically directed against them.

Reasoning as it does from the basis that God, divine Mind, is the one creator of the universe and man, Science maintains that there is, in truth, no hatred and no hater. In God's spiritual universe all His creations, including man, are emanations of that Mind which is also divine Love; they are therefore infinitely intelligent and infinitely loving.

Hating human beings are not the offspring of God. They represent in the dream of mortal existence a counterfeit creation—a race of nonintelligent beings who have no actual identity because they do not represent Love, the one living Principle of true being. People who identify themselves with hate deny their true identity as Love's expression.

Such people are their own enemies. Not recognizing and honoring the true idea of Life as Love's expression, they are liable to hate and even to want to kill the very power that could save them from the suffering they have brought on themselves by their false beliefs. They are influenced by what the Apostle Paul referred to as the carnal mind, which he says "is enmity against God," Rom. 8:7; and which is the selfsame originator of false suggestions that Christ Jesus summarily dismissed with the words, "Get thee hence, Satan: for it is written, Thou shalt worship the Lord thy God, and him only shalt thou serve." Matt. 4:10;

Hatred of the spiritual idea, which has the tender mission to enlighten and heal mankind, was directed against Christ Jesus, who so superbly embodied that true idea nearly two thousand years ago. Today hatred is often aimed at Christian Science and its Leader, Mary Baker Eddy, even as it was during her time on earth. Anyone who has glimpsed the sublime purpose of the Christ and experienced its healing power may feel hurt and heartsick to sense the bitterness so misguidedly directed against both its manifestation and its revelation. But this is no remedy for hatred against the truth.

In a message to The Christian Science Board of Lectureship, Mrs. Eddy once wrote: "When error strives to be heard above Truth, let the 'still small voice' produce God's phenomena. Meet dispassionately the raging element of individual hate and counteract its most gigantic falsities." The First Church of Christ, Scientist, and Miscellany, p. 249. And experience shows that as we return blessing for cursing and pray always for the enlightenment of those who are so grossly misled, prejudice can be counteracted, misunderstanding corrected, and hatred healed.

It is not easy for human beings to meet hatred dispassionately, but we can follow faithfully the example of the Master. With conviction we can dismiss the suggestion that hate is the natural response to hate, and resolve to express divine Love alone, even under bitter provocation. An example of this is to be found on page 576 of this magazine, in the Church in Action column. There the story is told of a Christian Scientist who worked as an advertising salesman for The Christian Science Monitor. In the course of his work he was confronted by the proprietor of a shop who said he had hated Christian Science for twenty-five years. Wise, compassionate handling of the situation led to enlightenment and the dissolving of unreasoning hatred—as well as an advertisement in the Monitor.

Hatred against the truth cannot harm truth. Nor can hatred harm those who take a stand for Truth by preaching, teaching, or practicing it. There is, in fact, no carnal mind to send forth hateful thoughts, because there is but one Mind and that one is divine Love. By taking this mental stance we are safe—"clad in the panoply of Love." Human hatred is rendered innocuous, and Love's eternal triumph proved. 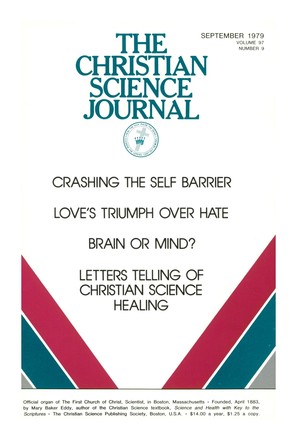 "He restoreth my soul"

Get rid of frustration

The radiance beyond the glow

Crashing the self barrier

A lesson from the tomato plants

Your lecture—a season to cherish

"Enough and to spare"

The healing has to come

For a stronger marriage

The metaphysical basis of writing for our periodicals

When the divinely scientific teaching...

While I was serving in the Christian Science Reading Room...