Not a rock climbing buff? That's OK. You could still cheer what Gerry Bloch accomplished a while back when he scaled EL Capitan in Yosemite National Park. He didn't take the comparatively easy route up what's called The Nose that he took on his previous climb several years before. On this more recent outing he ascended the difficult Aquarian Wall. That's 2,500 feet pretty much straight up a granite slab. Oh, and one other thing that made his ascent newsworthy: he was eighty-one at the time.

Don't care for golf either? You can still admire the play, if not the final score, of John Elliot, eighty-one. Earlier this year when he competed at the inaugural Octogenarian Open in Riverside, California, he shot a nine-over-par 36. The score was good enough to edge out his golfing buddy for the day. That was his dad, Paul Elliot, one hundred three, who also played at the Octogenarian Open.

Undimmed life and usefulness are natural and inevitable.

A steady stream of upbeat stories tells of ordinary folks in their eighties and nineties and hundreds who are scaling mountains, returning to complete their schooling, reentering the work-force. And for every story retold in the morning paper, hundreds, perhaps thousands of unheralded victories—which speak of limits pushed back and of purpose renewed—unfold without fanfare.

Some of these stories highlight feats of physical prowess, others of keen mental acuity, still others of deep humanity. But maybe their value is not just the inspiration they offer. Maybe it's a larger truth they point to. A truth telling the listener that decrepitude is not natural or inevitable, but that undimmed usefulness is. And even if the individual isn't always convinced of this truth, something in him or her intuitively senses that life ought to be so.

Startlingly new as these stories may be to some readers, the truth behind them isn't new at all. It's at least as ancient as the book of Job in the Bible. "Thine age shall be clearer than the noonday; thou shalt shine forth, thou shalt be as the morning," says Job. Interestingly, what Job says poetically, some astrophysicists say academically: There is no connection between the daily spinning of the earth, its annual circling of the sun, and the aging of humans. So, then why not challenge the notion that life is an irreversible dawn-to-dusk journey? That evening is coming? That night must fall?

Perhaps the words leading up to Job's promise tell just how to make that challenge. "Thou shalt be stedfast, and shalt not fear: because thou shalt forget thy misery, and remember it as waters that pass away: and thine age shall be clearer than the noonday; thou shalt shine forth, thou shalt be as the morning." See Job 11:15-17. What does this hint? Could it be that it's not the passage of days and years, but the kind of thinking and living that goes on during those days and years that sometimes pushes a person toward night? Or, better, that makes morning brightness a constant? When a person is steadfast in goodwill, is not fearful in outlook, and doesn't endlessly rehearse old miseries but lets them wash away and moves on to new opportunities—then, knowingly or unknowingly, that person is drawing on spiritual resources. Resources from the Father that give each person assurance of divine Love's care and that also distance him or her from past hurts and fears. Resources that help people find life to be brighter, fresher, less abrasive, and therefore less calendared.

The renewing power of love is at its clearest when one realizes that its source is not a human mind trying to "think young." Rather, it is God, Mind—the Life and Love of the universe. As the love of divine Love renews a person, it becomes easier to be steadfast in charity, free from fear, focusing ahead on opportunities, not back on miseries. And this more divinely based outlook removes any hint that aging has validity or inevitability. Signs of aging slow or even shift into reverse, while individual purpose and productivity move forward.

But the goal isn't to use spiritual means in order to race after the same thing an obsessed-with-youth culture races after with unspiritual means. It's not to make a mortal into a younger mortal or slow down the aging process. It's to discern something of one's actual nature as immortal, Godlike, to see and know oneself as forever poised in the undimmed light of Life. At the standpoint of perfect usefulness. With a love that is timelessly fresh.

Consider Jesus. Though he obviously was never an octogenarian, his example reveals a lot about ageless living and thinking. Note his unharried calm, his unfading purpose of healing and saving humanity. Think of his love, never for a moment strained with compassion fatigue. None of these suggest a man crowded by time. All of them point toward ageless living. If there was no sunset to his goodness, purpose, power, or love, perhaps it's because he knew their source was in God, uninterrupted Life, immortal Love, ever-clear Mind.

Journal founder Mary Baker Eddy, in her main work, Science and Health, gives a definition of evening that says in part, "Mistiness of mortal thought; weariness of mortal mind; obscured views." Science and Health, p. 586. Are these the very difficulties that haunt some people in old age? Then remember this counterpoint to "evening" troubles: Christ's dawn is eternal. Christ, the message from God to human consciousness, tells of each person's timeless, incorporeal identity. And even if someone doesn't at first "get it," the message of Christ tenderly keeps coming until its good news breaks through. For any metaphorical "evening" of old age to envelop someone in darkness, it would first have to darken Christ. And that's not about to happen anytime soon—not ever, in fact.

From the sun's perspective, the earth is always in the light. From God's perspective, men and women never drift toward night. The light of Christ illumines people's view until they begin to see themselves as God already sees them: with bright and endless capacity.

Then, the views of others matter less. Do you find yourself doing OK until someone treats you as old, feeble, or incompetent? And then do you sometimes find yourself feeling and acting just like the person they're treating you to be? When you stay spiritually alert, you can defeat that pattern. You can prevent yourself from responding incompetently or feebly. Identify yourself as divine Mind already identifies you—with a nature that is timeless in its love and promise and purpose. Then you'll be less tempted to say, "It's too lonely, too painful, too aimless to keep going." Lies, all! They are temptations from what the Bible calls the "carnal mind," not from the Mind of Christ. Mind knows each person as he or she can know himself or herself: as whole, able, needed, cherished by divine Love, timelessly held as the likeness of God.

A friend of mine, way past normal retirement age, still comfortably walks several miles a day. She tells me that a main incentive for her desire to live is that she might be useful to others. I glimpse in that incentive the renewing power of love. And this incentive works for anyone. No need to climb mountains or walk miles. Every time one prays, every time one loves with Christly affection, one is useful to others.

Mary Baker Eddy drew on the same dawn-to-dusk metaphor that the author of Job found useful. And she, too, repudiated its inevitability. She wrote: "The measurement of life by solar years robs youth and gives ugliness to age. The radiant sun of virtue and truth coexists with being. Manhood is its eternal noon, undimmed by a declining sun. As the physical and material, the transient sense of beauty fades, the radiance of Spirit should dawn upon the enraptured sense with bright and imperishable glories." Ibid., p. 246.

As Spirit's radiance continues to dawn, don't be surprised to find the evening of mortal life less and less able to overtake you. And to find yourself basking more in the dawning light of Christ. It's a light revealing who each person truly, agelessly is—with purpose, promise, usefulness, forever intact.

Channing Walker is a contributing editor. 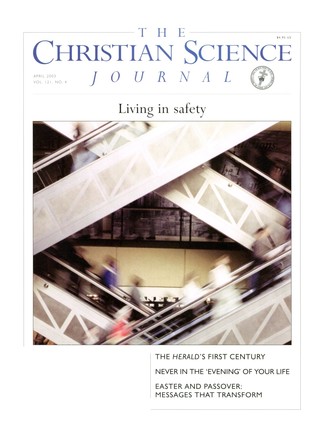 'I will fear no evil'

I got into a stranger's car

In the middle of the storm

By Jeffrey Hildner with contributions from Geoffrey Barratt | April 2003

Never in the 'evening' of your life

Gratitude for the healing effect of church

Spirituality in the workplace: a quality experience

Bringing calm to work—and beyond