A line in Science and Health with Key to the Scriptures by Mary Baker Eddy was a great help to me in my career some years ago when I was a fledgling businesswoman. It turned what seemed like a nightmare into an important spiritual lesson in trusting God to guide and govern my life.

My first job out of college was with a nonprofit organization that I greatly admired, and I felt I was doing important work. I had been there for about a year, employed in a busy office with many contemporaries and much dynamism, when I was offered a promotion that would transfer me to a management position in another department.

This new role meant overseeing a small group of individuals much older than I, who had worked together for decades and whose office space was dark, ultraquiet, and located in a building that was separate from all the activity. It was quite a contrast to my prior setting.

The next few months were dismal; no one was friendly or cooperative. In fact, they were openly hostile, timing my breaks and monitoring my phone calls so they could report any infractions. (I later learned they had expected one of their own department members to get the promotion.)

I felt isolated, became depressed, and chided myself for accepting the promotion. Why had I ever left the warm and friendly setting of the prior job? Some days were so difficult that I needed to call a Christian Science practitioner to receive spiritual reinforcement just to get through the eight hours. In addition, I found myself struggling with a nerve problem often associated with stress. The days were long, and I dreaded going to work each morning.

That’s when this line from Science and Health came to my rescue: “The very circumstance, which your suffering sense deems wrathful and afflictive, Love can make an angel entertained unawares” (p. 574). The wording of that sentence resonated forcefully since “wrathful and afflictive” seemed to describe my situation so aptly. And yet, I was being reassured that even in my circumstances, I could be rescued by angels—inspired thoughts from God that would bring relief and healing. I felt God had spoken directly to me through these few words—reminding me that I wasn’t forgotten, strengthening me in my prayers to express the love that would heal the animosity, and encouraging me to persist and even reap blessings from this experience.

I recognized that this was an opportunity for spiritual growth. So, although tempted to many times, I did not resign or ask for my old job back. Instead, I consistently prayed to live each day to reflect God’s grace and strength. I prayed for the spiritual composure to maintain my joy and express the intelligence needed to do a good job. I took on projects wholeheartedly and made an effort to appreciate the spiritual qualities of reliability and faithfulness expressed by the staff. I reasoned that this promotion had been an answer to prayer and that the all-loving God was not going to forsake me now. A verse from the book of Job in the New Living Translation expresses well how I felt: “But he [God] knows where I am going. And when he tests me, I will come out as pure as gold. For I have stayed on God’s paths; I have followed his ways and not turned aside” (23:10, 11).

I began to realize more fully that God’s spiritual law of harmony and order was guiding all the details of my career. And I could trust this law to resolve the circumstances in a way that would bless everyone involved, not just me.

As the months went by, changes began to slowly and naturally take place—but not as I had expected.

I had imagined that I would be offered another job which would take me out of the department and remove me from the troubling situation. But something else happened. The all-knowing Mind, God, unfolded His plan in a much more expansive way.

Upper management determined that my department should be enlarged, and consequently they created new positions. These openings were filled with young people who accepted the jobs because they saw me, another young person, already working there. (What great proof that one person can make a difference.) Friendships with many of the senior staff members soon developed, some of whom invited me to dinner in their homes.

The character of the entire department was transformed and revitalized, making it a joy-filled place to work, staffed by supportive coworkers, and introducing new energy and fresh ideas to the important work being done. It’s no surprise that with the transformation of my thought and resulting spiritual growth, the nerve problem was healed, too.

And an unexpected bonus even emerged: The nonprofit organization soon invested in a beautiful new office building that brought everyone under one roof and provided all the departments with handsome, light-filled surroundings and ready access to one another. This created an atmosphere of inclusion, connectivity, shared enthusiasm, and mutual support that blessed not only me and my department, but everyone who worked there. 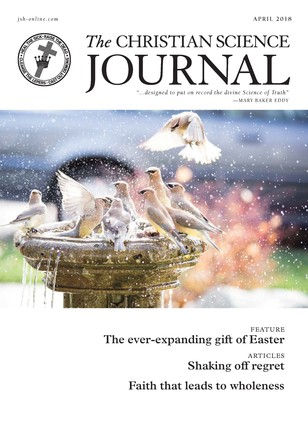 Why should a young person read a Journal, Sentinel, or Herald article?

The ever-expanding gift of Easter

How can I understand ‘the scientific statement of being’ better?

A revelation of pure Love

Agree to stand with God

Spiritual education and its profound results

Faith that leads to wholeness

Building the highway of thought

Peace and health restored after accident

A Healing of Polio Symptoms

‘Nothing could keep me from praising God’