. . . or, for that matter, a political independent. He is the one intelligent and impartial power to whom we can each go for guidance. Whatever our concerns about fair and democratic government, whatever our politics, we can turn to Him wholeheartedly for solutions. He is the divine Being of whom Isaiah speaks when he says in the Bible, “The government shall be upon his shoulder” (9:6). It is He who shoulders the demand to care for His creation. It is He who holds the reins of power in His hands. It is He who, in the most divisive of times, unites us all.

To be ruled by the Almighty is to yield to His divine government—to the one God we all have, who governs His creation harmoniously. An understanding of His rule, even to a small degree, transforms human consciousness, and therefore transforms, to some degree, human events and politics—both of which are impacted by the leaven of Truth operating in human consciousness. The promise of just and fair human government becomes more of a reality in our lives as it reflects the divine. In other words, the ideal of fair and just self-government—which is the ideal rooted at the center of democracy—originated with God, not with mortals.

Journal founder Mary Baker Eddy had this to say: “God has endowed man with inalienable rights, among which are self-government, reason, and conscience. Man is properly self-governed only when he is guided rightly and governed by his Maker, divine Truth and Love”
(Science and Health with Key to the Scriptures, p. 106).

God, the Maker of all that is good, who is both eternal Truth and infinite Love, keeps His universe under His control, subject to His reign. He—and not a group of mortals pushing the agenda of this or that political party—governs in a manner that is not hit or miss, but is constant and perpetually fair. Even if this has not always been apparent, it has always been true. And, the fact is, it has been quietly growing more apparent for a long time.

Consider, for instance, Gideon from the Old Testament. He refused a flattering offer to become king, and to have his son follow him as king. Gideon said, “I will not rule over you, neither shall my son rule over you: the Lord shall rule over you” (Judges 8:23). This in itself is not automatically a step toward a more democratic government. But it comes close. And it definitely is a refusal to step away from the promise of democracy. Best of all, it is an affirmation of the promise that “the Lord shall rule over you.” That is true even if appearances suggest otherwise.

Prayer for good government—regardless of our political leanings—could include an acknowledgment that God, the one Truth, continuously reveals His unbroken capacity to govern.

Picture this. You stand at a work site holding a stack of window panes. But instead of installing them, you drop the glass. It shatters into countless pieces. Isn’t that a bit like today’s political landscape? What momentarily looked clear and orderly gets fragmented, reduced to wreckage. It is not at all the scene of God ruling over His spiritual universe.

But wait! Does the falling-glass analogy hint at a spiritual remedy? Maybe so. Suppose you filmed that little incident with the glass, and then replayed it in reverse. The wreckage magically reassembles itself into whole and unified panes of glass, without so much as a crack on them.

In the same way, our prayers can do much toward restoring what would appear to be broken government or broken-down relations. We can know that the laws of God, which Mary Baker Eddy referred to as “Science” (see Science and Health, p. 127), are always operative and hold in their original, harmonious state all of God’s ideas. She once noted, “Science reverses the false testimony of the physical senses, and by this reversal mortals arrive at the fundamental facts of being” (Science and Health, p. 120).

So prayer for good government—regardless of our political leanings—could include an acknowledgment that God, the one Truth, continuously reveals His unbroken capacity to govern. Prayer could include, in the spirit of a modern-day Gideon, a refusal of flattering offers that might warp the best of intentions. It could include recognizing the scientific power to reverse whatever needs reversing in human affairs and to magnify the already-present aspects of good government that now may seem concealed.

These actions—the revealing of God’s true nature, the Gideon-like refusal to be pulled off course, and the scientific reversal of whatever is not in keeping with His divine law—make for powerful prayer. They apply to challenges facing democracies around the globe. For starters, consider a few current challenges calling out for our prayers.

Which will it be: government grounded on the equal right of every person to participate? Or a society ruled by its wealthiest members? For many, the questions became real for the first time, with the hundreds of millions of dollars that poured into campaign coffers. These funds have come mainly from a tiny handful of donors during this most recent US election cycle. Could this tip circumstances out of balance? If so, does prayer have the capacity to help bring concerns back into balance, back into that which is expressive of God-maintained fairness and justice? Absolutely.

As we mentally weigh in on the side of God’s goodness, Spirit’s allness, it gets easier, or at least possible, to glimpse that money does not outweigh all else. Persist in this prayer, and the accumulation of money and materialism that some voters feel tilts the power in a plutocratic direction, does not irresistibly do so.

Think of Christ Jesus’ parable of the rich man and his barns. He tore them down and built bigger ones. But this left him “not rich toward God” (Luke 12:21). And without spiritual riches, did the rich man’s resources outweigh all else? Not really. The thing to do, if we are committed to being a prayer-based problem solver, is: Continue to cherish true spiritual richness and righteousness. Let those spiritual qualities be revealed spiritually. It follows that they will be expressed humanly, possibly as honest and honorable hearts, actually engaged in “government of the people, by the people, for the people” that “shall not perish from the earth” (Abraham Lincoln, The Gettysburg Address, Gettysburg, Pennsylvania, November 19, 1863).

The place of compromise

It does have a place, and not just one in which the other guy knuckles under and yields to what you or I believe. It has a place even though some voters and some officeholders in our political parties savor the saying, “I won’t compromise my principles.” As a stand-alone statement the assertion has merit. Trouble is, the commendable sentiment of the words can get lost in a battle of human wills. Could prayer reduce the grip that human will seems to exert over some politicians? Refuse to give willfulness an opening. The divine will is truly the controlling power. The divine will is directing the Almighty’s hands. The divine will, and not the human, reigns supreme.

Think of the Lord’s Prayer (see Matthew 6:9–13). It turns all pray-ers to the divine will. Remember that it includes the phrase, “Thy will be done.” That’s “[God’s] will be done.” And even before you pray to yield to His will, you pray the words, “Our Father.” Those first two words establish the common ground on which healings of willfulness regularly take place. Opportunities for productive compromise routinely take root. Stubbornness loses its hold.

That’s not all. Early in his ministry, before teaching his followers the Lord’s Prayer, Jesus himself gave the example of all examples. He compromised. It was when the Master came to John the Baptist to be baptized. John balked at the prospect. Evidently he felt (and understandably so) that Jesus should baptize him, not he Jesus. The Master explained it to John this way: “Suffer it to be so now: for thus it becometh us to fulfil all righteousness” (Matthew 3:15). The take-away? Even in a government expressive of divine certainties, compromise can make a healing, harmonizing contribution.

In the run-up to the US presidential election, some voters on each side of the aisle filled in the blank with whichever major-party candidate they most disliked. But contemptuous blame is not a healer. That can be reversed. All that is true of divinely based government, in the United States or elsewhere, all that is irreversible, will not cease to exist. Good, including good government, comes not from a person or group of persons. It comes from God. The God who is neither a Democrat nor a Republican (nor a political independent) remains the one divine source. His government—the government of Love and Truth—is reflected, to some degree, in our human government today.

To realize this rigorously and regularly takes a load off a human or a group of humans trying to do the right thing and run the country effectively. It reestablishes the real worth of democratic government. It reduces willfulness on everyone’s part. It diminishes contemptuous blame for an individual candidate or an individual office holder, and replaces it with the spirit of appreciation. For the ideal of self-government. For all the goodness dwelling at the heart of democracy. For the fact that the ideal really did originate with God, not with us.

To recognize this is also to help establish a kind of spiritual underpinning to the efforts of whoever ends up in office. Then the spiritual fact becomes more apparent humanly. “The government [that] shall be upon his shoulder” is already in place. Blessings abound. 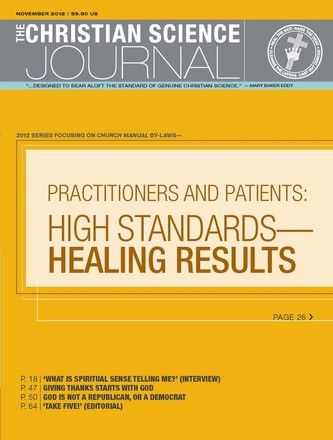 What can we do when we read online posts that ask for prayer?

What did Mary Baker Eddy see in Matthew 9, verse 2?

An 'unprejudiced mind' touched by a lecture

The 'progress' of Church: an expanded view

What can I do if I feel I’ve chosen the wrong teacher?

'What is spiritual sense telling me?'

David Haughton in conversation with the Journal's Joan Taylor | November 2012

Snug harbor . . . or no ruffled feathers

Healed of many ills

The Holy Ghost: antidoting the poison of willpower