Is there infinite progression with man after the destruction of mortal mind? DENVER.

Man is the offspring and idea of the Supreme Being, whose law is perfect and infinite. In obedience to this law, man is forever unfolding the endless beatitudes of Being; for he is the image and likeness of Infinite Life, Truth, and Love.

Infinite progression is concrete Being, which finite mortals see and comprehend only as abstract glory. As mortal mind, or the material sense of life, is put off, the spiritual sense and Science of Being is brought to light.

Mortal mind is a myth; the One Mind is immortal. A mythical or mortal sense of existence is consumed as a moth, in the treacherous glare of its own flame—the errors which devour it. Immortal Mind is God, immortal Good; in Whom, the Scripture saith, "We live, move, and have Being." This Mind, then, is not subject to growth, change, or diminution, but is the Divine Intelligence, or Principle, of all real Being, holding man forever in the rhythmic round of unfolding bliss,—a living witness, and perpetual idea of inexhaustible Good.

In your book, Science and Health, page 181, you say: "Every sin is the author of itself, and every invalid the cause of his own suffering." On page 182 you say: "Sickness is a growth of illusion, springing from a seed of thought, —either your own thought or another's." Will you please explain this seeming contradiction?

No persons can accept another's belief, except it be with the consent of their own belief. If the error which knocks at the door of your own thought originated in another's mind, you are a free moral agent, to reject or to accept this error; hence, you are the arbiter of your own fate, and sin is the author of sin.

I have this day heard a statement from Mrs. Plunket, to this effect: that she had recently called upon you; that she had found you sick, and unable to go on with your class; that you had invited her to return to the fold; and that she refused your invitation, because she could not agree with you about teaching. I did not credit her statements, and wish to know the facts, over your own signature, that I may be able to deny these, and all such insinuations.

The above letter is from a worthy Christian Scientist, a gentleman of good standing in the commuuity, whose acquaintances value his word,—one who spurns gossip, and prefers to speak well of everybody.

The woman referred to did call on me, about the first of September, and sent up my servant with her card and a bouquet of flowers. I was in good health and spirits; and the entire substance of my conversation with her was a calm and kind rebuke of any false position taken in the name of Christian Science. The substance of her talk was a timid attempt to raise herself in my estimation. After she had left me, I remarked to my clerk: "This call was made for the purpose of subsequently misrepresenting what I had said, and you ought to have heard our conversation."

Mrs. Mary H. Plunket's report of our interview, as stated in the above letter, is an utter falsehood throughout. Nothing of the kind was said. It is not probable that I should ask a person to assist me in teaching Christian Science whom I regarded as too unsafe to be received into my Normal Class. Past experience had taught me her character; and I regret to add, that on the evening of her call I saw no improvement in her motives and aims.

She is reported as saying that she paid "three hundred dollars for her tuition at the Massachusetts Metaphysical College, and that I then required two hundred dollars more to grant her a certificate, which she refused to pay." These are the facts relative to our business transactions: When she entered the Primary Course she claimed not to have the money to pay for her tuition, and asked me to take some jewelry as part payment. I declined; but discounted one-third on her tuition, and she paid me just two-hundred dollars. The only money I ever receive for certificates is twenty-five cents on each annually renewed certificate. I gave her no certificate, solely because she did not improve the opportunity she had in the class of receiving my instructions; and because I learned, with sad surprise, that only God's hand and lessons could so change her motives and morals as to make her receptive of Christian Science. My autumn term was referred to in our conversation; but I simply told her the Primary Class was postponed, to accommodate some members of the bar, who wished to enter my college, but were obliged also to attend the September term of court.

There are sometimes to be met certain adepts who compel honest people to besmirch their own pens, and to spend their time in correcting injurious falsehoods. If you converse with these masqueraders, however cautiously and kindly, they are sure to go away and belie you, and repeat (professedly) what they want people to think that you have said. This retards the cause of Christian Science. How shall we treat such defamers? If we refuse to meet them, we lose a possible chance of doing good to this class of creatures. Even if we do not grant them interviews, they will improve other chances to do us evil. Charity receives many blows; but uncharitableness in ourselves is more to be feared than the blows. 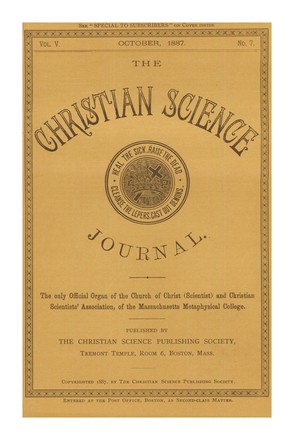 THE NON-EXISTENCE OF SIN

THE WANDERINGS OF ABRAHAM

THE PILLAR OF THE CLOUD

You say, "Toil fatigues me."

THE PROEM OF JOHN'S GOSPEL

JESUS' RELATION TO THE LAW

LIGHT IN THE HOUSEHOLD