While studying abroad in Tibet, I struggled with what seemed to be a very oppressive atmosphere. People’s Liberation Army troops were stationed everywhere we traveled, and I was contending with a lot of negative thoughts regarding the government.

Within a few days of arriving in China, I had developed an uncomfortable rash underneath one of my arms. The following day, we were to begin our journey from Beijing to the autonomous region of Tibet, which included a plane ride as well as a 24-hour train ride. I felt afraid at the thought of dealing with this irritation during such extensive travel.

I prayerfully addressed the belief that there could be any sort of government opposed to God, good.

However, throughout my life I’ve been healed of countless challenges through Christian Science. So it was natural to address this issue through prayer and to enlist a Christian Science practitioner to pray with me. I was able to send the practitioner an email before I went to bed, and then I fell asleep trusting that our prayers were effective. In the middle of the night, I woke up only long enough to hear a very clear, firm message resound in my thoughts: “Matter has no power.” I immediately understood that the rash had absolutely no power over me since God is all-power. I was able to have a restful sleep and begin my journey to Tibet the next day. It wasn’t until the following day that I realized that the rash had completely disappeared, and I was so grateful for such a quick healing.

I spent the majority of my time in Tibet touring monasteries throughout the country—many of which happened to be located at very high altitudes. One particular day, I was having such a hard time breathing that I was unable to walk a few steps without experiencing severe shortness of breath, and I had to excuse myself from the tour.

For the rest of the day, I prayerfully addressed the belief that there could be any sort of government opposed to God, good. I saw that, in reality, I could not experience the unjust so-called effects of material beliefs about altitude, and neither could the people of Tibet be shackled by a repressive regime.

The biggest take-away from my study abroad was a deeper understanding of what it means to be free.

The following morning, my group had a metaphysical meeting to share spiritual inspiration in preparation for the day. One individual mentioned an article that discussed the permanence of health as a quality of God. I realized that this fact must be true for me, too, because health, which is derived from God and completely spiritual, has nothing to do with a location on the globe. All the fear I’d been feeling about the altitude disappeared immediately, and I knew I’d been healed. I was able to participate in all of the activities that day, which included climbing several hundred steps through the Drak Yerpa meditation caves—at an altitude that was actually 1,000 feet higher than the previous day! I was able to enjoy the rest of the trip without any altitude-related difficulties. And later, as a mountaineering counselor at a camp in Colorado, I was able to help others find freedom from altitude sickness when we were summiting various 14,000-foot-high mountains—further proof that this healing in Tibet really was permanent.

The biggest take-away from my study abroad, though, was a deeper understanding of what it means to be free—that freedom, like health, is a spiritual quality of God and has nothing to do with location or circumstances. It is permanent and universal, and we can bear witness to this fact in prayer. I have found much comfort in the following passage from Isaiah: “Of the increase of his government and peace there shall be no end” (9:7). Instead of feeling animosity toward another country’s government, I was able to gain a greater trust that God’s government truly is in operation everywhere. 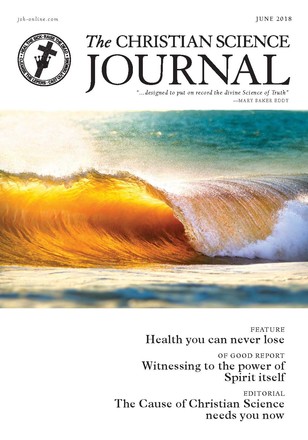 Why should a person diagnosed as having an incurable disease read a Christian Science magazine?

Health you can never lose

Governed by genes or by God’s Word?

The humble art of meekness

Am I good enough to be healed?

The necessity of loving yourself

A healing moment of divine consciousness

the lion will lie down with the lamb

Quick recovery after a fall

Witnessing to the power of Spirit itself

After fifty years, a homecoming

Healings during a study abroad