Christian Science was introduced to our family when I was in my early teens. My first healing through my own prayer was of impaired eyesight. That was fifty years ago, and it has remained permanent. Since that time I have received many other healings, and all of them have strengthened my trust in God's care of His creation.

Although freedom has sometimes come instantaneously, a stomach disorder persisted for thirty years despite my continued success in other areas requiring healing. One by one I eliminated certain foods from my normal diet to alleviate the suffering. It got to the point where there were only a few things I could eat without discomfort. Secure in the faith that Christian Science, understood, meets every emergency, I was never tempted to seek a medical diagnosis. At various times I requested the help of Christian Science practitioners. This brought temporary relief, but there was not a permanent healing.

My primary need was to get rid of fear. But how did one go about overcoming fear when it seemed so real and such a part of one's consciousness? Many nights, wakened by the fear that I was about to pass on, I would repeat John's comforting words (I John 4: 18), "There is no fear in love; but perfect love casteth out fear." This quieted my thought so that I could go back to sleep. But a deeper meaning of these powerful words eluded me until some time later.

When I was elected to the position of Second Reader in a large branch Church of Christ, Scientist, I hesitated to accept. I was afraid that an attack of indigestion such as I was experiencing regularly might cause me to collapse. Immediately this suggestion was arrested by the knowledge that I could take this step according to my highest sense of right, confident that God would support me in the activity all the way. Although the symptoms persisted, I was able to read at two services every Sunday morning with joy. I never missed a service except for the usual vacation periods. Surely, I thought, I will be healed as a result of these three years of consecrated study and service. But at the end of my term as Reader, there seemed to be no improvement physically, although I could see much growth had taken place spiritually.

Several months later, as I was studying from our beloved books, the Holy Bible and the writings of our revered Leader, Mary Baker Eddy, I read this statement in Science and Health with Key to the Scriptures (p. 390), "It is our ignorance of God, the divine Principle, which produces apparent discord, and the right understanding of Him restores harmony." I had read this sentence many times before, but now it stood out boldly. I knew I did not want to be ignorant on any subject, especially God. If this "apparent discord" was from my "ignorance of God," I realized, then I needed to dig even deeper for a better understanding of Him. I asked myself, "How can I possibly know what I truly am if I don't know what God is, for man is God's reflection?"

Turning to the synonyms for God, which Mrs. Eddy gives us in the Glossary of Science and Health (see p. 587), I started with Mind. I reasoned that because God is the only Mind, and this Mind is wholly good, spiritual man knows only good. Therefore, since fear does not emanate from God and so is unreal, it was not possible for me, in my true being as God's reflection, to be fearful. Fear, then, was not my thinking but an argument of aggressive mental suggestion that I had been accepting as my thinking—a false belief that something foreign to God could enter consciousness to control me. Impossible! Fear is not something; it is nothing—a lying argument that has never been a part of anyone's real selfhood. With this awareness the tears rolled down my cheeks. I was experiencing a long sought freedom—the freedom from fear.

But, like Jacob, I did not let go of this angel until its fuller blessing was felt (see Gen. 32:24-30). Next I took another synonym for God: Love. The statement from I John that had sustained me in times of intense fear now opened a new meaning. I could see that "perfect love casteth out fear" by its very nature of filling all space. There is no space where fear can exist or operate, since Love, God, fills all space.

From this point I considered God as Life. Now I could see clearly that I could not really lose my life because it was a reflection of the divine Life. My job was to express that Life, and this activity was joyous, effortless, and everlasting.

Within the week I was completely healed. That was seventeen years ago, and from that time on I have been able to eat anything without discomfort.

This inspired vision of God's allness and the consequent freedom from fear have opened new avenues of expression for me. My gratitude is unbounded for Mrs. Eddy, who shared with us her glorious discovery of the rules underlying the healings performed by Christ Jesus, our Way-shower. I am also grateful for every activity provided for by Mrs. Eddy in the Manual of The Mother Church to advance our individual and collective spiritual growth. 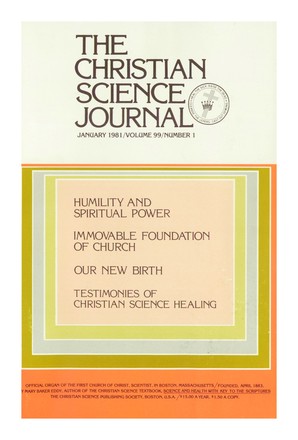 Your part in the ongoing revolution

The world, the Monitor, and you

Unity of reflection and demonstration

A spiritual impetus for solo singing

By THE CHRISTIAN SCIENCE BOARD OF DIRECTORS | January 1981