One of the outstanding characteristics of Christian Science is its consistency—in metaphysical teachings, method of practice, and ethical standard. This consistency rests on unqualified acceptance of the omnipotence and goodness of God, divine Principle, as the only creator and source of man's being.

To illustrate: If we start with the foundational truth that God, the creator of all that exists, is infinite Mind, this leads in Science to the logical conclusion that all that really is created is Mind's manifestation, and hence divinely mental. And from the basic fact that the all-creating God is Spirit, not matter, flows the conclusion that all is in reality spiritual, not material.

The further conclusion becomes inescapable that the physical senses and material mentality of mortals, being wholly unlike God and not created by Him, testify fraudulently. Their supposed evidence, called matter and material life, together with all discord, suffering, disease, and death, must be a self-deceiving illusion—a subjective dream-state having neither basis, substance, nor actual existence.

It follows, then, that disease is, in the most profound sense, mortally mental—a tortured dream manifested on the body and arising from the fear, ignorance, or sinfulness of mortal thought—and that the remedy is wholly mental and, indeed, spiritual and divine.

In other words, what mortals call a physical disease-process is made up solely of negative, discordant, destructive thought-action of what the Apostle Paul called "the carnal mind [that] is enmity against God,"Rom. 8:7. and what Christ Jesus described as "a liar, and the father of it."John 8:44.

Clearly, the remedy lies in reversing such pseudo-mental action, through the saving truth of God's nature as pure Love and the consciousness of man's real status as God's reflection.

The whole picture of physical causes and effects needs to be replaced with the recognition that God, Life, Love, is the only real cause, and that His manifestation, spiritual man—characterized by harmony, perfection, and indestructbility—is the effect.

These foundational truths govern with consistency the practice of Christian Science healing, both its method and its ethics. Fundamental to this practice is that God is the only power and that His action, manifested in the ever-present Christ, is the only healer; hence, the method of healing consists of earnest Christian prayer to bring human consciousness into accord with God. This destroys mortal illusions that would misrepresent God and defile man.

In the Christian Science textbook, Science and Health with Key to the Scriptures, Mary Baker Eddy provides a simple illustration of the discord-producing action of mortal thought uncontrolled by spiritual understanding. She observes, "A new name for an ailment affects people like a Parisian name for a novel garment. Every one hastens to get it. A minutely described disease costs many a man his earthly days of comfort."Science and Health, p. 197.

Later on in the book, but following through with what the above implies, she gives this counsel to students of Christian Science praying to heal others of disease: "You may call the disease by name when you mentally deny it; but by naming it audibly, you are liable under some circumstances to impress it upon the thought."Ibid, p. 412. In a number of places she makes clear that giving names to diseases tends to increase the patient's fear. And fear, Science explains, is the foundation of disease.

All this has special applicability in our present era, when new diseases are being continually brought to public notice, sometimes with saturation billing comparable to that given new football heroes. Since disease arises from fear and associated mental causes, it is a serious question whether the common practice of giving impressive-sounding names to new maladies, and offering "minutely described" explanations of symptoms and disease-processes, is a health-promoting or a disease-giving practice.

Science and Health provides further instruction on the handling, through metaphysical treatment, of disease and of the fear engendered by disease-names, when our Leader writes, "To heal by argument, find the type of the ailment, get its name, and array your mental plea against the physical."

The rest of the paragraph indicates what this involves: "Argue at first mentally, not audibly, that the patient has no disease, and conform the argument so as to destroy the evidence of disease. Mentally insist that harmony is the fact, and that sickness is a temporal dream. Realize the presence of health and the fact of harmonious being, until the body corresponds with the normal conditions of health and harmony."Ibid.

Sometimes, however, Mrs. Eddy's statement about calling disease by name, quoted above, is taken from its context, and then the question is asked, "But what if neither I nor the patient knows the name of the ailment? Is a medical diagnosis desirable to help in making the metaphysical treatment specific?"

Consistency tells us the answer is no. Christian Science treatment deals wholly with those mortally mental elements that constitute disease. This would include denying whatever beliefs or fears the patient may be harboring about the name or nature of the trouble. It would require nullifying, with Truth, any apprehensions stirred by whatever disease-name might suggest itself to the patient. It would also call for refuting with Truth any disease-images held in thought, as well as the tendency of the human mind toward docile acceptance of so-called physical causation.

Speaking of the example set by the master healer, Christ Jesus, Mrs. Eddy writes, "Physical causation was put aside from first to last by this original man, Jesus. He knew that the divine Principle, Love, creates and governs all that is real."Ibid, p. 286.

In line with this, a physical diagnosis, focusing on symptoms and a more-or-less "minutely described" disease-process, would only divert attention from what really needs to be corrected. It would tend to intensify fear. As the Christian Science textbook states, "A physical diagnosis of disease—since mortal mind must be the cause of disease—tends to induce disease."Ibid, p. 370.

What is needed in Christian Science practice is not a physical diagnosis but an intuitive spiritual perception of the patient's mental state that will make clear what needs to be met and overcome. A metaphysical appraisal of the situation, prompted by love for the patient and gained through spiritual discernment and divine Mind's guidance, goes to the source of the difficulty. The truths of Science, understood and directly applied to the situation, correct the beliefs involved and produce healing. Thus relying on changeless Truth, the Christian Scientist unites with the order and harmony of God's government. Through spiritual understanding he realizes the consistency of the scientific action of divine Mind, omnipotent Principle. He yields up fears and disease-beliefs in a deep Christianization and spiritualization of thought and worship, and the result is physical healing.

A friend's experience illustrates this. He traveled on assignment to an extremely troubled area of a distant continent, where conflicts were sharp and hatreds inflamed. One night after arriving there, just before he was to leave on a very dangerous field trip, he became violently ill with abdominal pains. Unable to meet the situation himself and in extreme emergency, he finally telephoned a practitioner in the United States.

There had been no medical diagnosis to determine whether the trouble would have been termed appendicitis, fever, food poisoning, or some other medically named malady. No such physical diagnosis was needed. The practitioner, who was alert to the surrounding circumstances, quickly sensed the need and dealt with it. She vigorously responded, in essence, "There is but one infinite Mind, and you are in the presence of that Mind. You are not embroiled in a situation where there is mental strain and turmoil and many mortal mentalities warring with each other. You will have your healing." Following the telephone conversation she prayed to understand his God-given immunity from hate, strain, and mental turmoil. A couple of hours later, as dawn came, my friend was completely free of the malady and able to go about his business.

Consistency in Christian Science excludes the mixing of physical means and spiritual means for healing. Correspondingly, it excludes reliance on diagnostic procedures that are opposite in their assessment of the nature of the trouble and in their prescription of what's needed to put it right.

As indicated above, it is wise to take into account the full context of Mrs. Eddy's statements, and to consider all that she says on a given subject. The instruction—"find the type of the ailment, get its name"—is in the context of a whole chapter that makes clear the nature of disease as belief, and the purely mental and spiritual nature of Christian Science diagnosis and treatment.

Everything in this chapter, and elsewhere in the textbook and her other writings, dealing with the names of diseases is relevant, and so are passages dealing with diagnosis. Exploration of these, and related topics, using the Concordance, helps to clarify such questions as those considered here, and to guide the student rightly. Thus the consistency of Christian Science is observed in its practice. And this consistency is essential to Truth-healing. 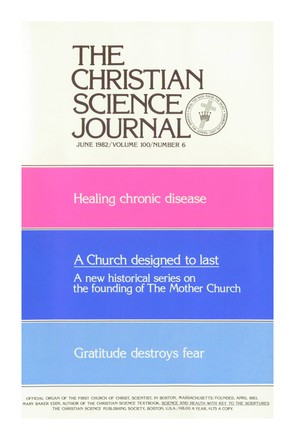 The role of expectancy in Christian Science treatment

error is a balloon

The stability of reality

"The pinnacle of praise"

The background of The Mother Church

Waking our world to Christian Science