Finlayson a model for peacekeeping

I was at first disturbed and then inspired by a comment of Ian R. Finlayson in his article "What a soldier can do" in the June Journal, [p. 8]. He said, "Someone who is a soldier for reasons other than aiding and advancing humanity is in the wrong profession." I could not imagine how this would work in face-to-face combat with a so-called enemy. ...

Wouldn't it be wonderful if that point of view could be communicated to military academies and armed forces in other nations where one is indoctrinated into thinking that war is the answer and nonviolence and its efficacy are not part of the curriculum; even to take it further and change the war-based history curriculum to include the history of nonviolent direct action and alter the habit of thinking of war as the only alternative.

Soldiers who are encouraged to aid and advance humanity are so needed today to be a model for peacekeeping forces. How blessed Finlayson is to be in a leadership position that can move us in that direction. To me, that is what a soldier can do.

Unifying force of the Seder

I had never heard of the Seder until the bombing last year of a Seder dinner in Israel. This year, a Jewish couple invited me to join them, their family, and their friends at their Seder celebration. I was very pleased to share with them that I had read the article about the Seder in the Journal [April, pp. 37-40]. The article added to the sense of respect and appreciation that my friends and I have for each other's beliefs and the common ground of our faiths.

All ages helped by children's article

I want to express my thanks for Tyler Mehlenbacher's article, "When a gopher bit my finger," in the May Journal [pp. 36-37]. While it's labeled as an article "For Kids," it spoke to me clearly.

One night recently, my wife and I saw a flying insect in our kitchen, and thinking it was harmless, I picked it up in my cupped hands and began to take it outside. I suddenly felt a stinging sensation coming from within my cupped hands, and upon releasing the insect, I learned that it had been a hornet.

I immediately decided this insect was, in fact, harmless, despite what would appear otherwise. I remembered the article I read just that morning by a boy who was trying to do a good deed—just as I had been trying to release the insect. He knew he couldn't be harmed for doing good, and I knew this had to be the case for me as well. Since I had just seen this fact demonstrated in the article I read earlier that morning, it seemed such an easy thing to understand. ...

There was no mark, swelling, or pain following this incident, just a deep lesson learned about God's constant care for me and all of His creatures. Thank you for this fantastic article that has proved to be so helpful.

More about Scotland and Presbyterianism

Some correction or clarification is needed with regard to the article on the Presbyterian Church in the April Journal [p. 45], as there are two references to "the throne" which could give readers the impression that both refer to the throne of England. The first reference clearly does, and is correct, stating that Catholic Queen Mary "took the throne [after Edward VI] in 1553." But then we are told that "a new Catholic monarch, Mary Queen of Scots, took the throne in 1561." That was in fact the Scottish throne, quite distinct from the English one, as the English and Scottish thrones were not united until 1603, when James VI of Scotland also succeeded to the English throne as James I of England.

All letters to the editor (see addresses on the right) will be considered submissions for publication unless you request otherwise, and are subject to editing for length and clarity. Opinions expressed in this column are not necessarily those of The Christian Science Journal.

It should also be pointed out that Mary Queen of Scots did not actually "take" the throne of Scotland in 1561, as she had been the queen of Scotland since 1542, When her father James V was killed, leaving her queen when just one week old. At the age of six she was affianced to the eldest son of Henry II of France, spending the next 13 years in France, marrying him in 1558 and becoming Queen of France when he ascended the French throne in 1559. It was after the death in 1560 of both her husband and her mother, who had been regent/acting for her in Scotland, that she returned to Scotland in August 1561 to take up her royal responsibilities there—but the throne had been hers since 1542. She abdicated, as the article stated, in 1567, because, owing to pressure from John Knox and other pro-Protestant reformers, the tide had turned against Catholicism in Scotland, and she was no longer welcome there.

The cover photograph "Creation Captured" in the May Journal spoke to the insights I had recently had in prayer. Two mornings in a row, I felt the sense of being at the "morning of creation" and realized that creation wasn't a one-time thing—either the "big bang" or the Biblical record. It's a constant genesis, sunrise, swelling of the sea, unfolding of the galaxies. The material is only symbolic to express the ineffable, but [it] gives impetus to higher thinking and action. The power of the breaking wave and the brilliance of orange, aflame with light, addressed that developing insight for me. 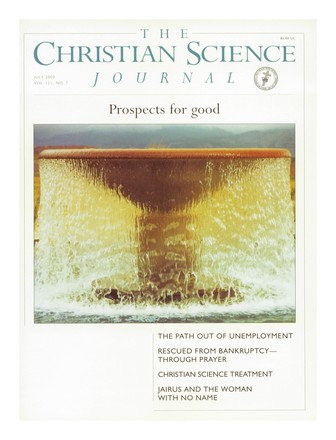 The path out of unemployment

What makes streams break out in the desert?

A Bible-based view of wealth

How I prayed when the bank failed

How I prayed about red tape

We were rescued from bankruptcy—through prayer

What I would tell my patients if...

Uninjured when jeep turns over

By Jeffrey Hildner with contributions from Judith Woyka | July 2003

Getting to the heart of healing