Again and again prayerful reliance on God in the light of the teachings of Christian Science has brought healing quickly and permanently. Sometimes, however, a devoted follower of Christ Jesus' teachings may struggle for months seeking healing for a particular problem that has not yielded to prayer. The question arises, "What more can be done to prove God's healing power?"

The answer may lie in deepening our capacity to "worship the Father in spirit and in truth," John 4:23. as Jesus put it. This involves making fresh discoveries of God's incorporeal nature as infinite Spirit and His perfection as almighty Truth. It leads us to an enlarged awareness of man's actual spirituality as God's exact expression, indestructible, whole, and complete. Expanding our spiritual understanding of God and man in this way leads to God-given dominion over all that appears to be material.

Perhaps the difficulty is that we are continuing to look for life, health, and happiness in matter instead of developing the conviction of man's present spirituality within God's allness. Instead of hanging on to the popular viewpoint that life is material and limited, subject to sickness and discord of all kinds, and trying to change poor matter into better matter, let us stand firmly and joyfully with the enlightened understanding of man's perfect, immortal individuality, completely outside of matter.

All of us can gain this higher, scientific viewpoint that inevitably brings healing. To do this it may prove helpful to study the Bible anew with a childlike, listening thought. Persist in realizing that man's true, spiritual being is a demonstrable fact. Jesus understood that man has his origin in God. Therefore he was sure of man's present spirituality. This understanding of man's oneness with and likeness to God was the foundation of his remarkable healing works. His resurrection showed the indestructible nature of the Christ-man.

After the Master's resurrection some of his followers were still so steeped in their conviction of materiality as the basis of life that they failed to grasp the spiritual significance of his works. Mary, however, the first to see the Master after the resurrection, discerned the pure, unblemished spiritual manhood Jesus was demonstrating. Speaking of the faithfulness of Mary's spiritual viewpoint and the materiality of Jesus' enemies, Mary Baker Eddy, the Discoverer and Founder of Christian Science, writes in Science and Health with Key to the Scriptures, "This materialism lost sight of the true Jesus; but the faithful Mary saw him, and he presented to her, more than ever before, the true idea of Life and substance." Science and Health, p. 314.

A deeper appreciation of the spiritual convictions underlying the Master's life-work will help us develop similar convictions of our own present spirituality. It will help us to identify ourselves with the Christ, "the true idea of Life and substance," which brings healing.

Jesus' conviction of his full spirituality was disclosed in his teachings, in magnificent healing works, redeeming mankind from the various limitations of materiality. He showed disdain for the claim that matter has power by silencing storms, walking the waves, healing the hopelessly sick, and raising the dead. All these actions showed the spiritual altitude of his thought and his refusal to be impressed by matter's assumed laws.

Though unworldly, he transformed the world. His allegiance to God and his oneness with infinite Truth gave him mastery over his surroundings. He proved God's all-power and man's limitless substantiality as a spiritual idea representing God alone. Instead of despairing in the face of some supposed material threat to his life, he calmly moved forward, confident of God's control and of man's spirituality, which exempts him from all the discords of physical existence.

In the synagogue one day, Jesus read to the people from the book of Isaiah. After he read the passage prophesying the coming of the Christ, a prophecy fulfilled in his own experience, he began to rebuke their lack of receptivity. Then the people became angry. They grabbed hold of him, pulled him out of the synagogue, led him through town to the brow of a hill where they planned to throw him off. The hatred of material thought resisting the Christ, Truth, was so great that momentarily he seemed captive of the materialists around him. But the Bible tells us, "He passing through the midst of them went his way." Luke 4:30. It's clear that Jesus must not have relinquished his spiritual altitude of thought even for a moment. He was continually bearing witness to God, insisting upon and demonstrating God's allness and power, delivering others, delivering himself. The power of his Christly confidence was realized at the brow of the hill to which the people took him, and he was delivered.

Sometimes a discouraging and frightening physical condition will lead us to the brow of a hill of material extremity, from which it looks as though we are to be cast down. However, there at that supposed precipice of materiality, we too can pass through the midst of the material beliefs around us. We can acknowledge our spirituality, claim our dominion and healing, and go our way—go Christ's way—rejoicing.

Some years ago I suffered from a severe and painful physical disorder. I prayed faithfully and was aided by the prayers of a consecrated Christian Science practitioner. But the problem persisted for many months. Its severity increased to the point where it was difficult for me to walk or stand.

At one time during this experience I was tempted to get medical advice. Among my military co-workers were several physicians. The temptation was to ask one of my medical friends for his opinion as to the nature of the difficulty. However, I refused to yield to such a temptation because I could discern that it would be impossible for medical diagnosis to give me any information about a perfect, spiritual idea of God. And I was determined that I was not going to rummage around in the rubble of materiality to look for man's true being. It was clear to me that the only right way to find and prove my Christ-manhood was to gain a better understanding of God and to develop a more solid conviction of man's indestructible spirituality.

Searching for divine enlightenment, I was inspired to review Jesus' life of healing, his vital spirituality, his steadfast allegiance to God, and his ability to overcome all obstacles. One evening my study of the Bible took me to Psalm 139. It reads in part: "Whither shall I go from thy spirit? or whither shall I flee from thy presence? . . . If I take the wings of the morning, and dwell in the uttermost parts of the sea; even there shall thy hand lead me, and thy right hand shall hold me." Ps. 139:7,9, 10. Suddenly I became convinced that no matter what happened to me materially, I could never be separated from God. I was in fact a spiritual idea of God and could never be destroyed. I could discern that this spiritual conviction of life in God, dropping all faith in the so-called life of matter, was a law of restoration to the physical body—a law of healing. Although there was no immediate physical change, I knew I was healed.

The physical malady continued sporadically for about two more months; but consciousness, liberated by God's power, was developing a better sense of identity, or body. A reference I found helpful in this regard is from Science and Health: "Consciousness constructs a better body when faith in matter has been conquered. Correct material belief by spiritual understanding, and Spirit will form you anew. You will never fear again except to offend God, and you will never believe that heart or any portion of the body can destroy you." Science and Health, p. 425.

I continued to move forward, undaunted and joyful in the conviction of healing. Before long, all trace of the difficulty disappeared, never to return. From that time to the present I have participated normally and vigorously in various sports—tennis, swimming, hiking, and jogging—without the slightest difficulty.

It became clear from this healing that fear and concern for what might happen to a material selfhood had to be set aside. When the power of God's ever-presence was brought to light, materiality was shown to be unreal. The difficulty was mastered by the power of Christ, Truth, transforming human consciousness.

In addition to the healing itself I felt a deeper devotion to more fully appreciate and understand how the healings of the master Christian transformed consciousness from a material to a spiritual foundation. Jesus discerned that the control of God's all-power reached to every phase of life, subjugating matter. He could say with impunity, "Destroy this temple, and in three days I will raise it up" John 2:19. and "He that cometh from heaven is above all." John 3:31.

The God-given, spiritual identity that Jesus lived and taught is the Christ, the divine idea of perfect spirituality. This is the true nature of each one of us. However, the divine influence of the Christ seems hidden so long as we base our lives and expectations on the limitations of materiality. Christ's liberating action comes to light to the degree that we reason from the standpoint of man as truly the expression of Spirit's allness and of Mind's goodness, ever-presence, and all-power. What a healing animus develops when we reason with certainty that God is Spirit, and man is spiritual; that God is Life, and man is immortal; that God is Love, and man is selfless and loving; that God is Truth, and man is perfect, limitless. We can insist that God—Mind, Spirit, Principle, Truth, Love, Soul, Life—is an irresistible law of good displacing any and every claim of mortality. Finally, there follows the glorious realization that the inseparability of God and His idea, spiritual man, constitutes a law of healing and regeneration to the specific human need. Satisfied and serene in these convictions, we can be confident that God is doing His holy work.

Relinquishing concern for and dependence on materiality, we can become convinced of the present actuality of the spiritual man. We can prove progressively, through redemption and healing, "the true idea of Life and substance." Such developing spirituality will bring us health, vigor, and vitality—the kingdom of heaven within. 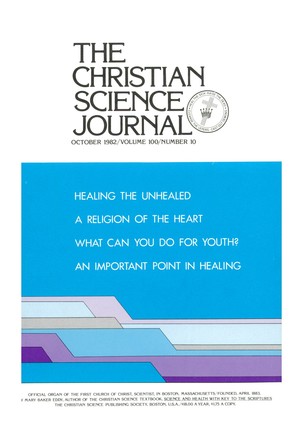 What can you do for youth?

The law of Life in action

"Chemicalization"— what is it?

Under the splendor of the sun

Alive and dead in the right way