When Christian Science found me many years ago, I was a young mum caring for two small children on my own, and with a divorce pending. I had also been struggling with a persistent, long-standing skin disorder on my upper arms and body, for which I applied ointments and bandages every night before retiring. I was also using prescribed drugs with little or no results.

One evening after the children had gone to bed, I was sitting alone in the dark feeling very sorry for myself. It was then that I cried out in desperation to God, “I cannot do this any longer on my own. Please show me what I need to do and know.” Very quickly came an answer, which seemed to fill the room: “Physician, heal thyself.”

At that time I did not know that this passage was from the Bible (see Luke 4:23), but I reasoned, “The only religion I know that teaches us how to be our own physician is Christian Science.” I had, as a young person, occasionally attended a Christian Science Sunday School when my mother attended the church service, and I had experienced several healings through prayer. But I had drifted away from the teachings of Christian Science over the years.

Now, like a thirsty person in the desert, I went to find my copy of Science and Health with Key to the Scriptures by Mary Baker Eddy where it was stored away in a cupboard. I dusted it off and, with new hope, started to read the first chapter, on prayer.

I must have fallen asleep, for I dreamt I was running towards a huge rock, on which the word TRUTH was written. When I awoke, my arms were in the air, and tears were pouring down my cheeks. I felt as if I was seeing two pictures of existence: One was foggy, while the other one was to me the atmosphere of Spirit, clear and beautiful. I knew I had a choice—I could choose to believe the foggy, material version of myself, or the spiritual, clear, and beautiful one.

It was then that I noticed the bandages had fallen off, revealing fresh, new skin. It was as though I had awakened from a bad dream, and through later study in Christian Science, I realized that was all it had ever been—unreality appearing real.

I got my Bible and opened at Psalms 40:2: “He brought me up also out of an horrible pit, out of the miry clay, and set my feet upon a rock, and established my goings.” I no longer felt trapped. And I no longer took any of the medicines. This was a new beginning, and the healing has remained permanent.

On the Sunday when the children’s dad came to take them out, he told our son he was now going to a Christian Science branch church near where he lived, and he hoped we could all go as a family. It turns out on the exact evening of my healing, my husband had been sitting in his flat and had hit rock bottom. He never thought of God, and certainly was not a churchgoer. But, in desperation similar to mine, he had reached out asking God to help him. The words that came in answer to his plea were, “Christian Science.” He then remembered that as a child I had attended a healing church, a branch Church of Christ, Scientist.

He immediately got the telephone book and found the local branch church’s listing. Even though it was 11 o’clock at night, he rang the number. It just so happened that the clerk of the church was working late and, on hearing my husband’s tale of woe, he gave him the number of a local Christian Science practitioner. Despite the late hour, he rang her, and after he explained the situation, she agreed to help him through prayer. He only told her of our separation, never mentioning a drinking problem he was also struggling with. When he hung up, he went to finish his drink and was so repulsed by it that he nearly vomited. That was the last drink he ever took.

Not surprisingly, we all went to church the next Sunday. As I entered the auditorium, I felt that I was at home at last. My husband and I got back together, we enrolled the children in Sunday School, and shortly after, I joined both The Mother Church and a branch church. I have been actively working with my church family ever since.

What cannot our heavenly Father-Mother do? As the Bible says, “And God is able to make all grace abound toward you; that ye, always having all sufficiency in all things, may abound to every good work” (II Corinthians 9:8).

I am so grateful to God and to Christ Jesus, and to Mary Baker Eddy for discovering and sharing the Science of the Christ. It not only heals but reveals the truth of man’s being as forever at one with divine Life. 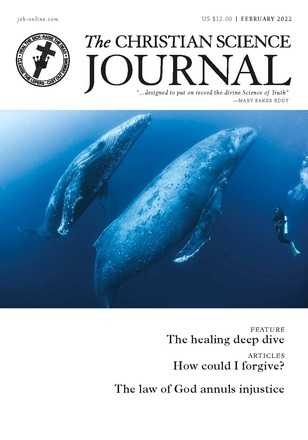 The power of persistence

How could I forgive?

The law of God annuls injustice

What is the body, and how can we heal it?

Healing of swelling and pain in breast

Motorcycle lessons and getting past ruts in the road

Give, and it shall be given you

By The Christian Science Board of Education | February 2022

Finding and fulfilling our calling— let God lead the way!