When circumstances call for it, one hires an attorney in order to be represented in an accurate and true light. In our day-to-day experience, we, too, want to be represented in a righteous way. We never want to be falsely represented, whether by gossip or a wrongful interpretation or mere human judgment. But isn’t this what a material view of ourselves does all the time? Age labels (old or young), illness, character faults, and inharmony of any kind are material misrepresentations of who we truly are as God’s offspring.

The textbook of Christian Science, Science and Health with Key to the Scriptures by Mary Baker Eddy, defines man as “the compound idea of infinite Spirit; the spiritual image and likeness of God; the full representation of Mind” (p. 591). We are each now and always an individual manifestation of the full representation of the divine Mind, God. We can lean on this fact, instead of feeling we need to be, or appear to be, a flawless human.

No challenge has the ability to reverse our true nature as expressions of divine Love.

When facing a challenge, we can defend ourselves by opening our thoughts to angels, which Science and Health says are “God’s thoughts passing to man; spiritual intuitions, pure and perfect; the inspiration of goodness, purity, and immortality, counteracting all evil, sensuality, and mortality” (p. 581). In prayer, we can let go of feeling a false responsibility to successfully represent ourselves and instead trust these angels to represent us to others as God sees us. No challenge has the ability to reverse the perfect representation of God that is our true nature as expressions of divine Love.

I learned to trust this when my husband and I renovated our “fixer-upper” home. Throughout the project, a neighbor voiced angry objections to all involved, focusing on our shared side lot boundary. County inspectors were called and determined there were no issues with that or any other setback—the required minimum distance between our house and the property’s boundaries.

After the renovation was complete, our builder had a new survey done, which revealed an error in the original survey. This resulted in our new front porch being just inches shy of the required front setback. We applied for a variance, and our neighbor asked other neighbors to object to it. As we prepared for the public hearing, our attorney told us the odds were stacked against us. Morally, she thought we should win, but she didn’t think we would. Denial of the variance would necessitate deconstructing our house, which would be financially prohibitive.

Our attorney was floored and asked, “Were you praying?”

I leaned on God with childlike trust to show us how we truly represent Him—as “representatives of Soul, not corporeal sense.” (This is from the definition of “children of Israel” found in the Glossary of Science and Health on page 583, delineating the spiritual meaning of this biblical phrase.) So, we are not representatives of human personality, mistakes, flaws, or challenges. We are the pure, perfect image of divine Love. I saw that divine Love could never be misrepresented, so neither could we.

My husband and I prayed daily, and divine Love showed us how to prepare for the hearing so that the facts would be presented in the best way possible. We worked to let go of a discordant, matter-based misperception of life, and to hold to our own and everyone’s identity as the perfect representation of Mind, Love.

Through listening to angel messages that came to us in prayer, the right people came to our aid, including many neighbors who didn’t even know us but were concerned about the injustice of the situation. False arguments that were intended to be used against us were uncovered and corrected.

Before the hearing, I experienced an aggressive illness. While praying for healing, I felt genuine compassion for our neighbor and glimpsed his true identity as a representative of God. I was impelled to write him a friendly email, telling him my husband and I harbored no hard feelings and hoped we could all move forward in peace. I had written him friendly emails before, but this was different. Instead of trying to humanly appease the anger that had been directed toward us, I felt the situation was completely under God’s control. The moment the letter was sent, the illness disappeared.

At the hearing the aggressive attacks continued, but through diligent prayer every untruth or attack that came up naturally dissolved. We were granted the variance by a unanimous vote of the county’s Board of Appeals, which they said was a first for them. After hearing the Board’s decision, our attorney was floored and asked, “Were you praying?” As I saw it, our true home, which is God’s indestructible, spiritual idea, had been evidenced in this practical protection of our house.

One day, a few weeks later, I began to feel unwell. I prayed to know that as God’s image, I could not be attacked by any suggestion claiming that I was not God’s representation. I took a stand mentally for the ability to do my work of helping others prayerfully without distraction or hindrance. When I clearly saw this as a God-given right, the symptoms left, proving their nothingness. Later, I found out that this happened the day our neighbor’s attorney was appealing the county’s decision. From my previous daily prayerful defense, I saw that the belief of evil had no power to grip me or our neighbor. I didn’t need to fear. The reconsideration was not granted, and my husband and I learned of some challenges our neighbor faced that made us feel compassion for him.

The steps of a good man are ordered
by the Lord: and he delighteth in his way.
Though he fall, he shall not be utterly
cast down: for the Lord upholdeth him
with his hand. 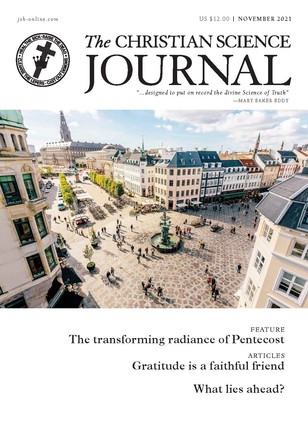 The transforming radiance of Pentecost

Gratitude is a faithful friend

Brush off the dust!

Finding the blessing in marriage

God’s help in an organizational crisis

where other than here?