What thoughts come to you when you think of the word leader? I find that most people think of power, authority, and control. Considering the events of the 20th century, the word often resonates negatively, as some national leaders have been harsh tyrants. The names of leaders of terrorist organizations are in the headlines daily. Some Pied Piper religious figures have led their congregations into acts of self-destruction. So the word leader has fallen on hard times.

One can feel the void this leaves. There is a strong, yearning today for real leadership—leadership that includes vision, responsibility, and power. Leadership on the world scene. Leadership in business. Leadership in religion. Leadership in government. Yet that yearning appears to hit a barrier of fear—fear that a leader will abuse the power that he or she has. There is a yin-and-yang conflict between the desire for better leadership and fear of what it might lead to.

How can we redeem a right sense of leadership? First, we should divorce the idea of leadership from the idea of ambition. The age-old strife over who shall be greatest is at war with true leadership. Leadership is effective only when it is selfless. Jesus' disciples, for example, frequently jockeyed for power and preference. Yet Jesus humbly washed their feet and asked them if they understood the difference between their ambition and his service. Earlier he had said: "For who is greater—the one who sits at table or the servant who waits on him? Surely the one who sits at table. Yet here I am among you like a servant." Luke 22:27 (NEB).

A leader, by definition, is one who goes first, someone who is willing to go ahead. This requires vision. It's supported by conviction. Now, conviction can be a loaded word, so to have its positive value, it needs to be separated from willfulness. Willfulness is self-oriented; it leads to the tyranny that many fear. Conviction based on foresightedness, and moral and ethical clarity, is positive. It provides a polar star that helps others find their way.

Jesus led this way. The great religious leader who discovered and founded Christian Science, Mary Baker Eddy, refers to Jesus as the Way-shower for humanity. People were drawn to him because of his healing works, but he resisted their adulation and pointed them to God, to his and their loving Father. He said, "I am not myself the source of the words I speak to you: it is the Father who dwells in me doing his own work."John 14:10 (NEB). When he felt his disciples understood this point sufficiently, he sent them out to heal. And they discovered that they were able to follow his example. As Mary Baker Eddy, herself a follower of Jesus, explained, "Jesus was 'the way;' that is, he marked the way for all men."  Science and Health, p. 46.

Jesus' spiritual vision, his conviction regarding God's good will toward men and women, was a guiding factor in his work—and when others caught this vision, they willingly followed. They didn't follow blindly, though; they knew from personal experience that he was a trustworthy guide.

Early in the book of Genesis, after accounting for the creation of man and woman in full accord with God, one reads that "there went up a mist from the earth." Gen. 2:6. Following this, is a flawed picture of men and women who are susceptible to temptation and disobedience. Moral confusion reigns, and lust and murder and unstifled ambition walk over the face of the earth.

In the New Testament, another "mist" rose to deflect Jesus from his way. But Jesus' conscious oneness with God, with the guiding Principle of all life, left him untouched by this onslaught. Self-aggrandizement had no appeal to him. He dined with the publicans, but the sensual opulence of their lives did not contaminate him. However, the moral force of his life could shake their comfort in materialism and steer their lives in a new direction. Any weakness on his part would have undermined his ability to lead. Even today books and movies attempt to carnalize his relationship with his devoted follower Mary Magdalene, for example, and in this sense would attempt to weaken the spiritual impact of his life. Yet, in fact, Jesus' ability to triumph over materialism and to deliver others from subjection to sin revealed a permanent, ever-operative Principle. And his life still leads one to this Principle that frees people from moral confusion and temptation.

Still another ingredient is needed if leadership is to be effective. Courage.

Not just the person, but the very office of leader appears to be a target of unceasing attack. Whether this office is called leader, president, prime minister, chairman, owner, CEO, board, bishop, superintendent, it is often faced with the onslaught of jealousy, hatred, slander.

It takes courage to stand up to this. Brute courage doesn't work here. The various leadership qualities mentioned above are the spiritual links that connect one to God, the divine power that fully defends one in this storm. Spiritual courage stands still—confidently with God. It takes action when needed, at God's direction.

Seeking the strong, stable, selfless elements of Christliness is a sure guide for good leadership.

Spiritual courage resists the temptation to return evil for evil. Instead it seeks Christ's guidance. Referring to the healing and saving power of Christ, Truth, so evident throughout Jesus' life, Mrs. Eddy wrote in a poem,

Thou gentle beam of living Love,
And deathless Life!
Truth infinite,—so far above
All mortal strife,

Or cruel creed, or earth-born taint:
Fill us today
With all thou art—be thou our saint,
Our stay, alway. Poems, p. 29.

It takes spiritual courage and humility to pray, "Fill us today/With all thou art" and then to trust that fully. Jesus expressed this trust in God, and triumphed over all evil by doing so. His followers are still learning to courageously trust this supreme power, as well. Yet to do so is essential to effective leadership.

Now it's one thing to talk about leadership this way in the abstract, but what about daily life? How do we know when it is safe to follow someone's leadership—in the PTA, at church, at work, or in local or national government? When addressing the conflicting passions that swirl around this very question and taking into account her own ongoing role as the Founder and Leader of her Church, Mary Baker Eddy wrote: "Competition in commerce, deceit in councils, dishonor in nations, dishonesty in trusts, begin with 'Who shall be greatest?' I again repeat, Follow your Leader, only so far as she follows Christ." Message to The Mother Church for 1902. p. 4. 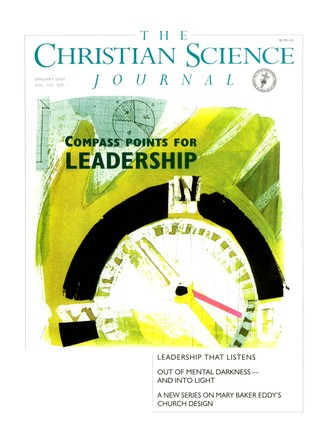 Good leadership: What does it take?

By Amy Brooke Baker with contributions from Marcia Youngman | January 2004

What we did when our leaders let us down

The test of leadership

Learning to lead by following Jesus

Science and Health—the book that launched a global movement

Spiritual healing: a conversation with Robert A. Johnson

By Jeffrey Hildner with contributions from Robert A. (Bob) Johnson | January 2004

Out of mental darkness—and into light

From fear to freedom

Why I entered the public practice of Christian healing

What do you find when you road trip through America's religious landscape?