Traveling around the UK recently, I’ve noted certain self-proclaimed Christian spokespeople standing in town centers preaching the gospel. While I salute their willingness to stand up in public as followers of Christ, my heart sinks as I hear many of them shout at passersby that they are sinners destined to end up in hell.

To me, that seems a far cry from how Christ Jesus went about touching the lives of those struggling with thoughts or actions less than the best, whether in relationship choices, business practices, or being prone to negative traits like self-indulgence and even corruption. The term sin no longer enjoys popular usage, and is at times dismissed as irrelevant, but it is a helpful term. It indicates anything that would separate us from God, and that’s how Jesus responded to it. He interacted with corrupt tax collectors and sinners wherever he discerned a heart inwardly turning toward good, despite protests from religious leaders who tended to focus on maintaining an outward appearance of good. In addressing their concerns, he pinpointed God’s tender care for those needing reform through two parables. He spoke of a shepherd leaving 99 sheep to find one that had strayed and a woman sweeping her home to locate a single lost coin (see Luke 15:1–10). Both the shepherd and the woman, Jesus said, rejoiced at finding what had been lost and urged others to rejoice with them.

These word-pictures Jesus painted of God’s saving love were not only reassuring to those straying, but also rebuked the hypocrisy, self-righteousness, and pride that excluded itself from others in a mistaken sense of moral purity. Such self-satisfied superiority was far from the religion Jesus taught and lived. He evidenced the love he preached by healing the sick and helping those struggling with sin to turn their lives around. And that same power of God can still transform us today and free us from thoughts and behavior that miss the mark of expressing the goodness inherent in us all as God’s children. As the Bible says, “The Lord your God is gracious and merciful, and will not turn away his face from you, if ye return unto him” (II Chronicles 30:9).

Our journey to freedom starts with better knowing God’s true nature. The Scriptures say of God: “Thou art of purer eyes than to behold evil, and canst not look on iniquity” (Habakkuk 1:13). This tells us not only what God is—pure, sinless Spirit—but also how God sees us—as His iniquity-free creation, the spiritual image of His perfect purity. This is the ultimate truth for all humanity, even though it might not seem that way watching the nightly news, nor feel like that in our own lives. Little by little we can understand and prove more of our spiritual nature if we’re willing to be reformed by what Jesus taught and by how it empowers us to break free of both sickness and sin. Explaining how Jesus healed men, women, and children, Mary Baker Eddy’s primary text on Christian Science, Science and Health with Key to the Scriptures, says: “Jesus beheld in Science the perfect man, who appeared to him where sinning mortal man appears to mortals” (pp. 476–477).

The thought Jesus held was the opposite of sinfulness, and this Christly thinking constitutes the true consciousness of us all as children of God, or reflections of divine Mind. This consciousness is the “perfect man” that Jesus beheld, which we can pray to see in ourselves. Clearly, that perfection doesn’t describe wrongdoing we might cling on to. But even in the midst of sin, if we sincerely yearn to be changed for the better, we can declare, in prayer, that we have a right to experience our God-reflecting freedom from sin.

Such a declaration is a powerful step toward our freedom to be more consistently governed by the natural impulses of good. But it’s not enough in itself. We also have to take a mental stand to procure our freedom from all that would claim to be an evil power or influence. In a letter to a young Christian Science practitioner, John Carroll Lathrop, Mrs. Eddy wrote: “Search out, dear one, your most obstinate belief and there pitch your battle.” The letter also describes the spiritual stand needed: “Watch and guard well and early and subdue finally all that is not good, of God …” (March 3, 1897; L02421, The Mary Baker Eddy Library; © The Mary Baker Eddy Collection).

We, too, can battle against any “obstinate belief” that would seem to define us, by noting and subduing thoughts not from the divine Mind. Mind is our true source of thinking, so even a seemingly tenacious thought that is not from God must be a lie. Ultimately, the very claim we are sinners is always a lie about our true being as God’s creation, as intimated in Science and Health, which says: “Does divine Love commit a fraud on humanity by making man inclined to sin, and then punishing him for it? Would any one call it wise and good to create the primitive, and then punish its derivative?”

The answer is no. The next paragraph reiterates the scriptural promise that God is “of purer eyes than to behold evil” and adds: “We sustain Truth, not by accepting, but by rejecting a lie” (pp. 356–357).

To me, this says we can increasingly reject the suggestion God knows us as sinners or creates us subject to sin. And we can instead declare to ourselves and become more conscious of our God-given independence from sinful thought and action.

No matter how modest these efforts might seem at times, standing for our truly sinless selves strengthens our resolve to refuse temptation when it arises. And leaning on Christ’s capacity to empower our understanding will bring increasing proof of that true nature, step by glorious step.

Every victory over sin is reason for rejoicing, whether over a minor, unseen vice, or over an overt and destructive habit. Yet more than that, each sin overcome is precious evidence for all humanity of the foundational premise of Christian Science, that we are God’s sons and daughters, made in the spiritual likeness of God—pure and perfect, sinless and free. 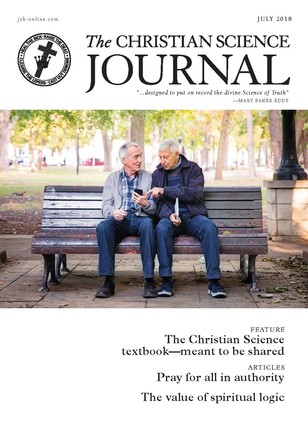