Mr. Seymour's timely article in the June number, we were glad to see. The book he speaks of guarantees to teach everything about healing, without the least assistance from reason, good sense, learning, or the trouble of study. By this contrivance, one may become proficient in the healing trade, just by dropping a few dollars into a box blindfolded. It appears right before him in the dark, like Hamlet's ghost.

No sensible person can deny the utility of such a system, in these days of labor-saving machines. There is no excuse why anyone should try to get along without such an outfit.

We hear that everybody is going into the business of healing. Why not, if we can become rich in wisdom and metaphysical lore, by just shutting our eyes? Opening the mouth, something drops into it, the very instant the gold eagles roll into the box; and this something is making us healthy, wealthy, and wise.

This idea the author referred to assures us he has been working at ever since he was a small boy. While he was leaning upon a hoe-handle in the field, and looking heavenward, it flashed upon his mind that sometime he should make some such achievement in authorship. Noble inspiration. Blessed be thou among men! How gratifying to one's vanity, to be thus honored by the gods!

Our author shows how we may get out of our senses in half a jiffy. In fact, this is the thing to do, in order to be healed.

Christian Science differs from him a trifle about this matter. To jump out of one's senses, as he insists, without letting any higher spiritual sense take the place, would make his dupes proper subjects for a madhouse.

There are many traces in this book of a bungler, who imposes upon the public a spurious article. The author makes mental healing about as plain as our view of each other in a country night, beneath a new moon.
A STUDENT.

My dear Teacher: Several letters from outside, referring to an article in the Post-Express,—purporting to be an interview with me in regard to Christian Science,—have shown me that I ought, last month, to have explained in the Journal, how that article came to appear in that paper.

After my experience with the reporter, I felt no justice could be expected from the Post-Express, and so decided to take no public notice of the matter; but to explain privately, to my patrons and friends here, the facts of the case, which I did effectually; but I did not consider, as I ought, the outside circulation; and certainly people abroad could only suppose that I gave the article as reported.

The truth was this: the reporters came here, and I declined to be interviewed at all, saying that I preferred my work should show what Christian Science could do. They asked how it came into existence. I said that it was the old Truth lost sight of; that it was the manner in which Jesus healed, discovered again, by Rev. Mary B. G. Eddy, of Boston, and that all was done through it that was claimed for it.

Finding they could get but little from me in regard to the healing I had myself done, they asked if I could not refer them to someone who would inform them of cures made; so I sent them to the family with whom I spent the winter. There they were told that much work had been done, and that many of the cures were wonderful.

About a week later, a reporter called again, and asked if I had not some pamphlets from which he could learn something of Christian Science, as he wished to write an article about it. I said that I could give him pamphlets containing Mrs. Eddy s own writings,—and would do so, if he would give his word that he would let me examine the article written before it was published, that I might know if it were correct. He promised faithfully to do this, and I gave him your two pamphlets: The People's Idea of God; and Mind-healing, a Historical Sketch; and also a Journal, and pamphlet by a student. The next thing I knew, that article came out, stating that I "talked freely, "and in an "exalted strain;" when really I had refused to say enough to enable him to write an article. Then he quoted what he pleased from the pamphlets furnished him, and gave them as my utterances, though I had said no such thing. He took those passages directly from the pamphlets.

Please publish this letter, that every person, into whose hands the Journal falls, may know that I never did so unchristian an act as to converse in the pompous style pictured in the Post-Express, or to take from your writings—or any others—thoughts and words, and give them as my own.
Lovingly your student,
SARAH A. PINE.

TRUTH ON THE PACIFIC COAST.

My dear Teacher: The malicious intent designed against us is uncovered on every hand. The contest appears to be a very uneven one, so few against a multitude. Trumpet-blowing calls together large classes, who desire Truth, but are misled by the bait of cheapness. Malpractioners claim to heal everything in a few treatments.

One man speaks for his brothers, when he declares a certain healer "charmingly divine."

I have not hesitated to state the facts as I know them; but this only seems to put us all the more on the defensive, as people want to be on the popular side, even if they are humbugged.

Mr. and Mrs. Lillie stand firm, doing good work, and are awake in regard to fraudulent claims.

There will be a demand for the right kind of teaching before long, and people will be willing to pay for it. The mental condition of those who have been dabbling in mortal mind-cure so long is really pitiful.

I have no compromise to make, nor will I turn hypocrite, even if I can not succeed honestly.

We do not intend to have our voice or work stopped, and you will hear from us again.

You have taught me an infallible Principle (not person, as is often asserted), and I never could be otherwise than grateful for the good you have done me.
Your loving student,
SUE ELLA BRADSHAW.
610 Van Ness Ave., San Francisco.

FEAR OF THE NEW.

Dear Journal: Why are people so afraid of anything new? Is there any reason for it in the philosophy of things?

Men hate to put on new boots. The old may be worn-out. Holes may let in the water and expose the sock. Yet the old shoe is an old friend. Be it ever so homely, it is easy to the foot. So it is with an old dressing-gown.

Perhaps ladies dread to don a spring bonnet or a new-fashioned garment; though this class of facts is not so well established to the masculine mind.

Jesting aside, there is a natural conservatism in human nature, which shows itself not less in Religion than in Medicine.

Creeds may be outworn, but still they are cherished. Many who do not believe them, tenaciously cling to them. The less men individually adhere to a doctrine, the more unwilling they often are to let it be taken out of the stated Articles of Faith. In a great convocation of Anglican Churchmen, where the Athanasian Creed was under discussion (a creed still read in the English Church service, though not in the Episcopal churches this side of the Atlantic), learned dignitaries said positively that they did not believe the peculiar points of that ancient symbol. Nevertheless, the same men urged that it be maintained as part of their divine worship, and so it was voted.

So it is in medicine. Even after certain drugs are proved useless, they still retain their hold. People will take sulphur in springtime, though the heavens fall.

A wise old doctor used to say: "I care not whether it be witch or wizard who helps Charlie, if only he is helped."

Today there are such wise physicians, who acknowledge a cure when they see it. Not so with all. There is a conservative disposition, which always denies that any good can come out of Nazareth; yet thence came the mighty Christ, healing and saving bodies and souls.

To the testimony! This should be the cry, as of old. A natural conservatism, a disposition to cleave to the tried and steadfast, may be valuable, and preventive of anarchy and confusion; but equally valuable is a judicious spirit of venture, without which a New World never would have been discovered, or metaphysical healing introduced. OBSERVER. 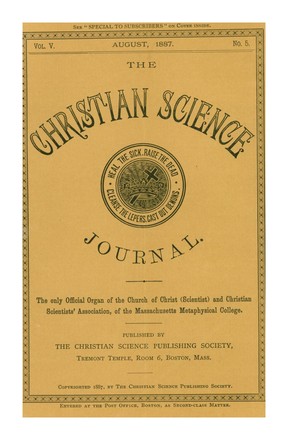 THE STIR IN THE CENTURY

PROFESSED CHRISTIANS AND THE LIGHT

with contributions from A STUDENT, SARAH A. PINE, SUE ELLA BRADSHAW, OBSERVER | August 1887

THE SERMON ON THE MOUNT

THE FORCE OF IMAGINATION

WAYS THAT ARE DARK