I was raised in a faith that did not encourage us to read the Bible, so I had never read it. When I was seventeen, I went to work in the home of a family of Christian Scientists, and after a while I started to read the weekly Christian Science Bible Lessons that I easily found around the house; they are composed of selections from both the Bible and the textbook of Christian Science, Science and Health with Key to the Scriptures by Mary Baker Eddy. I liked what I read, although I did not understand it. As time went on, I tried to understand these Lessons.

Soon after, my employers gave me a copy of Science and Health as a birthday present, and I started to study the book, along with the Bible, and to put into practice what I was learning.

As a result, today I am a happier person, and I have witnessed many healings over more than a decade of practicing Christian Science.

Several years after being introduced to Christian Science, my daughter won a scholarship to a very good school. She started attending third grade at this new school, and despite some challenges, she was promoted to the fourth grade.

In the middle of the academic year I was presented with the greatest challenge. My daughter’s teacher advised me to look for an educational psychologist because she felt my daughter had an attention deficit disorder.

Right from the start, upon hearing the teacher’s diagnosis, I decided to put into practice what I had learned from the Bible Lessons. I began to pray for my daughter from the standpoint that she is spiritual, an idea of God, and reflects only God’s qualities and attributes, such as attention, concentration, intelligence, and harmony.

Even so, it was a very challenging time because I was constantly being called to the school by the school administrators. They made it very clear to me that they felt I urgently needed to find an educational psychologist to work with my daughter, and that this was an indispensable requirement, especially because the child was a scholarship student and she would automatically lose her scholarship if she flunked out.

As required, I took my daughter to appointments with an educational psychologist. Her report was sent to the school suggesting that a neuropediatrician should be consulted, which I also arranged for. I gave the school a voucher with proof that an appointment had been requested and that the date would be set by the health clinic.

Then I asked a Christian Science practitioner to help my daughter through prayer. She assured me that she would and gave me some pertinent passages to read from the Bible and Science and Health.

I diligently studied these passages, one of which is on page 178 of Science and Health and includes this statement: “Heredity is not a law.” That sentence in particular stood out to me, since I remembered conversations with some family members who suggested the possibility that my daughter was displaying learning difficulties because her father had experienced similar difficulties as a child. So I continued praying, knowing that my daughter, her relatives, and all mankind are the children of one Father-Mother, God. We are not, as it appears, conceived by a human parent and made up of genes, or any other material element, because we were created spiritually, entirely by God, divine Mind.

Another passage that the practitioner gave me helped me understand that God’s ideas can inherit only what is good, and that they do not include anything that is not from God, such as a deficit, or limitation. Mary Baker Eddy says on page 463 of her textbook, “A spiritual idea has not a single element of error, and this truth removes properly whatever is offensive.”

And in the February 2010 Herald of Christian Science, Portuguese Edition, I read an article by Susan Mack entitled “Lift off those labels” (originally published in the August 31, 2009, issue of the Christian Science Sentinel). The article helped me a lot to see that my daughter could not be labeled by anyone, and could only be identified as the complete, perfect child of God. The Bible tells us, in Genesis 1:31, that God called everything He created “very good.”

Through Christian Science I learned that in my prayers I didn’t need to ask God for my daughter’s healing, but to be thankful to God that she was continually expressing wisdom, intelligence, and the ability to focus. These qualities are not inherited from a human parent—they come from God, and they belong to her as God’s spiritual likeness. This lifted from me any feeling of personal responsibility for my daughter’s challenges, as I continued to care for her, reflecting God’s care.

As a result of this period of study and prayer, my daughter was promoted to the fifth grade. We were never called for an appointment with the neuropediatrician, and she was released from having to see an educational psychologist.

My daughter has received much praise from her teachers for her schoolwork. Today she is in her third year of high school at the same school, and she recently participated in two research projects that were considered worthy enough to be selected for presentation at one of the highest-ranked universities in Brazil.

I am very grateful for the teachings of Christian Science because they show us that only what is spiritual is real and true. 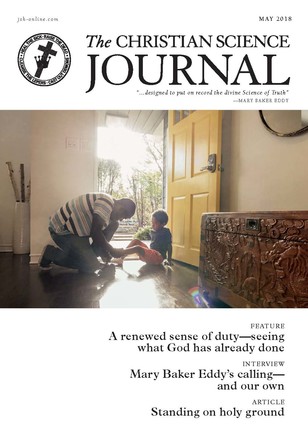