The Scriptural implication that God is All-in-all is, in the teaching of Christian Science, carried to its ultimate and complete conclusion. Allness means all-inclusive everywhereness. Accepting literally the further Biblical statement that there is none beside God, Christian Science reveals that God's allness leaves no space or location where anything unlike God or opposite to His presence can appear as fact or actuality.

Pondering the Scriptures, Mary Baker Eddy, who discovered and founded Christian Science, saw God to be Mind, divine, infinite Mind, and realized that as limitless, infinite Mind, God's consciousness of His own infinity must be everywhere present throughout His universe. Furthermore, the nature of God being good and good only, logic must conclude that in the entire scope of existence evil, or the lack of good, cannot appear as real or true experience.

This conclusion is a radical departure from the theological statements which maintain that evil has been created by God or is permitted by Him for reasons and purposes not understood by mortals. Through Christian Science, thought is lifted from a dual sense of existence, wherein God and man are supposed to know evil, from belief in a world where good and evil commingle or contend, to the comprehension of God as the divine Mind, which is everywhere present, and which knows no evil.

With this impartation of divine revelation to the individual comes the ability to overcome evil upon the basis of its nothingness in the light of God's allness. Christian Science teaches how the divine Mind may be reflected and expressed by those who seek God, how, through this angelic entrance into their affections and understanding, the fears and temptations of evil may be subdued and overcome. Not all at once is evil proved powerless, but as surely as darkness is impossible where light is, just that surely evil is not to be found where God is.

Upon this basis rests the logic of Christian Science, and upon fidelity to this revelation rests the progress of proof to the Christian Scientist. The axiom that two things cannot be in the same place at the same time applies directly to the sense of combined good and evil and spurs one who wants good to cling steadfastly to it, rejecting its opposite. As he does so, the power of the one and the powerlessness of the other are daily manifested to him.

The analogy of light and darkness clearly presents this disappearing of evil through the appearing of spiritual good. Because of planetary obstruction to the light of the sun, there are places in the material sense of the earth where there is no light. But here the similarity to the spiritual light of infinity stops, for since God is All-in-all there is no place or time where God is not. The ever-presence of divine Mind leaves no room for evil.

Darkness is not an entity. It appears only where light is absent, is itself only absence of light. Darkness has no foundation of its own upon which to stand. It has no source or substance, no action or procedure by which to sustain or prolong itself, no power of endurance or continuance. It has no initiative, it cannot gather itself to any kind of starting point; therefore it has no striking capacity. Darkness has no power to focus; it has no aim; it can make no attack. It has never resisted, stayed, or extinguished the entrance of light. It is at most inert, helpless negation. So it is with evil in the light of the allness of God. And when evil is no longer feared, indulged in, or otherwise believed, it likewise is seen to be nothing more than negation and lack, disappearing as the light of Truth appears.

In the Scriptures it is written (I John 1:5), "This then is the message which we have heard of him, and declare unto you, that God is light, and in him is no darkness at all." If we accept literally the allness of God, where can evil be found? In false material belief only; and as belief in its supposed power and actuality lessens in human thought under the light of revelation, the phenomena of evil surely must lessen with the disappearing belief, for the individual and for the world. So comes the healing brought by Christian Science in its revelation of the full meaning of the allness of God.

This understanding brings the problem of existence to a correct solution, for it bases the answer to all human need upon the demonstration, in some measure, of the infinity and allness of God. Christendom has always talked of the mystery of godliness. But in the revelation of Christian Science it is found to be no mystery at all. Mary Baker Eddy writes in her book "No and Yes" (p. 17,) "If mortals could grasp these two words all and nothing, this mystery of a God who has no knowledge of sin would disappear, and the eternal, infinite harmony would be fathomed."

To reduce to nothingness in present experience the false claim of anything other than God and His perfect spiritual creation is the office of Christian Science treatment. Treatment is about this holy task with every healing touch it brings to mankind. The activity of Christian Science brings into individual consciousness the spiritual understanding which acknowledges God as the only actual power and presence. Its practical result is the consequent banishment of the beliefs of material darkness. The understanding of God's presence, admitted in humble obedience to His will, extinguishes in direct proportion material sense with all of its dream paraphernalia.

Christian Science treatment, affirming and realizing the all-inclusiveness of God as divine Mind, recognizes nothing apart from spiritual perfection as real or true or present. Therefore the affirmative prayer which Christian Science names treatment must necessarily include the denial and reversal of error's false claim to presence and action. Such specific use of treatment is necessary because of the present dual sense held by humanity. Faithfulness in such detection and reversal adds much to the value of the treatment and opens the way for its highest healing possibilities. Or, summarized briefly, Christian Science treatment, acting purely in the realm of consciousness, has its basis in the allness of God; its operation in the activity of spiritual understanding. It cognizes and denies specific phases of evil; protects with the knowledge that evil, like darkness, is powerless to resist or to retaliate upon the light of Truth.

A Christian Scientist may well ask himself if he is trying, through silent prayer, to fathom something of the infinite eternal harmony. Does he enter upon a season of reverent thought not only to overcome some specific claim of evil, but to contemplate and realize as far as he may the infinity and allness of God? True prayer goes deeply into revelation, exploring new views of spiritual possibilities. All the unfolding beauty of Soul, all the might of divine Principle, all the safety of invincible Life and Truth, all the Father-Mother tenderness of Love— all these await deeper discoveries by sincere desire.

In such prayer the all-presence of God, as revealed through the synonyms for Him in the Christian Science textbook, "Science and Health with Key to the Scriptures" by Mrs. Eddy, dawns upon human thought in an expanding understanding, in a spiritual illumination, far beyond the confines of temporal boundaries. The limitlessness of God, maintaining, sustaining, and holding within His allness His full creation, holds light and power and comfort for him who ponders it in sincere prayer. Nothingness becomes nothing to him in such prayer. Allness is known as the all-encompassing everywhereness of God, divine Mind, enfolding in peace and safety all that lives.

Man is not someone outside of God trying to find God. Man as God's idea is always within His allness. Man is not involved in duality, in both good and evil, any more than is God. Man is spiritual and perfect as God's idea, and whatever is not in accord with spiritual perfection is not of man, but belongs to the disappearing evil which the light of Truth consigns to nothingness.

As the student of Christian Science identifies himself and all others as the spiritual image and likeness of God, he identifies himself with safety. Since God is complete allness, no creeping evil can get through Him; since God is boundless presence, no evil thing can get around Him. His allness makes impossible anything unlike Himself. Every mortal can awaken from his mortality and go home to his real selfhood within the allness of God any time he so desires. He can dwell there as much as he chooses. So doing, he learns that just as much as he holds to the spiritual idea he finds the spiritual idea abiding with him.

To the extent that this great revelation is realized, the plagues of earth must yield to it as darkness fades before the coming of the light of day. By little or by much each one may prove for himself that through this understanding of allness and nothingness Christian Science heals.

Surely the disciple Paul recognized and to a great degree realized this scientific spiritual fact of man's existence within the allness of God when he declared to the Athenians (Acts 17:28), "In him we live, and move, and have our being." Mrs. Eddy writes in her book "Unity of Good" (p. 3): "God is All-in-all. Hence He is in Himself only, in His own nature and character, and is perfect being, or consciousness. He is all the Life and Mind there is or can be. Within Himself is every embodiment of Life and Mind." And in the paragraph which follows this she adds, "If He is All, He can have no consciousness of anything unlike Himself; because, if He is omnipresent, there can be nothing outside of Himself." 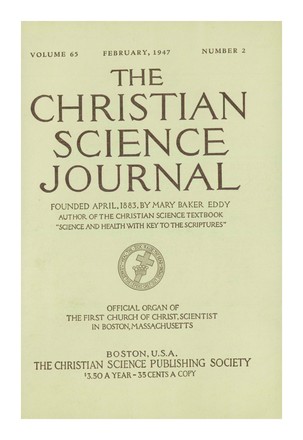 THE ALLNESS OF GOD

CHRIST JESUS AND THE MULTITUDES

COME IN, MY CHILD

THE TRUE SENSE OF ENGINEERING

"TO FORESEE AND FORETELL"

MAN IS AGELESS AND SECURE

"THE SPIRITUAL REALITY IS THE SCIENTIFIC FACT"