At the time, I didn’t recall where I had read those words before, but they were all I could think of the night our home was caught in the center of a massive brush fire. Whipped by gusty winds, the blaze was traveling at 100 miles per hour and licking up the homes around us in 15-second intervals.

When we opened the door to leave, with the police bullhorn outside informing us that we had 90 seconds to do so, the flames shot inside the entrance hall. We stomped them out and ran outside. I recall wondering why we had bothered. Habit, I guess, to take care of things even though they might not last beyond a few moments.

We gathered the family together in the parking lot of a church in a neighboring town and caravanned to a friend’s home many miles away from the fire. We all tried sleeping on the living room floor, but my husband and I were wide-awake and sneaked out to a 24-hour McDonald’s, taking our periodicals with us.

We thought about how to get our lives together the next day, and it looked like a formidable task. We had nowhere to go, no records, no clothing, nothing—but Christian Science. We had moved to California decades ago as newlyweds with nothing—but Christian Science. Following what we had learned in our studies of this Science, we had grown and prospered. Now we humbly acknowledged that anything we had acquired, and now left behind, had come to us directly or indirectly as a gift from God, a loving God that Christian Science had introduced us to.

We had nowhere to go, no records, no clothing, nothing—but Christian Science.

So, we still had Christian Science, and with that we could begin again. The most valuable treasure we owned was fireproof. The phrase “The flame shall not hurt thee” from Hymn 123 in the Christian Science Hymnal kept resounding in my thought. It reminded me that no one had died in the fire, for which I was grateful, although the loss of all our possessions and the complications to follow seemed overwhelming that night.

With gratitude for Christian Science, we decided we needed to pray for the protection of that treasure. Our material acquisitions were history, as far as we knew, so there was no reason to pray for their recovery. But our beloved Christian Science was unscathed … or was it? Would people feel it had failed us, that God had failed us, because we had lost everything? We did not want anyone to be discouraged because of our loss, so our prayers were directed toward protection for our Church family, that no one be negatively affected by what had happened.

We affirmed that the flames had no power to hurt us, our beloved Church, or its members. In the Glossary of Science and Health with Key to the Scriptures, Mary Baker Eddy defines Church, in part, as “the structure of Truth and Love; whatever rests upon and proceeds from divine Principle” (p. 583). A lifetime of study and healing in Christian Science had confirmed for us that a material structure could be dismantled, but the spiritual sense of any structure, be it person, place, or thing, would remain untouched. We held to the truth that no matter what the material senses report, everything in God’s creation is eternally perfect and indestructible.

The following morning we returned to our friend’s house. Everyone was awake and watching the news, which was devoted to the fire. The first picture that came up on TV was our house, cited as the miracle of the fire. Although it had been in the center of the fire storm, surrounded on four sides by a wall of flame, and no firefighters had come near it, it appeared to be untouched. Over 400 houses surrounding it were down. The firemen had written our immediate area off, as they did not have sufficient water to protect it.

How could this be? We hiked back to our town (cars were not allowed for the last 12 miles, as the ashes were still smoldering). Nearly everything in the neighborhood was gone. Only ashes and fireplaces remained, standing alone and foreboding in their eeriness. But there was our house, intact. The eaves were scorched, indicating that the fire had touched the house and then stopped. We opened the door to see everything just as we’d left it—white walls, white furniture, white carpet, and not even a smell of smoke.

The newspaper reported that our house was saved through the prayers of Christian Scientists.

How was this possible? The house wasn’t constructed of fireproof materials, and there had been no human means available to protect it. The mystery soon unfolded. We had no gas, electricity, or water, but one utility had survived—the phone. It was ringing when we entered the house. A Christian Scientist was calling from Germany to report that she and her fellow Church members had heard of the fire via cable TV and had organized a prayer network to pray for our safety.

As soon as we hung up, a call came from London. The caller said that they too had heard of the fire, and that Christian Scientists in the British Isles were supporting us prayerfully. Calls like these came for the next few hours, all from fellow members of The Mother Church. These were people who didn’t know me personally but remembered me from Christian Science lectures I had given in their locations and knew that my husband and I lived in Laguna Beach, California.

It was quite humbling to realize that while we were praying for our beloved Church family, they were praying for us. The power of that global unity was proven that day. Hymn No. 264 from the Christian Science Hymnal says it well: “Like a mighty army … All one body we.”

On the day following the fire, a newspaper reporter called and asked how it was possible that our house could have been saved. My husband told her it was the result of prayer. She said she did not believe in prayer. Couldn’t it be explained by a miraculous wind change? He asked her who she thought controlled the wind. She retorted, “That’s where we started, isn’t it?” He replied, “I never left where we started.” The reporter said she would call the fire chief and find out what really happened. The fire chief responded that, because the flames had actually touched the house and were traveling so fast, he “could not discount divine intervention.” And that’s what was printed in the newspaper.

It’s a story that spoke to the power of prayer—so much so that it still resonates in our community. The fire was over two decades ago, and on the 20-year anniversary, our local newspaper called and asked us about the fire. They reported that our house was saved through the prayers of Christian Scientists.

As soon as we could get back into the house after the fire, I looked up that phrase from Hymn 123. Here is the final stanza of the hymn:

When through fiery trials thy pathway shall lie,
My grace, all sufficient, shall be thy supply;
The flame shall not hurt thee; I only design
Thy dross to consume and thy gold to refine.
(Christian Science Hymnal, No. 123, adapt. © CSBD)

The community that was burned has since been transformed, and a once generic area is now a beauty to behold. Neighbors rebuilt their homes with matured vision. Where outdated structures once stood, new designs have emerged, much like uprooted plants that have been transplanted and come back stronger. The houses may have been eaten by the fire, but the homes had not. Looking around our neighborhood now, I am reminded of Joel 2:25, “I will restore to you the years that the locust hath eaten.”

Chances are slim that you’ll ever be caught in a fire of this magnitude, but we’ve all felt the flames of evil licking at us in one way or another. The lessons I learned from this fire are universal and apply to any problem: We are not to judge by sense testimony; we are not to accept incurability; there is no point of no return; and God is so good. But we knew that last one already, didn’t we? 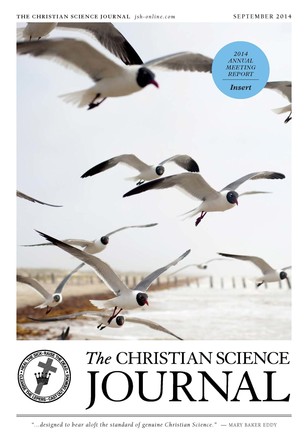 A call to action

‘The flame shall not hurt thee’

Love is all there is

Lord of the answers

Prayer leads to a new home

Nothing but love could remain

The ‘rivers’ of healing