The CSO provided me with a Christian community, as well as an evangelical mission.

At first, my attendance was motivated by the desperation I felt and the yearning for a deeper understanding of the meaning of life. My goal at that time was to find answers to the ontological questions that were percolating in my consciousness: Who am I? Why am I here? What is my purpose?

When I first began attending the CSO meetings, I mutely listened, being intensely shy. But I wanted to be more unselfish, and eventually I was able to share a few halting words of thanks for what I was learning. The other CSO members were incredibly kind and patient as I worked to get over my shyness. They were much like my vision of the early Christian community, in their support of my spiritual progress.

The CSO provided me with a feeling of home—a home that offered warmth, love, stability, and structure, but not a closed, clubby feeling. It also provided the evangelical mission of sharing the news of God's healing power with the rest of the campus.

My love of God and the desire to share with others helped me overcome a severe sickness during my sophomore year. One evening I had dinner with a friend in her dorm (Parsons House), which was being plagued by a mysterious illness nicknamed Parson's Plague. People affected by it spent several days to a week in the infirmary. At that point in my spiritual development, I didn't realize that I could pray to be protected from sickness.

Later that evening, in my dorm room, I began to have the flulike symptoms of the "plague." I turned on some music and tried to study the Bible and Science and Health, but I finally just went to sleep. In the morning, I tried to go to breakfast and almost passed out. My best friend in the dorm suggested that I go to the infirmary, but I knew that if I went, I would be accepting the illness and its consequences (a long infirmary stay). Instead, I decided to stay in bed and read Science and Health.

I read the chapter "Science of Being" in Science and Health and prayed to understand what I was reading. By that afternoon I was able to prepare for a CSO event that evening and to enjoy the activity. I'm convinced that the truths I read, and my desire to fulfill my obligation to the CSO, resulted in my healing.

Healings like this, as well as the joy, peace, and fulfillment I was finding, made me want to share Christian Science freely. Several friends during college gladly received copies of Science and Health I gave them and would sometimes ask for my prayers.

As I went on to graduate school, I continued to support CSO activities at each of the universities I attended. I loved being part of a sharing, supportive Christian community. And I loved the feeling of purpose I gained from living Christian Science in the university community. 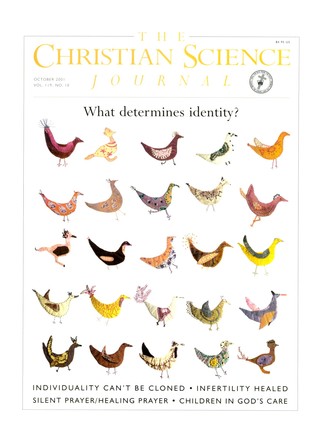 A family's thoughts on identity

The appeal of spiritualism

When you pray, be scientific

Discover who you are . . . and the job will follow

By Cynthia Gray with contributions from Bruce Clark | October 2001

A television anchor moves from self-conscious to God-conscious

A hairdresser's story—then and now

By Marty Foster with contributions from John A. Brooks | October 2001

At home in two cultures