A Christian Scientist had long enjoyed an almost uniform sense of good health, which he attributed to his understanding, gained through Christian Science, of God as the only Life, and which he took very much for granted; but the time came when he found it necessary to establish his sense of health on the sure foundation of Christianly scientific demonstration. The aggressive mental suggestions poured into thought: Your health has been undermined, you have lost your health, you may not recover, and so on. In blessed reassurance came the inspired words of Isaiah (59:19), "When the enemy shall come in like a flood, the Spirit of the Lord shall lift up a standard against him." And so it proved.

Mary Baker Eddy, the Discoverer and Founder of Christian Science, writes in the Christian Science textbook, "Science and Health with Key to the Scriptures" (p. 297), "It is as necessary for a health-illusion, as for an illusion of sickness, to be instructed out of itself into the understanding of what constitutes health; for a change in either a health-belief or a belief in sickness affects the physical condition." A belief in health based on the illusion of health as a physical condition is no more stable or real than a belief in sickness, for both are built on the sands of human variableness and have no foundation in Truth.

What then is health, and where is it to be found? Christian Science reveals health as a condition of Mind, of God, Spirit, not of matter. Hence scientific health is spiritual, an emanation of God. It is found in an understanding of God and exists wholly apart from the supposititious conditions of matter. Health is associated with holiness; the words health, holy, and whole have the same Anglo-Saxon derivation.

Christ Jesus illustrated the spiritual nature of health. With simple naturalness the Gospels recount multitudes made whole through the tender ministrations of the great Physician. His word broke the mesmerism and set the captive free. To the man whom he healed of the palsy he said (Luke 5:20), "Man, thy sins are forgiven thee," showing that true health is akin to holiness, not merely an absence of physical bondage. Jesus demonstrated God's law as a law of Love, not a law of penalty; he recognized no secondary law as able to defy the divine law. He accepted no evidence of the physical senses, but refuted it on the ground that it is un-Godlike, hence illegitimate and untrue. He knew that God is the only power, and that God, good, is as incapable of sending evil as He is of experiencing evil; hence, that God is not the author of sickness. To those who through steadfast adherence to his teachings became his disciples he promised (John 8:32), "Ye shall know the truth, and the truth shall make you free." Jesus never compromised with error. He never administered material remedies. He proved health to be always present and forever intact, waiting only to be revealed through an understanding of God.

Mrs. Eddy defines "health" thus (Miscellaneous Writings, p. 298): "The true consciousness is the true health." Let us examine this statement and see where it leads. Since God is Mind, there is but one Mind, hence there can be but one consciousness, namely, Mind's awareness of itself. Consciousness cannot cognize or experience that which is unlike God, because God knows and experiences nothing beyond Himself. Mrs. Eddy says (Science and Health, p. 276), "Man and his Maker are correlated in divine Science, and real consciousness is cognizant only of the things of God." Outside of infinity nothing exists. Consciousness, then, is infinite; it is Mind's awareness of itself as Life, as Soul, Spirit, Principle, Truth, and Love. Thus true consciousness, or health, is God's consciousness of Himself reflected in the harmony of His creation— God's consciousness or experience of unlimited Life, without beginning or end; of the transcendent beauty of Soul, unmarred by flaw or blemish; of the vibrant energy of Spirit, the invariability of Principle, the substance of Truth, the well-being of Love.

Health cannot fluctuate. Man is the manifestation of health, as inseparable from health as he is from God. Health can no more be lost than God can be. It is incorruptible, inexhaustible, sound. It can never break down, can never lapse into disease, can never be tainted. Man's being, the reflection of God's being, is without poison, without defect, without pain, perfect in strength and freedom of action. Being is the rhythm of Soul; hence every function of being is normal, painless, unlabored, regular. Being is incapable of congestion or stoppage, of inflammation or decay. There is no obstruction to health because there is no obstruction in consciousness. There is no paralysis, because Mind or consciousness is perpetual motion. "The true consciousness is the true health."

Health does not inhere in a physical body; it is not controlled by physical law, is not shaped by hereditary belief. Health is God's expression of harmony. Man has no health apart from God; hence God is responsible for man's health. Furthermore, since there is but one consciousness there is but one health, and it is always complete health, always good health. There is no partial health, because there is no partial consciousness, no partial Mind. There are no degrees of health; Mind or Life in every instance expresses itself fully. There is no deterioration, no decomposition in Mind. Consciousness never lapses into unconsciousness; health never lapses into disease.

Health never stagnates; it never grows old; it never wears out. It is not localized; it is infinite. There is not more health in one place than in another. Health is not subject to atmospheric conditions, to temperature, to altitudes. Climate has nothing whatever to do with health.

Since health is infinite, it is universal. Also, being infinite it has never been lost; therefore it does not have to be regained. Health is never uncertain. Man is not dependent on his health for his efficiency; being dependent alone upon God, man manifests the health which God expresses. Because man reflects infinity he is never the victim of exhaustion. The limitless capacities of Life never wear out, they never grow threadbare, they never slow up. Man can no more break down than God can; he is never prostrated, because Mind, his Mind or consciousness, is forever active, forever intelligent, forever free, forever expressing the buoyancy of Soul.

Health is not something to be theorized about; it is a spiritual fact which demands demonstration. Mrs. Eddy points out that the basis of all disease is fear, ignorance, or sin (see Science and Health, p. 411: 20-21). Christ Jesus proved this, as a study of his healing works will show. All erroneous conditions are the result of false education. Thus certain diseases are deemed contagious, others fatal. In every case mortal mind maps out the course and pronounces the sentence, and the one infinite, ever-available remedy is pure Mind. God knows nothing of curable or incurable diseases. He knows no man who needs healing. He rejoices ever in His own unrestricted expression of good.

A little Christian Scientist, instructed in the Christian Science Sunday School in the sweet naturalness of good, went one day to visit a friend who was not a Christian Scientist. The little friend's mother opened the door and promptly sent the visitor away, saying that she would get sick if she came in, because her child was sick. With simple logic the little Christian Scientist later said to her mother: "But, Mother, if Alice is sick and I am well, why should I get sick from her? Why shouldn't she get well from me?" It was many years later when the little girl now grown to womanhood discovered the identical reasoning in Mrs. Eddy's article entitled "Contagion" in "Miscellaneous Writings" (see p. 229).

The sure foundation of health is the impregnable oneness of God and man, of Mind and its idea. Mind without idea would be a nonentity; idea without Mind would be an impossibility. Thus idea has no existence separate from Mind; it never gets outside of Mind; it has no substance other than Mind, no entity or ego apart from Mind. It were as impossible for pure Mind to evolve an impure idea as for pure Mind to hold within itself an idea capable of corruption or contamination. Thus health is inherent in God's idea, the idea which is forever showing forth the beauty of Soul and the holiness of Love. God's consciousness of His own allness is the only true consciousness, and this true consciousness is true health, the health that is forever intact.

This article is included in:
1978 - PAMPHLET

This article is included in:
1953 - PAMPHLET 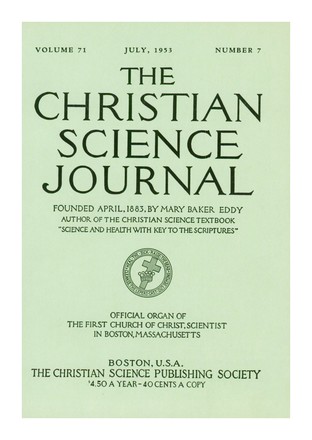 ANNUAL MEETING OF THE MOTHER CHURCH

THE MATHEMATICS OF CHRISTIAN SCIENCE

"ALL THAT I HAVE IS THINE"

"BE GLAD AND REJOICE"

AFTER THIS MANNER WE PRAY

I am sincerely grateful to Christian Science...

As my previous testimony appeared in...

It must be over twenty years since my...

I am truly grateful for the privilege of...