My contact lenses had become a nuisance. I was spending a lot of time in the water at an outdoor summer camp I was attending on Lake Michigan. And I was constantly either forgetting to bring my contact lens case down to the lake or misplacing it. At night I usually didn't have time to properly clean the lenses.

The real issue, though, wasn't the inconvenience of wearing contact lenses. Since the age of five, I'd had to wear thick glasses or contacts to correct a condition diagnosed as amblyopia.

I had often been healed of various illnesses and other difficulties through prayer, and over the years my parents and I had prayed about my vision. We had also periodically requested the prayers of a spiritual healer—a Christian Science practitioner. But for some reason I just accepted this vision problem as part of me and never truly believed that my eyesight would get any better.

Now, though, I thought of this hassle with my contact lenses as an opportunity to heal my vision through prayer. I gave up in a matter of hours, however. I was so frustrated and discouraged, because without my contacts, I couldn't read anything. I even had trouble seeing the person I was talking to.

The next morning, when I went outside to read the Christian Science Quarterly weekly Bible Lesson, one sentence from Scienceand Health stood out to me: "We must realize the ability of mental might to offset human misconceptions and to replace them with the life which is spiritual, not material" (p. 428).

To me, this meant that mental power could correct, or offset, the misconceptions I'd been holding about my eyes. In other words, I didn't need to rely on my contacts to help me see, because if my life truly was spiritual—as Science and Health said—then I was already complete without needing material aids, such as contacts or glasses, to help me see.

I wanted to heal my vision through prayer.

Feeling more inspired than before, I decided to take my contacts out again. Every day that week I studied the Bible Lesson, and every day my vision improved a little. The following week, the subject of the Lesson was "Truth." One morning I felt very inspired by something else I read, again from Science and Health: "With its divine proof, Science reverses the evidence of material sense" (p. 215). Though it sounds simple, this sentence had a great impact on me, because later that day I realized that my sight was clear. I believe this was because my thoughts were so full of the spiritual truth I'd been learning that there was no room for any of those misconceptions about my vision. Consequently the vision was naturally corrected. Today, more than four years later, I still do not need glasses or contacts. My vision is perfect.

It amazes me how simple my healing was. Once my concept of poor vision was changed and I could see myself as spiritually complete, I was healed.

Julie always had the most beautiful blue eyes, and they sparkled with assurance, even as a baby. That's why we were so surprised when we noticed that when she was about four-and-a-half years old, she was crossing her eyes in order to focus.

As Julie says, we prayed for her and also asked for the prayers of a Christian Science practitioner. From this we gained a more spiritual view of vision. But there still wasn't any improvement in her eyesight, so we took her to an optometrist to see about glasses before she began kindergarten.

She was referred to a specialist, and the problem was diagnosed as amblyopia. She began wearing strong corrective lenses immediately.

Throughout the years, we continued to pray and occasionally asked Christian Science practitioners to treat her.

The camp staff was not aware of Julie's healing until, at the end of session, she told them that she no longer needed her contacts. Since this healing, which happened about four and a half years ago, her vision has been completely normal. 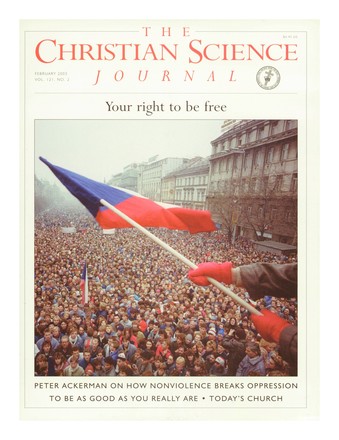 A path to freedom

By Rosalie Dunbar with contributions from Peter Ackerman | February 2003

A recipe for bringing down dictators

How are you praying for humanity's freedom?

Learning about more than music from Bobby McFerrin

True identity can never be stolen

By Jenny Sawyer with contributions from Gail Hansberry | February 2003

Imprisoned by disease? There is an answer

Decisionmaking and the art of listening

The family: home and haven