"But who is mixing the fatal draught that palsies heart and brain,
And loading the bier of each passing year with ten-hundred-thousand slain?
Who blights the bloom of the land today, with the fiery breath of Hell,
If the Devil isn't, and never was? Won't somebody rise and tell?"

Certain individuals entertain the notion that Christian Science Mind-healing should be two-sided, and only denounce error in general,—saying nothing, in particular, of error that is damning men. They are sticklers for a false, convenient peace, straining out gnats and swallowing camels. The unseen wrong to individuals and society they are too cowardly, too ignorant, or too wicked to uncover, and excuse themselves by denying that this evil exists. This mistaken way, of hiding sin in order to maintain harmony, has licensed evil, allowing it first to smoulder, and then break out in devouring flames. All that error asks is to be let alone; even as in Jesus' time, the unclean spirits cried out, "Let us alone! What have we to do with thee?"

Animal Magnetism, in its ascending steps of evil, entices its victim by unseen, silent arguments. Reversing the modes of good, in their silent allurements to health and holiness, it impels mortal mind into error of thought, and tempts into the committal of acts foreign to the natural inclinations. The victims lose their individuality, and lend themselves as willing tools to carry out the designs of their worst enemies, even those who would induce their self-destruction. Animal Magnetism fosters suspicious distrust, where honor is due, fear, where courage should be strongest, reliance, where there should be avoidance, a belief in safety, where there is most danger; and these miserable lies, poured constantly into his mind, fret and confuse it, spoiling that individual's disposition, undermining his health, and sealing his doom, unless the cause of the mischief is found out and destroyed.

Other minds are made dormant by it, and the victim is in a state of semi-individuality,—with a mental haziness which admits of no intellectual culture or spiritual growth. The state induced by this secret evil influence is a species of intoxication, in which the victim is led to believe and do what he would never, otherwise, think or do voluntarily.

This intricate method of Animal Magnetism is the essence, or spirit, of evil, which makes mankind drunken. In this era it is taking the place of older and more open sins, and other forms of intoxication. A harder fight will be necessary to expose the cause and effects of this evil influence, than has been required to put down the evil effects of alcohol. The alcoholic habit is the use of higher forms of matter, wherewith to do evil; whereas Animal Magnetism is the highest form of mental evil, wherewith to complete the sum total of sin.

The question is often asked, Why is there so much dissension among mental practitioners? We answer, Because they do not practise in strict accordance with the teaching of Christian Science Mind-healing. If they did, there would be unity of action. Being like the disciples of old, "with one accord in one place," they would receive a spiritual influx impossible under other conditions, and so would recognize and resist the Animal Magnetism by which they are being deceived and misled.

The mental malpractitioner, interfering with the rights of Mind, destroys the true sense of Science, and loses his own power to heal. He tries to compensate himself for his own loss, by hindering, in every way conceivable, the success of others. You will find this practitioner saying that Animal Magnetism never troubles him, but that Mrs. Eddy teaches Animal Magnetism; and he says this to cover his crime of mental malpractice, in furtherance of unscrupulous designs.

The natural fruits of Christian Science Mind-healing are harmony, brotherly love, spiritual growth and activity. The malicious aim of perverted mind-power, or Animal Magnetism, is to paralyze good, and give activity to evil. It starts factions, and engenders envy and hatred. But as activity is by no means a right of evil and its emissaries, they ought not to be encouraged in it.

Because this age is cursed with one rancorous and lurking foe to human weal, those who are the truest friends of mankind, and conscientious in their desire to do right, and to live pure and Christian lives, should be more zealous to do good, more watchful and vigilant. Then they will be proportionately successful, and bring out glorious results.

Unless one's eyes are opened to the modes of mental malpractice,—working so subtly that we mistake its suggestions for the impulses of our own thought,—the victim will allow himself to drift in the wrong direction without knowing it. Be ever on guard against this enemy.

Watch your thoughts, and see whether they lead you to God, and into harmony with His true followers. Guard and strengthen your own citadel more strongly. Thus you will grow wiser and better through every attack of your foe; and the Golden Rule will not rust for lack of use, or be misinterpreted by the adverse influence of Animal Magnetism. 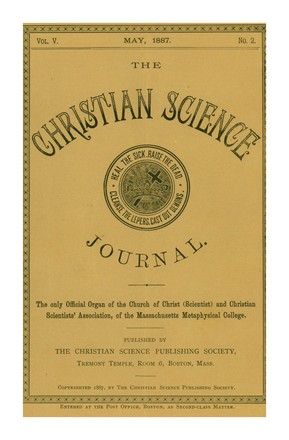 HABITS, AND THEIR CURE

SOME CONSIDERATIONS OF ERROR AND BELIEF DISCUSSED

A WORD TO BEGINNERS

THE BLOOD OF JESUS

with contributions from RICHTER, WORDSWORTH, HARE, E. B. BROWNING, LANGDON, MILTON, ANON | May 1887

THE DESIGN OF LOVE

FAITHLESSNESS OF THE SENSES

THE STORY OF THE ASS WITH TWO EARS

Victor Hugo's Tales to his Grandchildren, | May 1887

DAME PIG AND HER FAMILY

WAYS THAT ARE VAIN

A mesmerist, of Detroit, obtained such control over the mind...