Do you ever wonder about the why of evil? For many years I persistently questioned why evil even seems to exist, until I finally found that pondering evil’s apparent existence was an obstacle holding me back from healing. The following comparison has been a great help for me to understand why this is so.

Many of us have been driving on the highway in hot, dry, and windless weather when it appears there is a big puddle on the road ahead. But we don’t brake, because we know there’s no puddle there. It’s just a mirage, or what I like to call an optical lie. As we continue driving, the puddle disappears before our eyes.

This mirage is without substance, and therefore it can’t make us skid. We could even say the “puddle” is without reality, although we all see it. So, we cannot directly answer the question, “Why is there a puddle on the road?” because there is none there. Nor should we ask, “How could this big puddle evaporate so quickly?” because this question is based on the wrong assumption that there had been an actual puddle there. The only thing we can do is explain the phenomenon of mirages and what makes the puddle appear to be so real.

As you may see, the point is to consider whether there is actually any basis for the questions being asked. As we drive, we find that what has changed is not the condition of the road; it is our perception of it. We have moved forward and thus have a new perspective—a perspective from which the optical lie no longer has any influence on us, and so we recognize the truth about the condition of the road.

Only when the old point of view is given up—in the light of the true or real—can we move forward because our conclusions and actions are built on the truth. Mary Baker Eddy, the Discoverer of Christian Science, wrote in her book, Science and Health with Key to the Scriptures: “Willingness to become as a little child and to leave the old for the new, renders thought receptive of the advanced idea. Gladness to leave the false landmarks and joy to see them disappear,—this disposition helps to precipitate the ultimate harmony” (pp. 323–324).

Once I was asked by a horse owner to pray for a horse that was suffering from a severe fungal disease and was in danger of dying. The horse was in the animal hospital, and the veterinarian wanted to put it down the next day.

I didn’t waste a second thinking about the reason for the illness or whether I would be able to help the horse. I stayed on course, undeterred by this “puddle in the road.” My entire consciousness was focused on recognizing God’s omnipresence, which includes the harmony of the horse and the people who care about it.

The horse knew nothing about me or my work. But my prayer was not about words; it was rather a humble willingness to be taught by divine Mind and to leave material landmarks to reach more spiritual ones. Instead of surrendering to doubt, I was willing to deepen my faith in the power and presence of good. The quality of my prayer was not mental willpower, which tries to make a “puddle” vanish, but faithful receptivity to the divine harmony, which recognizes only what God is and knows to be true or real.

When the veterinarian came to examine the horse the next day, there was such a huge improvement that the horse was released from the animal hospital. And at a checkup several days later, the horse was found to be completely healthy, and it remained so. Animal healings show so clearly that healing through prayer is not based on anything psychological, but is purely spiritual. And this is, of course, true for all of us!

Pondering evil’s apparent existence was an obstacle holding me back from healing.

Christ Jesus told his disciples, “If ye have faith as a grain of mustard seed, ye shall say unto this mountain, Remove hence to yonder place; and it shall remove; and nothing shall be impossible unto you” (Matthew 17:20). Is it perhaps our dispositions and perspectives that are these mountains to be removed? If our faith is sufficient to make us want to leave material views more and more willingly, and to do so in order to take more spiritual views, then we will understand more clearly the insubstantiality of seemingly frightening situations on the road of our lives.

Whatever we call the threat—evil, fear, disease, sin—it can be classified in Christian Science as a lie and thus corrected. And how is a lie corrected? By the truth.

The truth that Jesus lived and taught is still here, as it has always been, and can be demonstrated by everyone who strives for it. Jesus never ignored evil, but classified it as a lie and dissolved it through truth, and this approach is also taught and demonstrated in Christian Science.

Sometimes the problem might look too big to heal. But just as it does not matter whether the puddle on the highway looks small or large—because the disappearance of it is certain from the beginning—the seeming problem can be spiritually dealt with—healed—based on the same truth that there has never been any substance to it. To actually see the puddle vanish, we have to drive on. In healing, we have to leave old mental landmarks. It is the elevation of thought that is necessary to see the truth. So, the step we have to take is to lift thought above matter, rather than trying to see the truth from the old landmark.

A large puddle might impress us more strongly, and we may hesitate, become annoyed or frightened, and even look for culprits or complicated ways to get around the puddle. But the solution is to see the puddle for what it is: a phenomenon that is visible, but without substance and without power—an optical lie that cannot harm us, even when we expose it as a lie and move forward.

Again and again I notice difficulties dissolve that I thought would solidly block my way. I’ve come to understand better and better that these difficulties were lies about my existence, which I had believed for a time instead of immediately exposing and healing them. But when the lies are exposed to the truth, I make spiritual progress, and then the lies dissolve in a similar way to the puddle on the street and are healed.

This kind of healing has nothing to do with human willpower or human ability. Jesus told us this very clearly when he said: “The Son can do nothing of himself, but what he seeth the Father do: for what things soever he doeth, these also doeth the Son likewise” (John 5:19).

I always find it liberating to dwell on that statement. For me, it’s a bit like breathing out. Exhaling creates space for inhaling. Releasing a spent, outdated understanding of myself makes room for a new one. So, beliefs such as “I have insurmountable mountains ahead of me, and I have to do it all on my own, and I have no idea how” can make room for, “I cannot (and do not need to) do anything on my own. This does not make me inactive, but frees me from the false assumption that I myself am the source of activity.”

All power, all ability, all good, come from God. God, Mind, Love, is the creator, and we all are the effortless expressions of this permanently active, glorious Supreme Being. 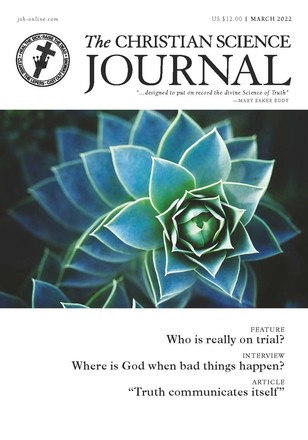 Who is really on trial?

Where is God when bad things happen? Part 1: The basics

Learning to be a good sheriff

Look up, and be healed

No degrees of disease

Finding peace and purpose in isolation

By The Christian Science Board of Directors | March 2022

The Trustees Under the Will of Mary Baker Eddy

A golden thread—four generations of healing and hope

By Tony Lobl with contributions from Chris Raymond | March 2022