Understanding that we are inseparable from God is a trustworthy remedy when we need immediate help. The Bible is full of accounts and prayers that teach us of God’s constant presence, and of His dauntless love and power to overcome evil with good—as we read in Psalm 139: “Whither shall I go from thy spirit? or whither shall I flee from thy presence? If I ascend up into heaven, thou art there: if I make my bed in hell, behold, thou art there. If I take the wings of the morning, and dwell in the uttermost parts of the sea; even there shall thy hand lead me, and thy right hand shall hold me. If I say, Surely the darkness shall cover me; even the night shall be light about me” (verses 7–11).

One weekend a number of years ago I flew my small single-engine airplane from my home airfield in Massachusetts to a little airport on the coast in southern Connecticut. My flight instructor and I were meeting up to do a day’s training in instrument flying (flying in which you must use instruments to navigate). As a Private Pilot without an Instrument Rating, I was limited to flying in only certain kinds of weather.

We had a good day of training, flying routes all over the New England countryside, and then returning to the airport to drop off my instructor. By the time we landed it was dusk, and bad weather was moving in. However, I made the decision that there was enough fuel and, if I departed for home promptly, I could get ahead of the bad weather.

As I lifted off, all was peaceful, and the night was beautiful. I was flying through falling snow, but the snow clouds were well above me, and the visibility for tracking landmarks below was relatively good. But, that didn’t last. As I flew north, clouds began to obscure both my view of the ground and visibility at my altitude. In a matter of minutes I was in conditions I was unprepared to handle.

Thoughts of incompetence began to come. Did I truly know where I was? Were the instrument settings correct? Was I capable of staying mentally composed and in control of the plane? I remember responding to these doubts with a positive “I can handle this.” But then I became aware that a trance-like state of thought was starting to overwhelm me, obviously induced by fear. My eyes wouldn’t focus, my hands were sweating, and I couldn’t make a logical decision about anything. In this confusion, along with the poor visibility, I lost track of landmarks and, worst of all, started to imagine I had drifted off course (which I hadn’t). So I changed the direction I was heading, hoping to find familiar landmarks and the correct course. But in the mental haze I didn’t realize that I was heading straight out to the ocean!

I was feeling so stressed that I started feeling strongly tempted to just give in to the trance—to relax, to feel peace, and to close my eyes and sleep in the comfortable mental haze and drone of the engine. But this immediately raised a red flag to me. It had the effect of waking me up to the fact that I needed to fight back. This red flag popped up when I realized that the temptations to give in and “feel peace” in that potentially dangerous situation were similar to an experience my dad had related when he was teaching my brothers and me about the nature of hypnotism or animal magnetism.

In my dad’s lesson to us, he described the experience of a friend of his who had been a trapeze performer for a circus. His friend had told him how, owing to the constancy and repetitiveness of his aerial routines, a mental voice would occasionally come to him while he was performing and suggest that he just relax and let go, that he didn’t need to be so vigilant and precise night after night. He said the temptations were very strong and also very soothing, but he was always able to identify them as not coming from him and defeat them by immediately talking back, insisting that the suggestions were not his own thinking and that he was not going to listen to or obey them. He knew that his true thoughts were from God and had no similarity to the nature of these self-centered and evil thoughts.

This mental phenomenon, animal magnetism, is explained in the writings of Mary Baker Eddy, the Discoverer and Founder of Christian Science. In an article called “Ways that are Vain,” in The First Church of Christ, Scientist, and Miscellany, she pinpoints the threat it presents unless identified and proved powerless:

“Animal magnetism, in its ascending steps of evil, entices its victim by unseen, silent arguments.… Animal magnetism fosters suspicious distrust where honor is due, fear where courage should be strongest, reliance where there should be avoidance, a belief in safety where there is most danger; and these miserable lies, poured constantly into his mind, fret and confuse it, spoiling that individual’s disposition, undermining his health, and sealing his doom, unless the cause of the mischief is found out and destroyed” (p. 211).

Science and Health with Key to the Scriptures by Mary Baker Eddy dedicates a whole chapter to the subject, titled “Animal Magnetism Unmasked.” It teaches the impotency of the lies of the hypnotism or animal magnetism of mortal mind—the supposed mind, which would counterfeit the divine Mind, God—and the power of understanding God as our real and ever-present Mind. Mrs. Eddy states there, “The truths of immortal Mind sustain man, and they annihilate the fables of mortal mind, whose flimsy and gaudy pretensions, like silly moths, singe their own wings and fall into dust” (p. 103).

When I started to wake up and realize that I was being entranced by fear and other hypnotic thoughts masquerading as my own thinking, I found the courage to literally shout out: “God is my Mind! God is my Mind! I can do nothing on my own! God is right here! Now!”

At that moment the fear quickly dissipated. It was like waking up from a dream. The atmosphere in the cockpit became one of intelligence and calm, the presence of Mind. It was as if someone had poked a vacuum hose through the window and sucked out the polluted mental haze.

I looked out my side window and then back at the chart in my lap and knew exactly where I was. I was about a mile south of Nantucket Island off the coast of Massachusetts and heading to open water. So I turned back to the mainland, and found and joined my original course. Visibilities had improved as well, and so I started identifying and tracking all the necessary landmarks. There were still clouds and periodic precipitation from above, but none of it obscured my route the rest of the way back to my home field.

As I thought about it later, I realized that the all-knowing Mind had been with me all along. When I remember this experience now, I sometimes think about, “Yea, though I walk through the valley of the shadow of death, I will fear no evil: for thou art with me” (Psalms 23:4). This is such a profound reminder that we are never away from omnipotent Love, the divine Mind, always protecting us by supplying us with intelligent ideas. Pursuing safety and security through mortal mind will always be a fertile field for fear. But fearlessly understanding that we constantly have the Mind of God, well—that’s the whole ballgame!

The highest adventure is to rise from a material view of life and creation to an understanding of divine Love’s constant presence and control over all. 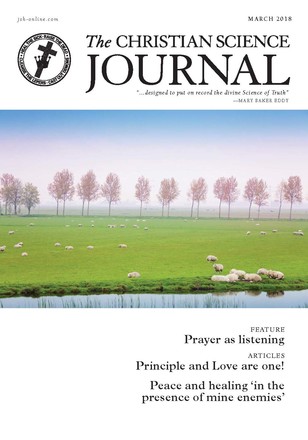