“Suns and planets teach grand lessons,” says Mary Baker Eddy, the discoverer of Christian Science (Science and Health with Key to the Scriptures, p. 240). What might some of these lessons be? A deeper understanding of our solar system and of astronomy can be spiritually instructive. It can serve as a metaphor to help us better understand God and creation. So, let’s examine our solar system from the point of view of several famous astronomers and scientists, and see what can be learned.

Let’s begin with Ptolemy. In the second century, he came up with a model of the solar system, based on Earth as its center. And, because of his erroneous point of view, he hypothesized the existence of what are called “epicycles” to explain the motion he saw of planets.

Like astronomers before him, Ptolemy observed that over time, planets changed their positions relative to the stars, moving across the night sky from west to east. However, he also observed that there are times when the planets retrograde—move backward—from east to west. Ptolemy’s intricate, complex, and ultimately erroneous system of epicycles explains this retrograde motion when Earth is used as the center of the solar system.

Ptolemy’s explanation was incorrect. Planets don’t have epicycles, and this becomes obvious when the proper center or focal point of the solar system is understood. Eventually, in the 16th century Copernicus realized the sun is the center of the solar system. However, Copernicus needed to rely on scientific calculations instead of his material point of view, since from our vantage point we still observe retrograde motion of the planets.

Scientists make continual progress over time toward understanding Truth. Eddy says that eventually “the astronomer will no longer look up to the stars,—he will look out from them upon the universe …” (Science and Health, p. 125). Imagine an astronomer is on the sun looking out “upon the universe.” He does not see retrograde motion of the planets, but sees that the planets progress on constant, continuous paths around the sun, never stopping or reversing their course. In this representation, the planets are viewed from the sun’s perspective, the center of the solar system. And so it is simple and easy to understand the actual motion of the planets.

When God is known to be the center and originator of all, we understand that there are in truth no epicycles of evil, but only constant good.

Ptolemy misidentified the center of the solar system and thus made what is actually a simple, orderly system seem very complicated and erratic, adding epicycles on top of epicycles to explain simple planet movement. Likewise, we can make our lives complicated and discouraging when we misidentify the focal point of our lives as ourselves or other people instead of God, Truth. We can grow discouraged by what at first appears to be progress in our healing efforts and spiritual understanding, only to be followed by apparent setbacks. We might look at our lives and see only confusion and hopelessness. We may even postulate that there is no higher power or that God left and that we must depend on our own cleverness.

In this complicated model of life, illness, wars, disasters, and accidents seem integral to existence. Deception, falsehoods, immoral and unethical behavior, selfishness, and biological drive are seen as the means for the fittest to attain wealth, power, purpose, and privilege. You might say “epicycles of evil” are a normal part of this life model.

Eddy says, “The cycle of good obliterates the epicycle of evil” (The First Church of Christ, Scientist, and Miscellany, p. 270). When God is known to be the center and originator of all, we understand that there are in truth no epicycles of evil, but only constant good. Yet, if we still see life through the point of view of earth-based, material opinions and perspectives, we will experience “retrograde motion.” God will seem arbitrary, occasionally intervening, and incapable of controlling evil.

So, we need a change in perspective. We need to understand that Spirit, God, is at the center of the universe, and to “stand” there with Him and view life from how Spirit sees it. Eddy says, “An improved belief cannot retrograde” (Science and Health, p. 442). When life is seen from the right point of view, then our “improved belief” of life cannot even appear to recede or backtrack. We can only move forward to experience God’s continuous unfolding of good.

Jesus healed by understanding this true, scientific perspective. As Eddy explains, “Christianity as Jesus taught it was not a creed, nor a system of ceremonies, nor a special gift from a ritualistic Jehovah; but it was the demonstration of divine Love casting out error and healing the sick, not merely in the name of Christ, or Truth, but in demonstration of Truth, as must be the case in the cycles of divine light” (Science and Health, p. 135).

Christian Science shows clearly that God has given us only “cycles of divine light”—only harmonious, progressive action that has been unimpeded and unassailed, even if we once held to a limited material perspective. The continuous unfoldment of good in our experience has been and always will be eternal. It was only a false earth-based perception that fooled mortals into believing otherwise.

This knowledge is where Christian healing happens. It is where we see and understand God’s complete care for us and the perfect harmony of our lives and the universe.

I have found that when my life seems complicated or mistakes keep on repeating, then I need a change of perspective. I need to get myself out of the center of my view of life, and to see that God is at the center, to understand what He sees and knows. This has time and again lifted me out of illness, self-pity, and grief, and has given me new, inspired direction for my life.

We are not in an “epicycle of evil.” We have the gift of God, Truth, to see life from Truth’s vantage point, where we find our lives are wholly good. This God-centered perspective lets us see creation as He made it: entirely and always perfect. 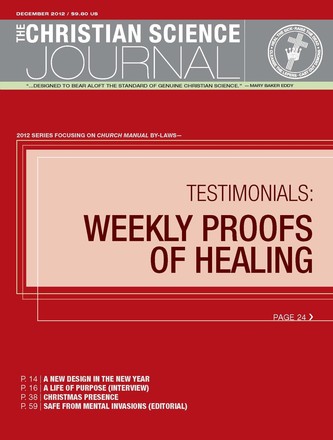 Do the "beautiful" things in our human experience draw us closer to God?

Why do Branch churches have more requirements than The Mother Church membership application?

Does the Manual By-Law, Prayer in Church, apply to nonmembers?

An eye to Africa

No match for the winds of Spirit

Can I attend my own association but also attend another one in the same year?

A new design in the new year

A life of purpose

Prayer during pregnancy and childbirth