For the many blessings which I have received since taking up the study of Christian Science I am most grateful, and I take this opportunity to share some of these blessings with others.

My first healing occurred about eighteen years ago. Although I was brought up in an orthodox church, its religious teachings never appealed to me. I had been an attendant at the Sunday school and had been approached by the local clergymen many times to join that denomination, but there seemed to be inconsistency in its teachings and a lack of practical application of the Bible as taught by Jesus. Perhaps, therefore, I was ready for Christian Science. I was not particularly interested in the teachings of this Science, but, having from time to time accompanied a friend to services at The Mother Church, The First Church of Christ, Scientist, in Boston, Massachusetts, I had unconsciously memorized "the scientific statement of being," which appears on page 468 of Science and Health by Mrs. Eddy and is read at the Sunday services of every Christian Science church and society. When my knee joint became dislocated I found myself repeating this statement, and the joint slipped back into its natural position. The healing was permanent and neither splints nor bandages were applied. It was then that I began to realize I had found the "pearl of great price."

I am very grateful also for another healing, which occurred several years ago. I began to experience severe pain in the leg. For twenty-four hours I worked as we are taught to do in Christian Science. There being no relief, a practitioner was called, but at the end of forty-eight hours there was no abatement of the suffering, which seemed unbearable at times. It was at this point that I felt a strong urge to go to the Christian Science Benevolent Association Sanatorium. A call was put in and I was told to come the following day. After my first night at the Sanatorium the pain vanished. The limb was paralyzed from the knee to the foot, but in less than a week this also was healed and I was enabled to return home and walk with complete ease and freedom.

A general awakening resulted from this healing—an awakening to the fact that Truth is all that endures, regardless of the seeming tenacity and continuity of pain or discord. Whether pertaining to an individual or involving a nation, inharmony cannot endure when the truth is persistently and consecratedly applied. These words of our beloved Leader, Mrs. Eddy, in "The First Church of Christ, Scientist, and Miscellany" (pp. 149, 150) were, through this experience, made my own: "Remember, thou canst be brought into no condition, be it ever so severe, where Love has not been before thee and where its tender lesson is not awaiting thee."

The love, joy, co-operation, consideration, and compassion which permeate the atmosphere of the Sanatorium furnish one not only with inspiration but with an incentive to go back into the Field and prove that this atmosphere of thought is capable of demonstration in our homes and churches.

This testimony would be incomplete without gratitude to God for my having had the experience of class instruction. I am also most grateful for membership in The Mother Church and in a Christian Science Society, and for the privilege of serving God and the Christian Science movement in the way of His appointing.—(Mrs.) Doris P. Woods, Peterborough, New Hampshire. 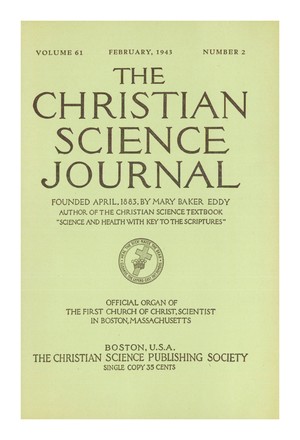 THE "FOURTH DIMENSION OF SPIRIT"

THE BEAUTY OF INHERITANCE

THE SPEEDING OF VICTORY

THE OVERCOMING OF FEAR

MORNING BY THE SEA