A healing I once had taught me a vital spiritual lesson and has enabled me to pray more wholeheartedly and clearly for those struggling with illness in the world today.

At the time I was taken ill with a fever and a cough, so I called a Christian Science practitioner to pray for me. I recovered to the point of being up and out of bed; however, the cough persisted.

Weeks went by with no apparent change. Then one day I was sitting quietly enjoying the pristine beauty of the morning. I was still coughing but was praying deeply for complete healing. In the quiet I became aware that a tune was repeatedly coming to me. It was Hymn 195 from the Christian Science Hymnal, which begins,

Not what I am, O Lord, but what Thou art;
That, that alone can be my soul’s true rest;
Thy love, not mine, bids fear and doubt depart,
And stills the tumult of my troubled breast.
(Horatius Bonar)

I realized that this was a message coming to me from God, and I gratefully rejoiced in the idea that God’s love was stilling the tumult in my chest.

Christian Science explains God not as a person but as infinite Love itself. Knowing that the divine nature of Love is to protect, embrace, and bless all creation, including me, brought comfort. But the healing truth God was imparting to me became even clearer with the next line of the hymn: “Girt with the love of God, on every side, / I breathe that love as heaven’s own healing air.”

Tears filled my eyes as I felt God’s precious love enfolding me, accompanied by a tenderness I had never known before. I kept repeating, “Why, I’m breathing God’s love! It’s all there is, just love! I live and breathe nothing but the atmosphere of Love, and this Love heals!” This was a completely original concept to me, and I was deeply inspired by it. And in that sacred moment I was completely healed of the cough, which never returned.

Later, I came to see that what had healed me was the Holy Ghost. Christ Jesus promised its coming, calling it “the Comforter.” Today it is operating worldwide as Christian Science. The Holy Ghost is the healing activity of the Christ, spiritual Truth, which moves thought. Mary Baker Eddy, who discovered Christian Science, described the essential function of the Holy Ghost in healing this way: “The effect of this Science is to stir the human mind to a change of base, on which it may yield to the harmony of the divine Mind” (Science and Health with Key to the Scriptures, p. 162).

A healing of Mrs. Eddy’s private secretary, Calvin Frye, illustrates the point that thought must move to a change of base for healing to take place. According to the reminiscences of Clara Shannon, a fellow household worker of Mr. Frye, he was once found lying on the floor of his room, apparently lifeless. Mrs. Eddy was called, and she spoke to him very tenderly of the truth of his relationship to God. But when he opened his eyes, “most severely she rebuked the error that seemed to be attacking him.” She persisted in trying to rouse him.

Finally, she spoke to him of some happy memories that they had shared, and he laughed. After speaking to him some more about the truth, she said he could return to his room. Clara Shannon notes, “She explained to me that when you speak the Truth to anyone, if the Truth you speak causes him to laugh, cry, or get angry, you have reached the thought that needed correction” (see We Knew Mary Baker Eddy, Vol. II, Expanded Edition, pp. 210–211).

For healing to take place, thought must move off of what it is fixated on and yield to the Mind of Christ.

For healing to take place, thought must move off of what it is fixated on and yield to the Mind of Christ, which is God. What moves thought to accept the healing Truth is the Holy Ghost—not mere human effort, the human mind, or human will.

Jesus’ raising of Lazarus from the dead is a stellar example of the Christ moving thought through the operation of the Holy Ghost or divine law. To the people who had buried Lazarus in the tomb, Jesus said, “Take ye away the stone” (John 11:39). In her Miscellaneous Writings 1883–1896, Mrs. Eddy asks, “What is it that seems a stone between us and the resurrection morning?” She then answers: “It is the belief of mind in matter” (p. 179).

Jesus’ command to take away the stone symbolized moving the common thought of those grieving for Lazarus off of the belief of life in matter. The scriptural account tells us, “And he that was dead came forth, bound hand and foot with graveclothes: and his face was bound about with a napkin. Jesus saith unto them, Loose him, and let him go” (John 11:44). Once again the Holy Ghost relieved the so-called human mind of its entrapments of believing life to be in matter, ushering it into the true sense of being in Spirit.

It would not be long before Jesus was to prove this law of Life for himself as well. The Bible says of the third day after his crucifixion, “And, behold, there was a great earthquake: for the angel of the Lord descended from heaven, and came and rolled back the stone from the door, and sat upon it” (Matthew 28:2).

To me, the angel signifies the power of the Holy Ghost to free consciousness from its self-imposed restrictions and to sit in triumph over the belief of mind in matter, for all time and for all mankind.

Christ Jesus always spoke with the authority of the Holy Ghost. His healings were so numerous that it is written, “And there are also many other things which Jesus did, the which, if they should be written every one, I suppose that even the world itself could not contain the books that should be written” (John 21:25).

Christ-healing is still taking place in the world today through the Comforter, divine Science, which Jesus promised would be with us forever. The conviction that matter has life, truth, intelligence, and substance is what needs to move, so our thought can instead rest on the hallowed, immovably fixed ground of Spirit as All-in-all.

As a follower of Christ, Mrs. Eddy proved over and over the power of the Christ, Truth—the Holy Ghost—to rouse and move thought off of its preoccupation with the body and move it forward to accept infinite Truth and Love, and the healing they bring. This was what happened to me. The tears that flooded my eyes were due to the stirring of the Holy Ghost in my heart. My thought had moved! To this day when I sing that hymn my eyes still fill with tears of gratitude for this healing and for the understanding of God’s all-encompassing love that accompanied it, which is completely available, right here and now, to heal all mankind.

How grateful to God we can be for giving the world Christ Jesus, who walked in the way of spiritual healing and showed us how to do so as well. And for Christian Science, which is still proving today the presence and healing action of the Holy Ghost. 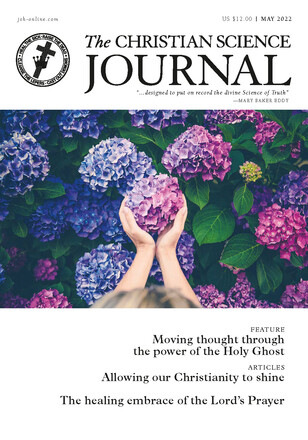 Moving thought through the power of the Holy Ghost

Getting a better sense of the nature of life

Allowing our Christianity to shine

By The Committee on Publication | May 2022

The healing embrace of the Lord’s Prayer

A letter from God to you

Seeing through the eyes of Love

Freedom from pain and inflammation

By Cynthia Deupree with contributions from Madeleine Banta | May 2022

Enough is a lot!

No more anger on the road