In today’s world, many feel challenged by a wide range of demands placed on them—family, work, school, finances, etc. No wonder we hear the phrase “stressed out” so often.

Stress is a belief in limitation—limited time, limited ability, and limited capacity to cope with the demands of the hour. The word stress is originally defined as “the effect of two opposing forces.” If we place both hands in front of us and push them together, palm to palm, we build up a stress called pressure. Or if we lock the fingers of both hands and try to pull them apart, we build up a stress called tension.

So a condition called “stress” is based on the theory that there are two forces working against each other.

In her discovery of Christian Science, Mary Baker Eddy shed light on the fact that there cannot be two opposing forces—because there is only one force, God. And being the one and only force, God is totally unopposed. There is no “opposite” to pull or push against God. To know and understand this manifests in tremendous freedom, because instead of various so-called “mental forces” pressing and pulling us in all directions, we realize that all the power in creation is generated by the one and only source, God.

Newton’s Third Law of physics states, “For every action, there is an equal and opposite reaction, equal in force and opposite in direction.” This implies that for every sunbeam there is a “dark beam,” equal in force and opposite in direction. But darkness is not the presence of something—it is the absence of something. The absence of light, called darkness, cannot oppose light. The absence of truth, called error, can no more oppose truth than darkness can oppose light. That which is not cannot oppose that which is.

The basic principle of Christian Science establishes that error—anything unlike God, good—is an absence of Truth, and therefore unreal. So we don’t deal with conflicting forces; rather, we refute the lie that conflicting forces could possibly be real. How do we refute a lie? By knowing the truth. Jesus stated, “Ye shall know the truth, and the truth shall make you free” (John 8:32). To reject the lie is to eliminate all there is to a problem.

So how do we make all this practical? How do we deal with deadlines, conflicting priorities, and a sense of powerlessness? We can start by asking ourselves, “Am I accepting more than one force, one cause?” It is then that we can affirm that because there is only one Mind, there is only one lawgiver. Tension and strain cannot exist in the inseparable and harmonious relationship that exists between God and His idea, man.

When we eliminate the false supposition of two opposing forces, we experience freedom.

Oh, how often it is “time” itself that appears to be the obstacle! We feel under stress because we seem to have too much to do, but not enough time to do it. Here we see the strong relationship between stress and time constraints. The Christian Science textbook, Science and Health with Key to the Scriptures, by Mary Baker Eddy, defines time as “mortal measurements; limits, in which are summed up all human acts, thoughts, beliefs, opinions, knowledge; matter; error; …” (p. 595). So if time is defined as error—the absence of reality—it can have no impact on our experience. In divine Mind, there is no stress to cope with, no tension going on, and no pressure to overcome. When we eliminate from our consciousness the false supposition of two opposing forces, we experience freedom.

Where all the turbulence appeared to be, right there was God’s love upholding him, protecting him, maintaining his perfect being. Jesus was ever aware that he lived, moved, and had his being in divine Love (see Acts 17:28).

Following his example, we, too, can see that disorder, stress, and frustration are only a false belief—no part of our true experience. And as with all healing, it’s not actual “stress” that we correct, but rather the belief that stress is real.

As a Christian Science practitioner, there have certainly been moments when I felt stressed when several people needed immediate prayer support at the same time. It was so helpful to remember Jesus’ affirmations: “I can of mine own self do nothing” (John 5:30), “The Father that dwelleth in me, he doeth the works” (John 14:10). Note that Jesus did not say he couldn’t do anything. In fact, he did quite a lot! Once he was free from identifying as a human self with human responsibilities, it set him free to recognize that it is the divine Truth that destroys the lie—and heals.

In Science and Health we read, “All that really exists is the divine Mind and its idea, and in this Mind the entire being is found harmonious and eternal” (p. 151). This is exactly where we exist, like Jesus, as Mind’s idea. It is living those words of Isaiah: “Thou wilt keep him in perfect peace, whose mind is stayed on thee” (Isaiah 26:3).

What can keep us from experiencing this “perfect peace”? Fear. Fear that the problem is real—that we lack sufficient understanding to meet the challenge, or that we will lose out, let someone down, fall short, not solve something. In other words—fail.

When we feel we are confronted by what seems a relentless push and pull of circumstances and demands, we can be comforted by the Master’s benediction that stills all stress and anxiety. He said, “Come unto me, all ye that labour and are heavy laden, and I will give you rest” (Matthew 11:28).

Yes, we may be faced with what look like heavy workloads, impossible deadlines, physical problems, financial pressures, family and relationship conflicts. But in the words of the Apostle Paul, we too can say, “None of these things move me” (Acts 20:24). In other words, we can be “unmoved” by the false suggestion of two powers in opposition to one another, whether related to the body, business, family, nation, church, etc. Just like Jesus, we can demonstrate unruffled calm, complete confidence in God’s love for each one of us, and a sense of joy and gratitude for the harmony and success that are ours by divine law.

So back to that question: “Am I accepting more than one force?” Where there appear to be two opposing forces resulting in pressure or tension, claim that there is only one force, one power, one omnipresent God. Reflecting God’s perfection, you are exactly where God would have you be, doing what God would have you do, in harmony with divine Principle, knowing no taskmaster called “time.”

The words of a hymn assure us:

Drop Thy still dews of quietness,
Till all our strivings cease;
Take from us now the strain and stress,
And let our ordered lives confess
The beauty of Thy peace.
(John Greenleaf Whittier, Christian Science Hymnal, No. 49) 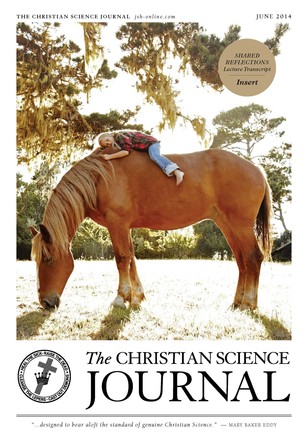