Every Christian Scientist is learning the wonderful lesson that the determining power of his human experience always lies in his own hands.

What does this mean? It means that a suggestion of evil never comes that cannot be annulled. Mary Baker Eddy once wrote, "Error comes to you for life, and you give it all the life it has"' (Twelve Years with Mary Baker Eddy by Irving C. Tomlinson, p. 85). Within our own thinking, at any moment, and at every moment, lies the puissance of victory. Our capacity for success, for healing, for freedom and dominion, can never be taken from our own hands.

The evil thinking customarily termed malpractice by Christian Scientists is not primarily harmful because of what others may or may not be thinking, whether it be the general opinion of suppositional mortal mind called "laws of health" and penalty therefrom, or whether it be the disapproval, criticism, envy, hatred, or even malice of another's opinion of us or our actions. Nor does false thinking gain validity because of the belief that it has an organization or a history. All there is to malpractice, ignorant or malicious, general or specific, as far as we are concerned, is our admission of it. Suffering from malpractice arises from what one thinks about what others think! It always requires co-operation on our part before malpractice can exert, even in belief, any influence whatever. We ourselves set the battle in array. Alertness can often prevent the battle, and can always stop the battle.

The only real power is God, good, divine Love. The only real influence is that animus which has its source in divine Love and therefore springs from Love alone. Anything that may seem in belief to arise against our welfare first requires our consent, our answering fear and acceptance, to connect it with ourselves.

The story of David and Goliath is helpful to consider. Goliath illustrates what today we would call the bullying threat of material sense, of aggressive mortal mind. David illustrates the power of the Christ in the Old Testament narrative. The boastful threat by Goliath summed up what he would do and the consequences thereof with one significant sentence, but at the same time disclosed tellingly where the initiative really lay (I Sam. 17:10): "Give me a man, that we may fight together."

Mortal mind says: "Give me a man, on my terms, from my standpoint—material, mortal, with certain abilities and certain disabilities, all materially measured and subject to certain common and inevitable mortal possibilities. Give me this man by your own consent!" Consent to the suggestion that there is such a mortal man, and we have indeed set the battle in array "that we may fight together." For the battleground is our own false belief in dualism, the supposition that man is both mortal and immortal, subject to good, but also susceptible to evil, part material and part spiritual. But refuse to respond to mortal mind's proffered suggestion: refuse to think of yourself or anyone else as diseased, evil, aging, poor; refuse to dishonor God by believing that any other man but His man, His perfect expression, has ever been created or exists now, and where is there a man who is either the victim or the instrument and tool of malpractice?

The false personal concept is all that suffers the malpractice. In fact, it is malpractice itself. The remedy is to cease thinking in terms of personal sense, to cease believing that man is a material person, who can act or be acted upon in terms of personal sense. Man is Mind's divine idea, Mind's own reflection, never a state of deflection. Divine Mind alone is doing the knowing, the reflecting, the expressing, and man is the term for that which is thus divinely expressed.

Error is always belief, false suggestion, and only suggestion. It is always mortal mind talking about itself, trying to get us to call it "myself" and thus to give it life and identity which it does not inherently have. The sly attempt by mortal mind is always to get belief accepted as actual condition. If it can escape correct classification as belief by fooling us into accepting it as condition (whether it be one's physical condition or financial condition, a patient's condition or the world's condition), then we are fooled into mesmerizing ourselves. We are kept looking up the wrong tree for the real culprit, which is always mortal mind suggesting that something is wrong. Belief may say, "I am afraid because I feel such and such a pain in my body." But actually this is only suggestion, that is, mortal mind talking about its own fear, its own inherent disquiet and apprehension, its own sense of destructibility. And we must first identify the suggestion with ourselves, through accepting its fear as our fear, before we can seem to feel the pain or other so-called evidence.

The great, immediate, unfailing remedy is to remain unmoved by being alert enough not to descend to this mortal basis, even when it is clamoring for our acceptance. Thus we learn triumphantly that it is not "condition" at all, but only suggestion, false belief, no part of God's being and hence no part of our real being.

So-called mortal mind is from the outset necessarily a state of unconscious malpractice, for it is based upon the falsity that matter can think, whereas according to the teaching of Christian Science matter is inert and mindless. While believing in matter, we malpractice upon ourselves and others. The moment we perceive through recognition of the allness of Spirit that there is no matter, we are close upon the invaluable discovery that there is no mortal mind. In a statement worthy of deepest consideration, our beloved Leader says (Miscellaneous Writings, p. 174). "Matter is a misstatement of Mind." Here is real security. It brings us face to face with the basic fact of being; namely, that Mind is God and God is All-in-all. The control, therefore, safely and forever lies in the indivisibility of divine Mind and its idea. Malpractice of every sort is disarmed by the acceptance and understanding of that fact. Indeed, as Mrs. Eddy states in "Science and Health with Key to the Scriptures" (p. 319), "Mystery, miracle, sin, and death will disappear when it becomes fairly understood that the divine Mind controls man and man has no Mind but God."

This article is included in:
1953 - PAMPHLET 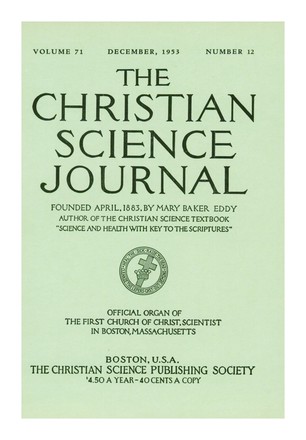 GOING ALL THE WAY

THERE IS LIGHT IN YOUR HOUSE

ESTABLISHING THE TRUE THOUGHT WITHIN

THE MENTAL ORIGIN OF DISEASE

OUR REASON FOR GRATITUDE

FROM GLORY TO GLORY

He Worketh Signs and Wonders

TURNING BACK TO GOD