As a Christian Science chaplain in the United States Army, I was in the country of Jordan, ministering to soldiers in my unit. Several asked if I would baptize them in the Jordan River, where the Bible says Jesus was baptized. I didn’t have long, since I was visiting the country only for a few days before returning to Kuwait, where I was officially deployed.

These soldiers were deeply committed to their Christian faith. For them, the Jordan River was a holy place. One of them had never been baptized and yearned for the experience. The rest desired what many Christians would call a “believer’s baptism”—getting baptized as an adult. As their chaplain, I felt honored to be asked to perform this sacrament. However, pandemic lockdowns prevented us from proceeding. I promised the soldiers that when the restrictions were lifted, I would try to return to Jordan and baptize them. (The US Department of Defense expects Christian Science chaplains to perform Protestant Christian ministry in the military, as well as providing for the spiritual needs of soldiers from diverse religious backgrounds. This requirement affirms the Christianity of Christian Science. In my training to become a chaplain, I had prepared to baptize soldiers, but I never imagined I would do so in the Jordan River.)

In the six weeks that followed, I thought and prayed about baptism more deeply than I ever had before. As I pondered the meaning of baptism, I recognized that for many Christians baptism is a holy rite of passage signifying spiritual rebirth, a purification and transformation of one’s life by God’s saving grace, as revealed through Christ Jesus. I treasured the spiritual significance of baptism in much the same way as my fellow Christians. While Christian Scientists don’t typically carry out the ritual of immersion in water, they do believe wholeheartedly in the importance of baptism as a spiritual experience. I thought about John the Baptist’s teaching in Scripture, “I indeed baptize you with water unto repentance: but he that cometh after me is mightier than I, whose shoes I am not worthy to bear: he shall baptize you with the Holy Ghost, and with fire” (Matthew 3:11).

It’s this baptism in the Holy Ghost, or “Holy Spirit” as translated in other Bible versions, that Christian Scientists wish to receive. This baptism by fire is a burning up of all that’s impure or sinful in one’s life. What’s left is what fire can’t touch—one’s pure heart, the natural expression of one’s true and innocent spiritual nature as the good and holy child of God.

Such spiritual baptism isn’t limited to a one-time ritual. It’s going on all the time. Anyone who is sincerely trying to follow the teachings and example of Jesus is always endeavoring to live a purer life, and God works with them to this end.

Mary Baker Eddy, the Founder of Christian Science, gives a spiritual definition of baptism in the Glossary of the Christian Science textbook: “Purification by Spirit; submergence in Spirit” (Science and Health with Key to the Scriptures, p. 581). And the textbook addresses how this is meant to be transformative: “Through repentance, spiritual baptism, and regeneration, mortals put off their material beliefs and false individuality. It is only a question of time when ‘they shall all know Me [God], from the least of them unto the greatest’ ” (p. 242).

Baptism is ultimately about letting go of a sense that one’s identity is locked up in a material body, and discovering and embracing one’s spiritual identity as created by God. That truly changes a life forever.

As I prayed, I found myself yielding anew to my own baptism in the Holy Spirit. In fact, I’m convinced this is what made it possible for me to return to Jordan at all.

Once pandemic restrictions were lifted, I requested a return flight. The coronavirus rules required me to fly on a Monday if I wanted to avoid an automatic seven-day quarantine. Monday flights were regarded as the only “clean” flights. But the week I tried to go back to Jordan, I got bumped from the Monday flight. A second “clean” flight was added that week only, to fly on Thursday. I scheduled the baptisms for that upcoming weekend. But late Wednesday night I learned that my Thursday flight had unexpectedly been canceled. Because of mission requirements in Kuwait during the rest of my deployment, I needed to get to Jordan that week or I wouldn’t be going back at all.

Spiritual baptism isn’t limited to a one-time ritual. It’s going on all the time.

That night I went to bed in humble prayer. I found myself yearning to feel cleansed and purified anew by Spirit, God. The deployment had been extremely stressful. I had been working nonstop, and I was far from home and missed my family. I had struggled to always keep the most spiritually uplifted thought. So that night, with my trip in doubt, I just quietly surrendered to my own baptism—knowing that I didn’t need to be at the Jordan River but could submerge myself in God’s presence right then and there, because God is infinite and always available as Spirit, divine Love. I began to feel a spiritual refreshing of my heart. I had an intuitive feeling that somehow, even though there were no more “clean” flights to Jordan that week, things were going to work out.

The next day, Thursday, I went about my day peacefully. By mid-afternoon I learned my unit had managed to get me added to a flight the next morning! I found out that a general was going to be on this plane. That meant it was guaranteed to fly, but by all merely human assessments I should not have been allowed on the flight. I was a captain, and my rank didn’t come close to authorizing me to fly with a general. To this day I don’t know how I was granted permission, but I was. I gave gratitude to God for this remarkable provision.

I thought I was set to proceed with the baptisms, but several hours after arriving in Jordan I learned that protests planned for that upcoming weekend throughout the country threatened to shut down any off-post travel, including visits to the Jordan River. The protests were to be in response to the latest conflict between Israel and Hamas, which had broken out over the previous two weeks and had seen the worst fighting between them in seven years. As late as Thursday, the day before I flew to Jordan, there was still no sign of a cease-fire.

In my prayers prior to travel, I felt the baptisms were, in a modest way, part of something much bigger. Jesus’ baptism at the Jordan River—and in the Holy Spirit—was at least in part about uniting all people under the umbrella of God’s love. Christians recognize that Jesus’ mission was to both Jews and Gentiles. Because he was the Prince of Peace, his baptism was a call to peace on earth. So I didn’t think it was a stretch to feel that baptisms in the place where Jesus was baptized should symbolically serve as a call to peace for the region—for everyone to be reborn spiritually and awaken to the unity we all share as God’s children.

As I sat with soldiers in Jordan that Friday evening, some of whom had given up on the baptisms taking place, none of us knew that a cease-fire between Israel and Hamas had in fact been announced that morning while I was en route to the country. The protests that had been scheduled to occur that weekend across all of Jordan were called off. Once we learned this happy news, we rejoiced!

The Jordan River is a demilitarized zone, forming part of the border between Israel and Jordan. As I proceeded with the baptisms, armed guards stood on both sides of the very narrow river. In the middle of the river was a no man’s land. But the baptisms transcended any sense of conflict and affirmed the promise of peace and harmony.

I opened the baptismal ceremony by reading the story of Jesus’ baptism from the Gospel of Mark, which was especially powerful to read aloud while standing in the very spot where the story took place. I then shared some thoughts with the soldiers about baptism and how I hoped they would have many spiritual baptisms in their future. I then got into the river and performed the sacrament for one soldier at a time. Immediately before I baptized each person, I spent a quiet moment standing face to face with them in the river. I asked if they would commit to being a healing presence in the world, as Jesus expected his disciples to be. All joyfully agreed they would.

These baptisms took place both in water and in the Holy Spirit. All of us participating felt the inspiring, transforming touch of the Christ that day. And I felt hope that the spiritual regeneration that was occurring would help demonstrate on earth the rule of God’s harmony, unity, and love.

May each one of us feel God’s redeeming grace through our own baptism, or immersion, in the Holy Spirit, that we might live a new, uplifted life and bear witness to God’s peace and humanity’s unity in the world. 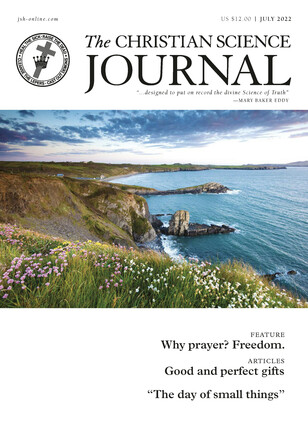