In the Preface of Science and Health with Key to the Scriptures, the book that sets forth the divine Science of Mind-healing that Jesus practiced, Mary Baker Eddy wrote, “Future ages must declare what the pioneer has accomplished” (p. vii). This editorial launches an occasional series that looks at how the life and ideas of this extraordinary woman have pointed the way, and continue to point the way, to follow Christ in our individual and collective progress Spiritward.

At the beginning of the 20th century, Mary Baker Eddy was one of the most recognized women in America. Her discovery of Christian Science just over thirty years earlier had not only led her to write Science and Health but also brought about thousands of instances of modern-day Christian healing; the organization of The First Church of Christ, Scientist, in Boston, along with hundreds of branch churches; and a publishing company producing a variety of publications. These undergirded a movement that crisscrossed the United States and was gaining interest abroad.

You could say there was a certain pragmatism to Mrs. Eddy’s insistence that she be seen as the Leader of the movement she birthed, not only in her day, but beyond. Her work had faced considerable plagiarism and appropriation. Referring to Science and Health she said, “Other works, which have borrowed from this book without giving it credit, have adulterated the Science” (p. 457). She saw her textbook as “the voice of Truth to this age,’’ which contained “the full statement of Christian Science” (p. 456), based as it was on her remarkably successful healing work across the decades, and her singular desire to emulate Christ in all his ways.

She did not shy away from claiming that her revelation alone illuminated both true Christianity and the Science of Jesus’ teachings and practice, and that it was indispensable in gaining a true view of God and His creation—especially for healing. “Christian Science does honor God,” she wrote, “as no other theory honors Him, and it does this in the way of His appointing, by doing many wonderful works through the divine name and nature” (Science and Health, p. 483).

Certainly, a practical theory of God, a new way of thinking, a revelation, was needed in 1866 when this discovery of Christian Science first gleamed on the horizon. Genuine Christianity, as taught and exemplified by the master Christian, Jesus, had been overshadowed by centuries-old well-meaning theologies ultimately built more on religious scholarship and training than on Christly living and works. Spiritual healing of disease and sin had, in fact, been all but lost.

So when Mrs. Eddy turned to Jesus’ teachings after what seemed to be a life-threatening injury and found not just spiritual comfort but physical cure, her mission—and the necessity for sharing her discovery with a world in need of redemption—came profoundly into focus. In her own words, “I knew the Principle of all harmonious Mind-action to be God, and that cures were produced in primitive Christian healing by holy, uplifting faith; but I must know the Science of this healing, and I won my way to absolute conclusions through divine revelation, reason, and demonstration” (Science and Health, p. 109).

She had found the lodestar she was seeking: Christ’s Christianity. Mrs. Eddy knew it was the only way there was to fully follow Jesus. And when she found it, she had all she could do to write down the revelation as it poured into her waiting thought. Ultimately, in authoring Science and Health, she articulated and elucidated these “absolute conclusions” in a language that was both spiritually scientific and Christianly compassionate, reaching beyond her life and her lifetime, leading human thought to its Savior, divine Truth and Love.

Jesus forged the path, but it was this Science of Christ that came as revelation to Mrs. Eddy that would give generations of readers the ability to follow that path out of the belief of life in matter and materialism into an ever-new, ever-expanding life in and of Spirit. And everywhere readers looked, in every arena of human endeavor, including science, theology, and medicine, divine Science would be in advance of even the most cutting-edge discoveries, gesturing toward this new-old paradigm of God’s kingdom actually come on earth, as Jesus repeatedly announced. He had called this revelation “the Comforter” and explained to his followers for all time that when this “Spirit of truth, is come, he will guide you into all truth: for he shall not speak of himself; but whatsoever he shall hear, that shall he speak: and he will shew you things to come. He shall glorify me” (John 16:13, 14).

All these observations of Mrs. Eddy’s career could suggest an author and religious pioneer simply wanting credit given where credit was due. But as part of the larger constellation of her teachings and writings, they bring into focus a revolutionary picture of leadership. Mary Baker Eddy did not set out to be a leader but a follower of Christ. In so doing, she eventually saw her place as Leader, but made it plain that she had been “impelled by a power not one’s own” (Miscellaneous Writings 1883–1896, p. 148) in laying out the Science of Christianity and its church organization. And so, adherents of her discovery, in following her, would not be adhering to a human personality but to the same divine Truth she herself was continually striving to understand and demonstrate. Even still, as she claimed, the discovery and Discoverer could not be separated: “Christian Science is my only ideal; and the individual and his ideal can never be severed. If either is misunderstood or maligned, it eclipses the other with the shadow cast by this error” (Miscellaneous Writings, p. 105).

Those who follow this Science must also gain a just appreciation of its Founder and recognize that Mary Baker Eddy, for all time, is the channel through which this “greatest and holiest of all causes” (Miscellaneous Writings, p. 177) emerged on the human scene. No one else has before or since eclipsed her healing record or her grasp of this Science, except the Way-shower. To follow her lead, is to more fully grasp the path Christ blazed, empowering those seeking Truth to more consistently walk in Jesus’ footsteps and to become a means of healing and redemption for others.

This delicate balance of tireless Christian follower (including demonstrating the healing power of divine Truth) and humble spiritual Leader found its final expression in a public statement that appeared near the end of her life, both showing her tender desire for the salvation of the human race and pointing to her own indispensable place in God’s plan. She wrote: “When will mankind awake to know their present ownership of all good, and praise and love the spot where God dwells most conspicuously in His reflection of love and leadership?” (The First Church of Christ, Scientist, and Miscellany, p. 356).

As you explore this magazine over the coming months, you’ll want to keep an eye out for this series that delves into the way Mary Baker Eddy’s discovery both impacts and leads thought in arenas ranging from scientific progress to art to parenthood to healing. And you’ll hear from present-day Christian Scientists at work in these fields about how the writings of the Discoverer and Founder of Christian Science continue to lead them to inspiring and transformative views of God, identity, and the nature of the universe.

And is it any wonder? Decades after her discovery, the Leader of the Christian Science movement spoke humbly and frankly when she explained that even she was still learning from the very book she’d written as a “scribe under orders” (Miscellaneous Writings, p. 311). Even as its revelator, Mrs. Eddy, too, was led by this Science. How could we ourselves want for any more effective guide? 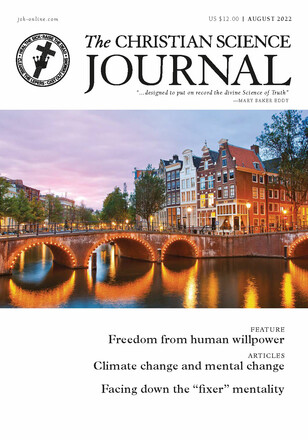 The pure river of the Word

Facing down the “fixer” mentality

Healing of anemia during pregnancy

Protected on the road

Healing at a workplace

The book that found him a job