FROM TIME TO TIME, readers of the weekly Christian Science Bible Lessons and attendees at Christian Science services ask about the use of the King James Version of the Bible in the Lessons. We wanted to share with you the kinds of questions they've asked lately, along with the historical context that has come to light as we've researched questions like the following ones:

1. Mary Baker Eddy quoted from the King James Bible almost exclusively in her writings, including the Christian Science textbook, Science and Health with Key to the Scriptures—but did she ever study, or quote from, modern Bible translations?

Yet Mrs. Eddy not only owned, but studied, a number of versions of the English Bible, including contemporary ones like Rotherham's Emphasized Version, the Revised Version of the King James Bible, Ferrar Fenton's The Holy Bible in Modern English, the Twentieth Century New Testament, the American Standard Version, Weymouth's The New Testament in Modern Speech, and Moulton's The Modern Reader's Bible. And she made notes in the pages of many of these Bibles.

Occasionally, Mrs. Eddy quoted from these contemporary Bibles in her published writings. One of the best known of these quotes is in the "Cross and Crown" emblem on the cover of Science and Health: "Heal the sick, raise the dead, cleanse the lepers, cast out demons." The emblem, taken from Matthew 10:8 of the Revised Version, is on all Mrs. Eddy's other writings as well, and appears in all the religious periodicals she founded. In another significant departure from the King James text, Mrs. Eddy chose the American Standard Version wording of Mark 4:28for the motto of the newspaper she founded, The Christian Science Monitor: "First the blade, then the ear, then the full grain in the ear."

But even though Mrs. Eddy quoted from the modern Bible translations and praised one as "desirable" and "serviceable," she still revered the King James Version most of all. Mary Baker Eddy, Rotherham's Emphasized New Testament, The Christian Science Journal, Vol. 15, February 1898, p. 696 . When a student sent her a copy of the Twentieth Century New Testament, she wrote to him," ... it may surprise you to know that I am not fond of new things unless they are more spiritual than the old." L13053, Mary Baker Eddy to William P. McKenzie, February 20, 1900, The Mary Baker Eddy Collection . And when an eager editor of The Christian Science Journal announced that he planned to use only the new Rotherham Bible in the magazine, Mrs. Eddy made it clear that she didn't agree with this practice.

2. Did Mary Baker Eddy, as the Founder of the Church of Christ, Scientist, require that the King James Version be used exclusively in the Bible Lessons?

In 1895, Mrs. Eddy ordained the Bible and Science and Health with Key to the Scriptures as "Pastor over The Mother Church,—The First Church of Christ, Scientist, in Boston, Mass. ..." And in her Church Manual she predicted that those two books would "continue to preach for this Church and the world." Church Manual, p. 58 . (See also Mary Baker Eddy, Message to The Mother Church for 1901, p. 11.) Yet Mrs. Eddy never named a specific version as the "official" Bible for the Bible Lesson or for church services.

Actually, when the periodical called Christian Science Bible Lessons began publication in 1890, the compilers used the Revised Version for the "Lesson Texts," and included references to other translations as well. (The "Lesson Texts" were roughly equivalent to today's Responsive Readings.) These Bible Lessons came from the ecumenical International Sunday School Lessons and were very different from what's found in the Christian Science Quarterly today. At that time, some Christian Science churches had pastors who preached a sermon at the Sunday services, while other branch churches used these lesson citations as the basis for readings.

The next year, 1891, the "Lesson Texts" shifted to the King James Bible, although there's no evidence that Mrs. Eddy requested the switch. And from that point until the establishment of the current format of the Christian Science Quarterly (with the institution of the 26 Lesson-Sermon subjects) by Mrs. Eddy in 1898, the Quarterly Lessons stayed mainly with the King James Bible. They sometimes did, however, refer to other contemporary Bible translations in the notes that accompanied the Lessons.

From the very start in 1898, the new Christian Science Quarterly Bible Lessons hewed to the King James Version (or Authorized Version) in the body of the sermons, but sometimes used the Revised Version in the Golden Text and Responsive Reading. This continued until several years after Mrs. Eddy's passing, when the Publishing Society Trustees, citing "criticisms" from the field, instructed the Bible Lesson Committee,"... it seems wise to say that, even though infrequently done, it will be better not to quote from Revised Versions."  David Ogden to "Dear Friend," March 19, 1914 .

Some have speculated that these criticisms could have been based on a concern that Christian Science might be considered "unchristian," since most Christians at that time read the King James Version. Official church statements over the years have apparently tried to be faithful to the King James Bible, in light of these concerns, even though studies show that most people today tend to use other versions.

3. Would you consider introducing modern English Bible translations in the Bible Lessons, as a way to keep the church periodicals "abreast of the times"?  Church Manual, p. 44.

Occasionally, though, as in the early year of the Christian Science Quarterly Bible Lessons, using a contemporary English translation might bring special clarity or insight to the Golden Text or the Responsive Reading. In fact, the Trustees of the Publishing Society recently recommended that a modern translation be used for the Golden Text in an upcoming Bible Lesson, and for a Responsive Reading in another Lesson. Ultimately, however, our decision was to stay with the King James wording in these particular cases. More prayer, we believe, and perhaps more thoughtful dialogue on the subject, will reveal whether or not such steps will be helpful to today's readers.

Many Christian Scientists say they feel greatly enriched, just as Mary Baker Eddy did, by studying various versions of Scripture, especially those based on original texts that weren't available when the King James translation was published in 1611. And writers in the Christian Science periodicals frequently quote from these translations. It's true that some branch churches, as well as The Mother Church, have occasionally made use of other versions in scriptural selections or benedictions. It's also true, however, that many Christian Scientists continue to treasure the poetry, ecumenicism, and the spiritual power of the "Authorized" King James Version, as Mrs. Eddy did.

Ultimately, what illumines any translation of Scripture is a reader's spiritual understanding. And in this sense Mary Baker Eddy's book Science and Health has given humanity a "Key to the Scriptures"—an understanding that transforms, and translates, one's view of life from matter to Spirit. This thought-shift enables anyone to read the Bible with inspired vision, with fresh light. In a letter to one of her students, Mrs. Eddy once described the light that Christian Science throws on Scripture, in these words: "When we translate matter into Spirit we shall then have not only the Authorized Version, but the eternal version of the Scriptures. I never read the Bible now without such an illumination that every word of it contains a spiritual meaning."  L13053 .

We value the prayer and consideration that thoughtful Christian Scientists are giving to this subject, and we are especially grateful for the respect and understanding that individuals show to one another as honest perspectives on the subject are expressed. 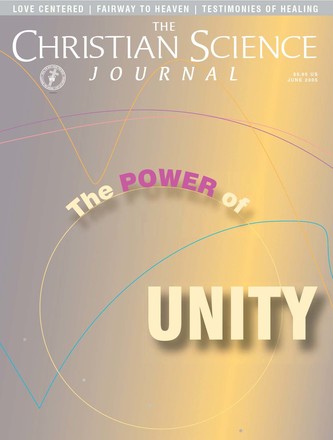 Three men and a mission

Putting it all together

From The Christian Science Board of Directors | June 2005

'We all felt the blessing'

The most natural thing in the world

In the arms of Love

The healing touch of Christ