IN a November, 1908, issue of the Boston Post, an interesting bit of news concerning Mrs. Eddy, the Discoverer and Founder of Christian Science, was published. This item is reprinted in her book "The First Church of Christ, Scientist, and Miscellany" (p. 276) and reads as follows:

"Mrs. Mary Baker Eddy has always believed that those who are entitled to vote should do so, and she has also believed that in such matters no one should seek to dictate the actions of others.

"In reply to a number of requests for an expression of her political views, she has given out this statement:—

"I am asked, 'What are your politics?' I have none, in reality, other than to help support a righteous government; to love God supremely, and my neighbor as myself."

How may a student of Christian Science be guided rightly in politics, especially in times of elections? First, by turning his thoughts to God, the source of all wisdom and goodness, for His direction. Second, he may lend his support by qualifying himself to vote and then exercising this sacred privilege by going to the polls and casting his ballot.

A wise voter will consider the candidates, their parties and platforms, and all issues involved in an election. But one must also realize the importance of prayer, or systematic metaphysical work. This scientific mental work enables one to gain a spiritual understanding of God and His government of man and the universe, the only true government or power.

Prayers for divine guidance should declare the omnipotence, omniscience, and omnipresence of God, good, alone. They should include the realization of His government and thus the consequent nothingness of a so-called evil power. God, Mind, divine Principle, is the only Mind or intelligence of man and governs His idea, man, through divine Science in perfect harmony.

The real man, subordinate to Mind alone, is God's image and likeness; therefore he expresses only the qualities and thoughts of the divine consciousness, such as intelligence, wisdom, spiritual discernment, and love. The spiritual understanding of God and man as revealed by Christian Science and the correct utilization of this understanding will direct the student in making wise decisions in regard to politics, candidates, or elections.

Included in the heart of all Christian Scientists must be unselfed love for God and man. Holding spiritual truths in consciousness and realizing them to be facts, one naturally loves God supremely and his neighbor as himself. The student also loves God when he acknowledges His oneness, greatness, and allness and denies or rejects the supposition that evil minds, influences, or forces have reality or power to govern mankind. And because he understands man's relationship to God as idea or reflection, the student honors and loves God by seeking His guidance and doing His will only.

To be guided by God in elections rather than by the confusing, oftentimes conflicting, personal opinions of other people, the student should heed the wise instruction given in Proverbs (3:6), "In all thy ways acknowledge [God], and he shall direct thy paths."

To love one's neighbors is to identify all men as being in reality spiritual ideas of the one Mind, children of the one God, abiding constantly under His care, guidance, and government. The student who seeks divine direction in politics must realize and understand these spiritual facts of God and man in order to demonstrate them in the selection of candidates who most closely conform to spiritual goodness and perfection.

It is well that students of Christian Science consider the effect that their prayerful individual efforts may have on politics and elections. Metaphysical work undertaken each day, not only for one's own guidance and enlightenment but for the enlightening of the thoughts of all men, is the demand placed on the students of Christian Science today. It behooves each one to pray not only for himself but for the benefit of mankind as well.

The prayers of the student for God's guidance and control of mankind might well extend beyond local and national borders to include all countries and peoples of the world. Indeed, love for God, good, and for his fellow men prompts him to pray daily.

When the individual Christian Scientist thinks more earnestly about elections and politics and prays devoutly, as Christian Science teaches, he is aiding in establishing the government of God on earth, the reign of Mind, divine Love. In this manner he also helps to prevent so-called evil influences from gaining control in the world, from making ingress into governments, and from corrupting the minds of men.

Just as the Christian Scientist must not neglect his prayers for guidance in politics, so he must not neglect the priceless privilege of voting in elections in any country where the privilege is bestowed on those who are qualified. Let each one put aside all aggressive mental suggestions of apathy or indifference to politics and elections. Instead, let him be alert, ever conscious of his privilege and duty to be a public spirited citizen.

Laying aside thoughts that would belittle the effectiveness of conscientious prayers for ourselves and for all people to be God guided in politics, let us recall Christ Jesus' words, "All things, whatsoever ye shall ask in prayer, believing, ye shall receive" (Matt. 21:22). Let us also remember that James said (5:16), "The effectual fervent prayer of a righteous man availeth much." Let us rejoice constantly that we are adherents of a practical, demonstrable religion and that Truth and Love are present to enlighten and guide all men and will eventually free them from ignorance and from all evil influences.

Truly the spiritual understanding of God and man that Christian Science gives the individual enables him to love God supremely, to love his neighbor as himself, and to be God-guided in politics, and thus "to help support a righteous government." 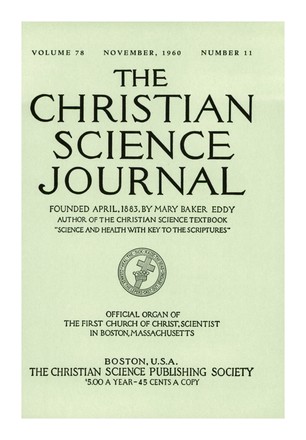 DOMINION IS YOURS TODAY

THE NEED FOR THINKERS

I will sing of the mercies of the Lord for ever: with my...

PROGRESS THROUGH AT-ONE-MENT WITH PRINCIPLE

CHURCH-GOING AND ITS RICH REWARDS

THE DEMONSTRATION OF FREEDOM

"IN RETURN EMPLOY NO VIOLENT INVECTIVE"

WHAT IS GENUINE LOVE?