Traveling from a school located at sea level, I struggled a lot once I arrived at the Christian Science camp for children where I would be working for the summer, which had an elevation level of 9,000 feet. It seemed I had a lot of trouble acclimating, and it became difficult to run and even sometimes walk uphill between camps. I was also struggling with being very out of shape, due to some physical challenges that did not allow me to exercise.

Nevertheless, when it was announced that we would be doing a three-day trip through the Rockies and peaking a 14,000 foot mountain as part of our mountaineering training, I was absolutely elated and didn’t even think about the elevation. As our trip arrived, it became quite evident, however, that I needed to address this physical challenge metaphysically.

Before we left, the counselors going on the trip had an inspirational meeting in which we discussed the idea that God isn’t any less at higher altitudes where the air seems to be thinner. I really tried to hold to this idea during the first part of the hike, as well as just the idea that I had the divine right to enjoy this wilderness experience and grow from it. On the way up, I also prayed with this line from a hymn: “I climb, with joy, the heights of Mind” (Violet Hay, Christian Science Hymnal, No. 136), which I had previously thought about when I ran a half marathon three years earlier. I really tried to hold to this and other ideas that were shared on the climb up to our campsite.

Our first day and a half of hiking was extraordinarily difficult for me, and I found it somewhat alarmingly difficult to breathe. I also felt bad about holding up the group, as I needed to stop frequently to address this challenge. I was very grateful for the encouragement of my group. At one point in the hike, I was between two stellar metaphysicians, who helped me out significantly.

Once we reached our campsite, I was grateful to rest a bit, though I had begun to feel unwell. I tried to pray with the idea that I could not be punished for doing good, but I seemed to feel worse. I was also really concerned that I would be unable to lead backpacking trips with campers, peaking 14,000 foot mountains later in the summer.

Right before we went to sleep, I asked my tent mate to pray for me, as I was feeling more ill than I had ever experienced before. I realized that I would not be able to hike back down to the vans and that I really had no other option but to turn to God. My friend agreed to pray for me and told me to work with the idea of causation as I was going to sleep. I thought about the fact that God is the only cause and that we didn’t need to try and find a material cause for illness, because it is impossible to link a physical effect back to any spiritual cause. I was reminded of a neat healing of stomachaches I had had earlier with this idea, which brought about a sense of hope and peace, because I could apply this idea again.

In the morning, I woke up feeling a lot better, though I was still experiencing a pretty big headache. During our pre-peak inspirational meeting, however, two ideas were shared that I thought about all day. First, a friend quoted from Hymn No. 144: “In atmosphere of Love divine, / We live, and move, and breathe,” which I loved because of that combination of living, moving, and breathing. Then, a line from another hymn was offered, about “the freer step, the fuller breath” (Hymn No. 218). I really loved this idea because I was also struggling with fatigue in my legs. This hymn combated both suggestions. I also liked thinking about gaining strength and freedom with each step instead of it becoming more difficult.

Though it was a challenging hike, I made it up to the pass where we dropped our packs before the peak. While peaking, however, I started feeling really weak and did not actually believe that I was going to be able to make it to the summit. At one point, I broke completely down and said to myself, “I can’t do it.” As those words left my mouth, I realized that I had to completely surrender to God. While it seemed that a “limited Heather” might not be able to get up the mountain, I knew that with God, all things are possible.

Each time I turned to rely wholeheartedly on God, a burden lifted and I was able to hike with immense freedom. I was also humbled in thinking about Jesus saying, “I can of mine own self do nothing” (John 5:30).

I realized that I needed to let my ego go and put my frustration aside to rely on God. It also dawned on me that I needed to stop identifying myself as a limited mortal, which was an inspiration that I carried with me throughout the rest of the summer.

As I overcame these limitations and worked to overcome the material suggestion of acclimatization and altitude sickness, I enjoyed a freer hike and was able to make it to the top. I was extremely grateful for all the angel messages, which were exactly what I needed to hear, along with the support of my group.

After that life-changing hike, I was able to exercise with great freedom and climb many mountains without any problems. Every trip and peak I led for the rest of the summer was filled with even more inspiration, and I was able to support campers throughout their experiences. 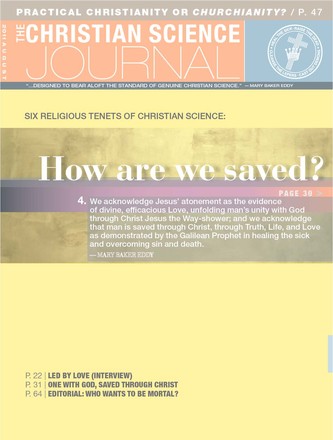 “These are God’s magazines,” a colleague mentioned...

How will people unacquainted with Christian Science find this Science beyond the grave?

Why is prophesying an evil?

How can Christian Scientists reach newcomers while still following the outline of church services in the Church Manual?

The kingdom is within

No personification of good or evil

The heart of forgiveness

The music of Church

The joy of freedom

Always in my right place

Who wants to be mortal?