WORK WAS MY LIFE. For years I believed that if I worked really hard, I'd have everything I'd ever dreamed of—including all the things I could ever want. My work was very stressful, and I often worked long hours for weeks on end without taking a break. But it paid off. After working my way to the top of my industry, it seemed I had it all. I owned a beautiful home and had the making of a perfect life. All my dreams were coming true.

Then one night, about four years ago, I awoke in great distress, unable to move my left arm or leg. Frightened and confused, I was rushed to the emergency room of a nearby hospital and told by the physicians that I had suffered a massive stroke. I couldn't believe it. This wasn't supposed to happen at my age! But the doctors explained that hereditary factors, in combination with the tremendous stress created by my work schedule, were the leading causes.

Following a month in the hospital, where I underwent intensive medical and rehabilitation therapy, I was told that I had suffered permanent damage to my brain. The effect of this damage was that the left side of my body was completely paralyzed. It was also difficult for me to understand and communicate with others. I couldn't comprehend even the simplest written words. My mental alertness was significantly reduced, and I suffered from sudden, uncontrollable seizures. Discharged from the hospital, I returned home in a wheelchair, completely dependent on others for my basic daily care.

For two years following the stroke, I returned to the hospital three times a week for ongoing physical, occupational, and speech therapy. I worked very hard, but made little progress. I slowly began to lose hope of ever returning to my formerly energetic and active lifestyle. And finally, the doctors and rehabilitation therapists gave up hope, too. They told me they had done all that was humanly possible for me, and that I wouldn't benefit from any further medical treatment. I was certified totally and permanently disabled.

I sank into a deep depression. Due to my physical limitations, my life seemed reduced to little more than just watching television. Why had this happened? I asked. Had I done something wrong? Was this God's will? No one seemed to have any answers. I spent most of the time feeling sorry for myself, wondering if my life was over.

One afternoon, something on the bookshelf above the television caught my attention. I wasn't certain what it was, but I couldn't take my eyes off it. As it turned out, it was a book that had been given to me some 25 years before but that had remained on the shelf, unopened and forgotten. The title of the book was Science and Health with Key to the Scriptures by Mary Baker Eddy, and it begins, "To those leaning on the sustaining infinite, to-day is big with blessings." Science and Health, p. vii. When those words were read to me, I felt a sudden and overwhelming sense of hope. Though I didn't know it then, my spiritual journey had begun—with this simple statement and its promise.

Several days later I opened up the book and my eyes fell on a passage. "The relations of God and man, divine Principle and idea, are indestructible in Science;" I read, "and Science knows no lapse from nor return to harmony, but holds the divine order or spiritual law, in which God and all that He creates are perfect and eternal, to have remained unchanged in its eternal history." Ibid., pp. 470-471. I stopped there and realized that not only was I reading for the first time in two years, but that I understood the spiritual significance of that statement. I glimpsed that in the divine order of the universe, all of God's ideas, and that included me, forever reflect God. So unless the nature of God had changed, I couldn't have changed either. Could the reflection of something ever differ for a moment from its source? It dawned on me that maybe what I was seeing in a disabled body wasn't the truth about what was really going on, wasn't what God saw or knew.

I started studying Science and Health daily, and reading from the Bible. These books soon became my constant companions, and for the first time in two years, I began to feel peaceful, hopeful. One morning I opened Science and Health to this statement: "When the illusion of sickness or sin tempts you, cling steadfastly to God and His idea. Allow nothing but His likeness to abide in your thought. Let neither fear nor doubt overshadow your clear sense and calm trust, that the recognition of life harmonious—as Life eternally is—can destroy any painful sense of, or belief in, that which Life is not. Let Christian Science, instead of corporeal sense, support your understanding of being, and this understanding will supplant error with Truth, replace mortality with immortality, and silence discord with harmony." Ibid., p. 495. A sense of peace and joy like I'd never known before flooded over me. What I'd begun to realize was that when you look through the lens of a camera and see a distorted image, you don't try to change the image. You simply change your focus. I realized that I'd spent several years trying desperately to change the image—the body—that I was seeing. Now I saw that it was my focus that needed changing. Focusing on the nature of God, I would see the true nature of His idea, expressed in complete freedom.

Later that afternoon, the telephone rang. Because of the paralysis, I'd become accustomed to reaching over with my right arm to answer the phone, which was located on my left side. This moment was different. I lifted my left arm and answered the phone, the way I had before the stroke. I knew, then, that this was a result of a change, not in the "image," but in my focus.

Over the next several months, the inspiration I was gaining from the study of these two books began to transform my way of thinking. The depression I had felt for so long turned into joy. I felt safe in the arms of my Father-Mother Love. I was understanding that all cause and effect belong to God, eternal good. I discovered that since God, or Soul, is limitless; Soul's expression, each one of us, couldn't be limited. For the first time in my life, I was seeing that as God's child, the child of Spirit, I wasn't subject to the so-called laws of heredity.

Even greater freedom came one morning as I read in Science and Health: "Citizens of the world, accept the 'glorious liberty of the children of God,' and be free! This is your divine right. The illusion of material sense not divine law, has bound you, entangled your free limbs, crippled your capacities, enfeebled your body, and defaced the tablet of your being." Ibid., p. 227. I began to weep with joy. The phrase "illusion of material sense" rang in my thought. Illusions, I knew, aren't real. They only seem real. So how could I be bound by one? I realized I'd been believing something about myself that was not true—seeing a so-called effect without a divine cause. But my right was liberty! I got up from my chair, unaided, and took my first steps alone.

I realized that I'd spent several years trying desperately to change my body. Now I saw that it was my focus that needed changing.

From that point on, I lived with this idea every moment of every day, and applied it to every belief of limitation. I discovered why the healing system explained in Science and Health is called Christian Science—because it is practical and provable, just like mathematics. When you apply the principles of mathematics to a problem, you find the solution. This is exactly what was happening as I applied the spiritual facts I was learning to every challenge I encountered. The solutions were there, waiting for me to see them. And over and over again, I did.

More than a year and a half has passed since I was introduced to that precious book on my shelf, a book that launched me on the most important journey of my life—a journey of spiritual discovery. Understanding the nature of God and my relation to Him transformed, and continues to transform, my life. Today, I am completely healed and free of any limitation whatsoever.

I have now realized that you are not what you do, because if you are, then when you don't you aren't. In actuality, each of us can only be who we really are, who God made us to be—Mind's perfect idea, "the same yesterday, and to-day, and for ever." See Heb. 13:8.

Doug Dombek lives in Southern California. He serves as vice president of The French International Culinary Association and is a trustee of the Berkeley Hall School in Los Angeles. 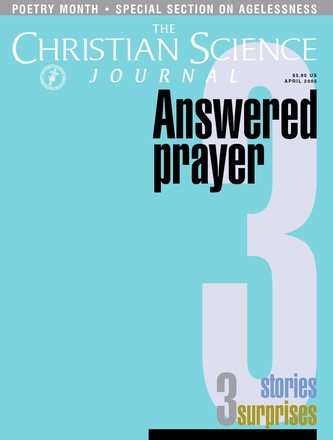 Mother of a nation

A NEW VIEW, A NEW LIFE

I could walk again

Think outside the age box

By Jenny Sawyer with contributions from Traci Fenton | April 2005

Not your typical All-American