Although I was lovingly raised in Christian Science by my spiritually dedicated parents, my adherence to Science was rather sporadic. I turned to Christian Science to resolve an inharmonious marriage and difficult business problems, but for years I drifted in and out of any serious study of these teachings.

While employed in film production and traveling worldwide, I began to practice personal habits not in accord with the teachings of Christian Science. I developed a serious problem with alcohol, eventually drinking to excess three or four times a week. At first it had little effect on my business and personal life because I drank so secretly that no one was aware of my addiction.

I could stop drinking for a month or two through human willpower, but I always returned to the habit. I became more and more depressed; my business suffered, and most of my social life and friendships were unfulfilling. I felt I could not discuss this problem with any one, as I was ashamed of the control alcohol seemed to have over me. The seeds of Christian Science had been planted when I was a child, however, and I attempted, in my own way, to understand and practice this Science.

One afternoon while in a Christian Science Reading Room I came across a passage from a letter that Mrs. Eddy, the Discoverer and Founder of Christian Science, wrote to a student. It said: "You are growing. The Father has sealed you, and the opening of these seals must not surprise you. The character of Christ is wrought out in our lives by just such processes. The tares and wheat appear to grow together until the harvest; then the tares are first gathered, that is, you have seasons of seeing your errors— and afterwards by reason of this very seeing, the tares are burned, the error is destroyed. Then you see Truth plainly and the wheat is 'gathered into barns,' it becomes permanent in the understanding" (quoted in We Knew Mary Baker Eddy, p. 90).

I had been in the midst of ruminating over my problems, particularly the lack of work. But this statement so impressed me, I copied it and took it with me. Shortly after returning home I received a telephone call from a production colleague, a Christian Scientist, who had been hired by The First Church of Christ, Scientist, in Boston, Massachusetts—The Mother Church—to videotape testifiers for presentation at an upcoming Annual Meeting of the Church. Unaware of my personal struggles, he asked me to work with him on the project.

I spent a joyous and uplifting six weeks traveling around the world and shooting inspiring testimonies of healings experienced by individuals through their dedicated study and application of Christian Science. My "harvest" truly had come! I not only recorded the healing testimonies; I also had the opportunity to meet and talk with the people who had been healed. This affected me tremendously.

Upon my return to the United States and the completion of the assignment, I was determined to burn the tares and gather the wheat, so to speak. I decided to turn as wholeheartedly as I could to the study of Christian Science to resolve my business, drinking, and personal problems. I spent many hours in a Reading Room poring over testimonies and articles in the Christian Science periodicals that were applicable to my situation, as well as reading the weekly Bible Lesson.

This statement from Science and Health by Mrs. Eddy was pondered daily (p. 407), "Let the slave of wrong desire learn the lessons of Christian Science, and he will get the better of that desire, and ascend a degree in the scale of health, happiness, and existence." I began to see my true self was not that of a human struggling to be free of addictive, destructive practices; but in reality, my spiritual birthright provided me with a joyous freedom from lack or limitation of any kind. I had the right to be free of addiction to alcohol, lack of work, and depression. They were not of God and could not be part of me, as God's loving and loved child.

One day, after several weeks of seeing myself in this light, I looked at a display of alcoholic beverages in a supermarket and realized I was not battling with myself, as I had in the past, over whether I should purchase a bottle. At first I couldn't believe it! I had absolutely no interest in drinking. The healing had occurred so calmly and effortlessly that for days afterward I wondered if I was really healed or if the desire would return. Then I remembered this statement from Science and Health (p. 322): "The drunkard thinks he enjoys drunkenness, and you cannot make the inebriate leave his besottedness, until his physical sense of pleasure yields to a higher sense. Then he turns from his cups, as the startled dreamer who wakens from an incubus incurred through the pains of distorted sense." I realized I had been awakened to the spiritual truth of my being, and the "tares [were] burned, the error [was] destroyed."

This healing has given me much-needed inspiration to apply these healing truths to all areas of my life. It has also made me more compassionate toward people who are involved in working out similar problems. I also was recently led to have class instruction with a devoted and patient teacher of Christian Science. Daily I think about and strive to emulate this thoughtful statement from Science and Health (p. 248): "We must form perfect models in thought and look at them continually, or we shall never carve them out in grand and noble lives. Let unselfishness, goodness, mercy, justice, health, holiness, love—the kingdom of heaven—reign within us, and sin, disease, and death will diminish until they finally disappear."

This article is included in:
1997 - PAMPHLET

Just one step: out of alcoholism 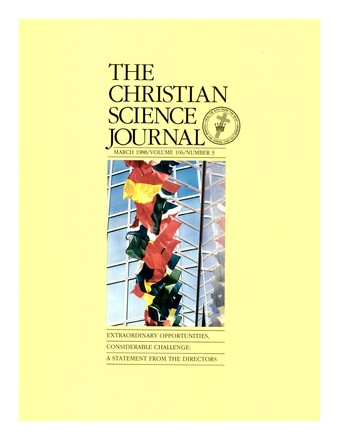 The inseparability of God's ideas

Christian Science healing is not guesswork

Moving free of the limitations of time

They answered the call: James A. Neal

Home and "the church in thy house"

Vital democracy in the branch church

"Where are the nine?"

"O win them back again"

By The Christian Science Board of Directors | March 1988

Taking hold of the Word of God

Answers are important—but so are the questions