Eighteen years into my career as an early childhood educator, I found myself without a job. One day, I was the director of a school of two hundred children, and the next thing I knew, I was a tutor at minimum wage. My husband had accepted a position he was offered in Hong Kong, and we had jumped at the opportunity to live in another country. He had found the greatest job of his career, whereas the opposite seemed true for me. We had been warned that the only job for the wife of an expatriate was tutoring or recording voice-overs. So, I chose tutoring. After just one week, though, I knew this was not my right place.

Instead of being frustrated or fearful, I turned for guidance to the one source of all wisdom—God, the one Mind. I had learned that putting God first always puts us on the right path. I reasoned that my purpose in life was to glorify God by expressing His qualities, which in turn would bless others, thus fulfilling the two great commandments Christ Jesus pointed out: loving God, and loving our fellow man. I knew that God wanted me to use all my talents—not just a tiny portion of them—and therefore He would provide me with the opportunity to express Him. This made perfect sense to me and was a great comfort.

An angel message (a thought from God) came to me to look at the local newspaper for work, something I’d never done before. I saw a little two-line ad that said, “General manager needed for six preschools, Montessori and traditional.” That was precisely my expertise. I called the number in the ad and was told to come in immediately for an interview. I met with the owner of these six schools, who said she had all but given up on finding someone to take her place so she could go back to England. And then it came to her to put one more ad in the newspaper. And that is the ad I saw. She said she needed someone to oversee six hundred students and about forty teachers.

As soon as we started talking, we both knew I was the perfect fit for the job. And we were equally grateful. I, too, had found the greatest job of my career—and I don’t mean as a general manager. I mean as a glorifier of God!

Our Father-Mother God always has so much more good in store for us than we could ever imagine or outline for ourselves. The receptivity to God’s guidance that brought about this healing was a result of studying the Bible and Science and Health with Key to the Scriptures by Mary Baker Eddy. These two books are our pastor, which is ever available for us to turn to for enlightenment.

As Malachi 3:10 says, “Prove me now herewith, saith the Lord of hosts, if I will not open you the windows of heaven, and pour you out a blessing, that there shall not be room enough to receive it.” 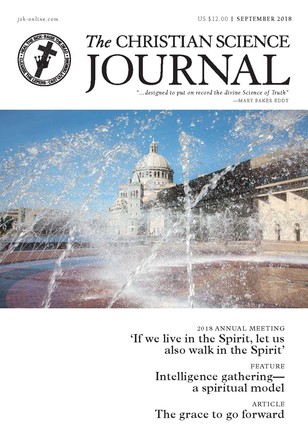 Why should someone concerned about the opioid epidemic read a Christian Science magazine?

The grace to go forward

A choice made in Gadara

Free from back problems

Such a beautiful story!

Preparing thought for the seed of Science

The ‘solvent of Love’ in the Christian Science Reading Room

Join the conversation about the Christian Science periodicals

Praying for each other